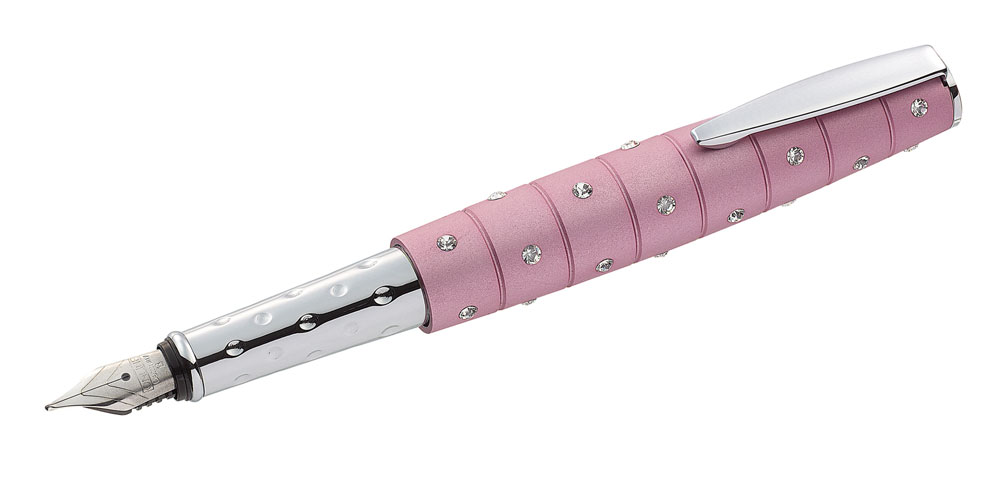 Ok, so if you’re a man thinking what to buy for the lady in your life, then there’s always a pen. And before you say anything – no it’s not boring at all. EVERYONE uses pens so you can’t go wrong if you buy a nice one.

Buying useful things is wrong if you’re talking about an iron or a blender but not when it comes to pretty things which just happen to be useful too.

There’s a site called NotYourAveragePen.com which has loads of pens which are a little bit different. I particularly like the Crystal Inspiration Romance Fountain Pen in Wild Rose. (I suppose you could call it, the ultimate handbag accessory – but not in ‘a Paris Hilton absurdly small pooch in a massive Mulberry’ kind of way.) The pen is embellished with sparkling Swarovski crystals and comes in a beautiful leather case. You can even personalise it, if you so wish! Put it this way, I’m a woman, I love Christmas, I love surprises and would love one of these pens.

I know it’s not good to use teen-speak words like ‘cool’ when you’re past a certain age and actually have teenage children yourself but it would be pretty difficult to describe the new game Mindflex without using the word ‘cool’.

Who’d have thought that one day the dream of moving an object with the power of your mind would become a reality? The new game from Mattel really has revolutionised game-play by putting the power of movement in players’ minds. Mindflex uses technology that works like a simple EED monitor and the sensors in the player’s headset measures brainwave activity. Sounds like sci-fi doesn’t it? But it’s not – it really works. It’s not cheap at £80 but it’s a game a family with older children could play and enjoy as well as groups of blokes together, girly nights-in, a game to play with any group in fact even the in-laws!  Here’s a review I found. What can I say? Mindflex really is ‘cool’ and would make a fantastic pressie for just about anyone.

If you’re looking to get some champagne in this Christmas and New Year then try Aldi. Yup, really – ALDI. Their Carlin Cru Champagne is only £14.99 but tastes as good as any of the other leading brands. While you’re there, pick up some of their chocolate reindeers too. They look as good as the famous Lindt bunny and, according to Mr. C and the kids, taste as good too!

Aldi is one of those supermarkets that many of us turned their noses up once at once upon a time. But I swear once you’ve been there once, you will go there again and again. It’s so unbelievably cheap and contrary to popular belief, it’s not only stocked with bargain-basement stuff. As sure as ‘eggs is eggs’, Aldi will save you money this Christmas!