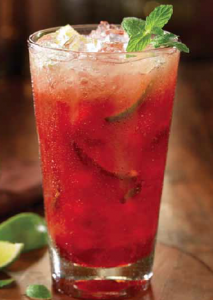 A few weeks back we went up to visit our eldest daughter in Aberdeen. Helena has been living and working in Aberdeen since she left Uni and loves it up there. Obviously I’m happy she’s happy, has a great job, lovely boyfriend and all the rest but Aberdeen is flipping miles away so every visit is a trek and a half! Cardiff Airport doesn’t offer flights to Aberdeen, otherwise we’d fly every time. We have flown from Bristol but we still had to leave our house in Cardiff at stupid o’clock to drive an hour, park and be there an hour before. Granted flying gets you to Aberdeen quickly but with all the faffing around beforehand, you sometimes wonder if it is the best option. My other bugbear is that every time we want to go, the prices seem to go off the scale.

Anyway, I’m fortunate that Mr. C is one of those rare bods who actually enjoys driving. I don’t get it personally but who am I to gripe when he’s more than happy to sit in the driving seat at 6 am 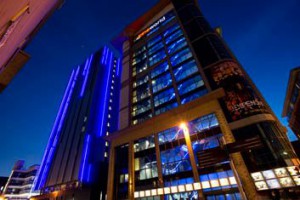 in Cardiff and power forward for the entire day to get us to Scotland same day?! He has driven up in one go once but usually we have a stopover somewhere and then do the last few hours the next day.

This time he drove us to Glasgow in record time (and yes we do stop every two hours or so for coffee, wees and whatever unhealthy snacks we happen upon!). I think we left at 6 and were parked in Glasgow around 7/8 or so hours later. I think Mr. C probably could have kept going but Aberdeen is still another few hours past Glasgow so better safe than sorry…. 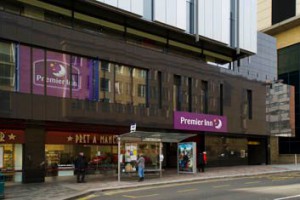 We stayed in The Glasgow Buchanan Galleries Premier Inn – one of numerous Premier Inns in Glasgow – which is smack bang in the centre. Check-in was as painless as ever. A super-friendly ‘meeter and greeter’ directed us to the self-check-in machines. I tapped in the name and two key cards promptly appeared from the slot as if by magic. As fate would have it, we arrived at the room to find the keycards wouldn’t ‘give us the green light’ . Mr. Meeter and Greeter sorted us out though in a 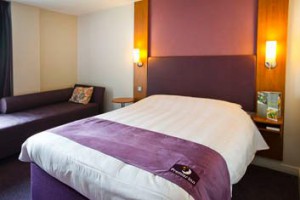 blink of an eye and within minutes we were in our room. It was absolutely huge and most surprisingly had a chaise lounge in it. In a Premier Inn – who’d have though hey!

As we’ve come to expect of the chain, our room in the Glasgow Premier Inn was brilliant value for money, contemporary, spotlessly clean and equipped with everything you need for an overnighter. The TV was a tad high on the wall but the bed was amazingly comfy and the room was really quiet so we had an amazing night’s sleep. As you know, Premier Inn say ‘A Great Night’s Sleep Guaranteed’

on their site. Usually I take these blurbs with a pinch of salt but we’ve genuinely found that we sleep like the proverbial logs whenever we’re in one. Once in the Brighton Premier Inn, we actually slept in till 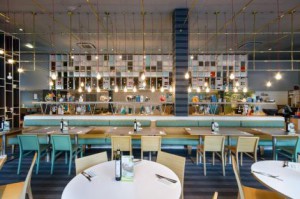 nearly midday. We hadn’t set an alarm as we assumed we’d wake at a normal enough time – mistake!

Our visit to Glasgow really was a flying one….. We decanted our bags and went straight out to stretch our legs. We wandered around for a bit before happening upon the Hard Rock Cafe where it being a Friday afternoon, I went for a Strawberry Mojito and then an interesting Margarita. Mr. C.  on the 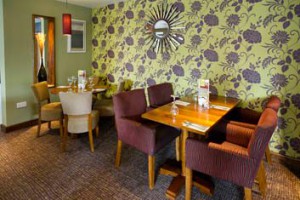 other hand, seemed more than happy with his Stella. I find it very hard to resist more exciting drinks when they’re on offer – I obviously don’t get out enough! We opted to eat that evening in Ask, just around the corner from the hotel. There were so many restaurants nearby that you really were spolt for choice though.

Breakfast next morning, in the newly refurbished Thyme Restaurant, was hot and plentiful with everything you’d expect including plenty of fresh fruit and croissants. We filled our boots and after a painless check-out, were on our way further North to The Granite City.