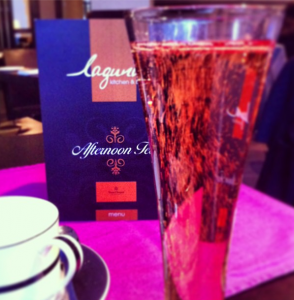 I’ve just come back in the house after a simply scrummy Afternoon Tea at The Park Plaza Cardiff! Such a civilised affair, oh so delicious and as Miranda’s friend would say ‘Such Fun!’. Mr. C was a bit outnumbered as the Laguna Kitchen & Bar  seemed to be ‘The Place‘ to go for girly gatherings and there were numerous tables where the glittery pink cupcakes et al were vying for attention amongst birthday presents and cards! 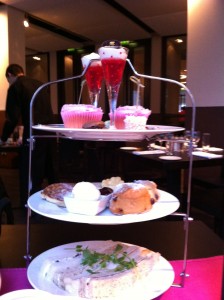 table. We opted for the Veuve Clicquot Champagne Valentine’s Afternoon Tea which at £25 per person seems to be pretty average nowadays. My mouth was watering just reading the menu …. ‘Freshly Baked Warm Red Berry Vanilla Infused Scones‘  Mmmmmmm …. Put the ‘Cornish Clotted Cream & Strawberry Preserves’ into the equation and I was sold. The rose champagne arrived first and those first sips of bubbliness set the scene for a lovely hour or so.

Toasted Marshmallow & Coconut Lollipops sounded a bit different to your common-or-garden tea-time nibbles and they didn’t disappoint. And both of us were raving over the Welsh Cakes, which I swear were the nicest ones I’ve ever tasted. They were warm and buttery and 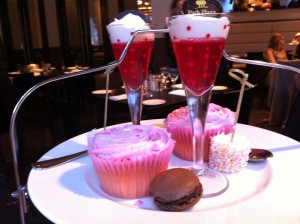 almost melted in the mouth. I’m not really into Macaroons but well when something chocolatey and cute is sitting in front of you you just have to try it, don’t you?

I know it’s the wrong way to do it but both of us ate our scones before dipping into the array of light finger sandwiches. They were warm and if we’d started on the sarnies first then our scones would have gone cold. Makes sense, yes?   Whoops – it’s tea we’re talking about and I nearly forgot to mention the actual ‘tea’. The usual suspects were on the Tea Menu and I predictably went for the Earl Grey which for me is the perfect accompaniment to afternoon tea.

The whole thing was a real 10 out of 10 affair and so it’s  definitely The Thumbs Up for Afternoon Tea at The Park Plaza Cardiff!

The Veuve Clicquot Champagne Valentine’s Afternoon Tea is available from now up until 17th February!