A few weekends ago we went off to Bruges for a weekend combining business with pleasure. After a stressful National Express coach journey down to London from Cardiff , we eventually arrived in St Pancras. Sending texts and emails is such a chore on the stupid flippin’ iPhone. I absolutely hate it with a 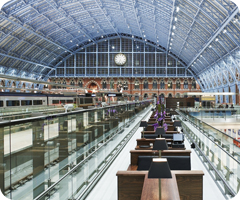 Anyway back to St Pancras… Last time we went to Brussels with EuroStar we had intended to visit the world-famous Champagne Bar and indulge ourselves a little with our faourite tipple. However The London Underground didn’t want to ‘play ball’ on that day and so we had no time.

This time, we deliberately chose to arrive in St Pancras a couple of hours early so that we could ‘do the Champagne Bar’. The station itself is amazing and the atmosphere in the covered areas is quite unique. We were shown to a table right alongside the track that our Brussels train was parked at and were shown the controls for the heated seats and where the blankets were, should we need them. After having a good look through their very extensive (or was it expensive?) menu and wine list we plummed for a couple of glasses of the bubbly, half a dozen fresh oysters and some marinated olives. Such decadence, I know, but every word has its place in the dictionary and decadence had its place in our social agenda on this occasion! It was heavenly! The Champagne was delicious, the oysters took him to the ocean and back (oysters aren’t my ‘cup of tea’), and the olives – well, they were very…. ‘nice’ olives. All in all, the stresses accumulated in the previous few hours were washed away and we embarked on the rest of our journey, seeing the world through much rosier tints.

It all beats the hassles of Heathrow and stresses of Stanstead, loitering at Luton and the Gatwick grind! Let the train take the strain and you’ll feel better for it.