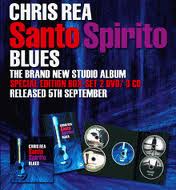 It’s a long time since I last sat down and listened to anything by Chris Rea, but his new album Santo Spirito Blues was on the shelf and needed an opinion.

The first couple of tracks didn’t inspire straight away, but his ‘On The Beach’ album is still to this date one of my favourites so I felt there must be some magic to come. It took a little while, but once tracks like ‘Electric Guitar’ and ‘Money’, with their early ZZTop rhythms and ‘Lose My Heart In You’ with its melifluous Tom Waits-style melodies came along, it was obvious that he could still deliver.

It’s not a get-up-and-go album so much as an album to sit back and drink good whisky to. It’s polished, enjoyable, relaxing and, as it says on the tin, is down-and-out good quality blues for those times when the doctor prescribes a dark room with bucketfuls of mellow thoughts and some tapping feet.

The weaker opening tracks prevent me from giving the album a full five stars, but overall, it’s a big thumbs-up for this latest offering from Chris Rea