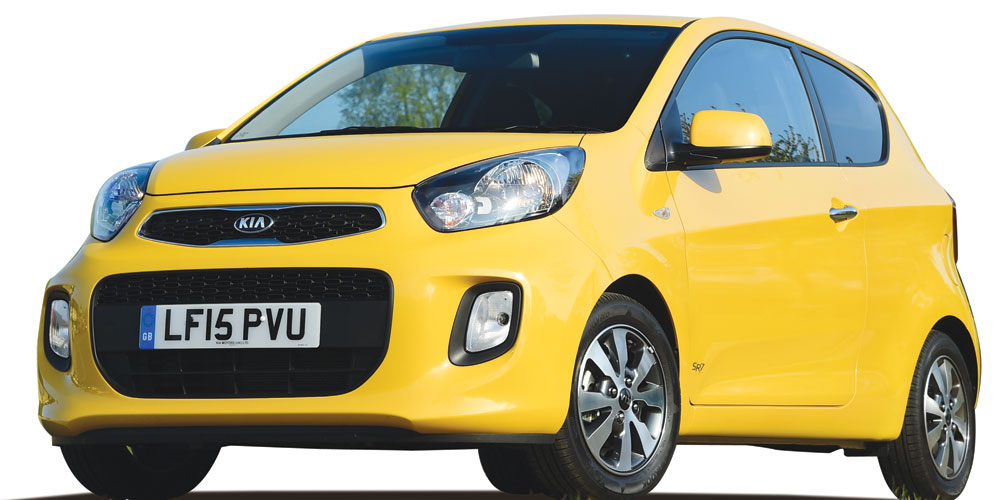 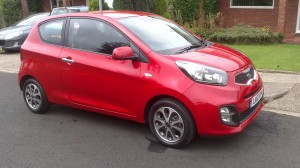 This is an interesting one… a two-pronged fork, so-to-speak, about spending a week with the little Kia Picanto City.

I’ll start with Mrs C’s view and then you can see what I thought about it all.

“Argghhhhh …. I’ve just been asked what I thought of the Kia Picanto which Mr. C and I had to trial a few weekends ago. I hasten to add that it arrived 2 days after I came out of hospital after a 10 day stay involving two operations, two lots of general anaesthetic and a shed-load of pain-killers! What I’m trying to say is that I wasn’t at my most perceptive – not that I’m ever all that perceptive commenting on cars but hey at least I’ve got a modicum of an excuse. 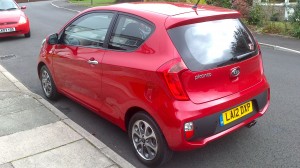 Ok so the car was red, not a bright in-your-face shiny red but a dullish more pedestrian kind of red – that much I can remember. No doubt I’ve alienated at least 60% of my readers now – all the men plus a proportion of the women who think I’m ‘letting down the side’ by commenting on the colour first. But come on, it’s a distinguishing factor! I can’t remember exactly what it looked like inside as I don’t have Mr.C’s photographic memory when it comes to all things car-related but I recall that it didn’t have the look of a spartan diddy car inside. It looked more expensive than it actually was and was really pretty impressive.

The Picanto seemed to be a nippy enough ride around town but as I couldn’t actually drive for fear of tearing out the staples in my spine and hip, I have to rely on Mr. C’s impeccable sense of judgement when it comes to this sort of thing. (see above) 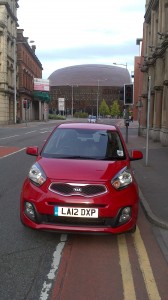 The other thing that comes to mind when trawling through my head for things to say is that the car was small enough to fit into relatively tight parking spaces – always a bonus! It was a comfortable ride too and wasn’t one of those ‘sicky-making’ cars that make you sway from side to side constantly and make you feel as if you’re crossing The Channel in a Force 10 with sick-bags aplenty to hand.

For the record, I like small cars – I love being able to park quickly, I love the fact that the insurance is usually cheap to reasonable and I love their general nippiness. The Kia Picanto ticked all those boxes – I wonder if they do a yellow one……..”

An interesting take, I suppose.  Here are my thoughts…

“I’ve been there, seen it, done it, bought the T-shirt when it comes to the ‘baby’ cars.  I managed to clock up over 40,000 miles one year in a Fiat Panda and have also owned a Citroen C1 as well as having had the opportunity to drive many other ‘tiddlers’ over the years.

Then recently Mrs C was loaned the little Kia Picanto and I thought I’d take it round the block a few times myself to see what it could offer. 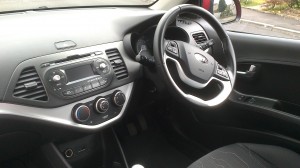 First impressions were those of a surprising opulence for such a small and low-budget car.  It really was surprisingly comfy and well-appointed inside.  It didn’t look too bad from the outside either!  It’s got quite a sporty look to it, with the chromed twin-exhaust and great looking alloys it really would not put off a street-wise young driver who wanted something to look impressive to his mates, but without having the associated impressive insurance arrangements.

I suppose I was unfortunate to have also been driving something with over 200 horses packed under the bonnet the week I tried the Picanto, so it would always pale by comparison performance-wise. But when driven as this type of car is meant to be driven – with a heavy foot and a light heart – it actually really shines.  It was light and easy to control and even though a little slow off the standing start, once those revs were built up it nipped around town quite happily, purring quietly away and not complaining about its abusive controller. 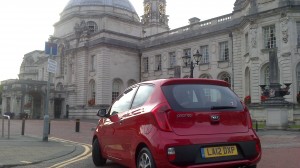 It was even happy at motorway speeds, although I have to say that it started to sound a bit noisy when it reached 70.  This is definitely much more a city car than a grand tourer.  Saying that, it would be completely unfazed by the suggestion of a longer run.  Plugging the iPod in and cranking up the volumes to ‘in the club’ levels would completely mask the noise anyway I would think.

It’s also surprisingly spacious.  The boot is about average for a ‘baby’ car, but nevertheless would still comfortably accommodate a few week’s worth of washing for Mum on a weekend Uni break. 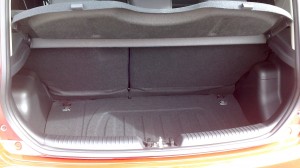 As a 3-door, it isn’t really a practical family car by any stretch of the imagination, but all in all, it’s a cheap, nippy, good-looking ‘little’ car that would offer great value for money and would be perfectly suited to a young or new driver.”

Did I enjoy it?  To be perfectly honest I always enjoy trying new cars.  Some don’t really inspire me, some do.  The Kia Picanto definitely has its place in the market and it fills it with this competent, stylish little performer.