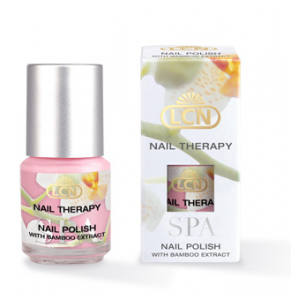 As many of you will know, I’ve got quite weak and brittle nails so I was really keen to try out the LCN Nail Therapy SPA Nail Polish.

I bought the Rose colour which I thought was pretty for the Summer. Neutral(ish) and goes with most of my Summer clothes anyway!.

I was a bit disappointed that it needed two coats just for a basic coverage but that was made up for by the fact that my nails didn’t appear to split or flake in all the time I was wearing it.

The main active ingredient in the LCN Nail Therapy Polish is bamboo which you’d think was a weird thing to put into a nail polish. However it says somewhere on the LCN website that the bamboo extract covers the nail with an elastic film to protect it against extreme stress. This in turn improves the nail’s structure apparently. 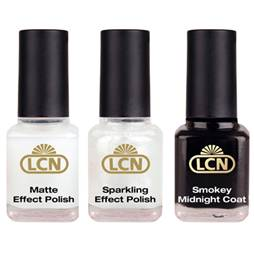 Another LCN Nail Polish I really like is the LCN Sparkling Effect Polish. The first time I wore this I put it on top of a nail polish I’d been wearing for two days. It sort of rejuvenated it a bit and almost looked like I’d redone my nails. At the moment I’m wearing it on it’s own with nothing underneath and it looks fine. Kind of like a more upbeat clear nail polish. ( I’d take a pic and show you but I can’t work my new phone yet!)