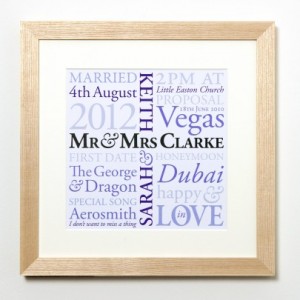 It was my youngest daughter’s 21st a couple of weeks ago and I’d been racking my brains for a while, trying to think of something ‘a bit different’ for her.

I’d already bought her a few bits and bobs when I stumbled upon a site called The Travelling Souk   which is now going to be my ‘Go-To’ site when it comes to looking for presents for almost any occasion. It’s a veritable treasure trove of gifts – weird & wonderful, some inexpensive and some not. The eclectic range means that you should be able to find something for everyone and I reckon, I’ll be putting that theory to the test over the year.

Back to the 21st birthday in question though, something that caught my eye on The Travelling Souk was ‘My Time Frame‘. The way this works is you choose a series of words/dates which make up a word picture of someone’s life. So, say you were going to buy it for a wedding present, you may include the names of the bride and groom, the date of the wedding, the place they met, where they’re going on honeymoon, dog’s name, fave film, birth-signs, baby’s name, favourite songs etc…. in a nutshell you can choose anything which you feel symbolises the couple. 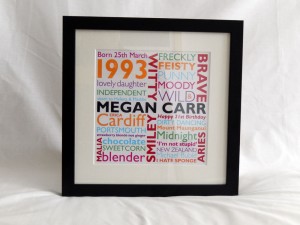 So I put together what I thought was a good mix of words to create a picture of Megan’s life so far. I then emailed said list to her sisters just to check if they had any additional ideas and when I was happy I chose the frame and sent the list off. Well the Time Frame came back within days and I was chuffed to bits with it. When we gave it to to her on her birthday she looked over-the-moon and actually seemed quite overwhelmed. It’s a great present and is a talking-point too. Michael Buble everyone gets but why does it say Mount Maunganui and why ‘I hate sponge’? Freckly, feisty, punny …. words which make sense to anyone who knows Meg but why ‘blender’?

It’s probably one of the best and most original gifts I’ve ever given and considering it’s a unique piece of personalised artwork, it was a real bargain!