If you ever get the opportunity to stay at Pennyhill Park Hotel and Spa, then jump at the chance. For starters it’s five star so virtually guaranteed excellence and secondly it’s just one of those really special places. Pennyhill is a member of Exclusive Hotels and they make a habit of being good at being special. In fact it’s got to be said that ALL my fave hotels belong to the Exclusive group.

Pennyhill is one of those hotels where service is 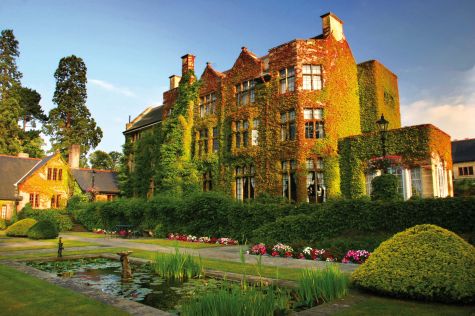 absolutely paramount. From checking in at reception, to visiting the Spa, to ordering a cocktail – the service was seamless and unobtrusive when we went. Every member of staff, we met during our stay, smiled and it seemed to generally be a very friendly, obliging place. One of the chefs was chatting to regulars at breakfast as if they were ‘old friends’. Actually they probably were ‘old friends’ because I can imagine that most guests will want to go back again and again once they’ve been once. And what greater praise can you give a hotel really?

We ate in their recently refurbished award-winning Brasserie but the Latymer Restaurant with a spectacular 4 AA Rosettes is on my list of restaurants I really want to try one day! Not that I’m a name-dropper or anything (oops dropped it!) but Jeremy Vine was eating on the table next to us at The Brasserie and there were a couple of other ‘faces’ I recognised scattered around too.

We spent a lovely afternoon at The Spa which was wonderfully restful although I found the Women Only and Men Only sections a little strange. Personally I haven’t come across separate areas in the Spas I’ve been to before and as I went with Mr. C, it meant there were lots of areas we couldn’t go to.

All in all, our night at Pennyhill was both memorable and relaxing and one day when we’ve saved up, we WILL go back!