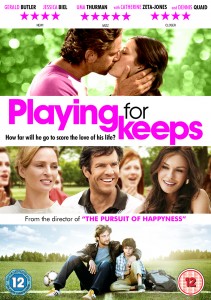 I’m a sucker for a good Rom-Com so happily sat down last night to watch Playing for Keeps, the latest offering from Gerard Butler. He’s pretty easy on the eye and his films are rarely ‘taxing’ so getting comfy on the sofa with Mr. C. a glass of wine and a massive bar of chocolate I was optimistic that it would be a pleasant enough couple of hours. And no surprises – it was a lovely little film and the Cadbury Marvellous Creations Cookie Crunch was pretty good too.

Playing for Keeps is a movie where Gerard Butler is a down-on-his-luck ex football star who really wants to get back with his gorgeous ex-wife Jessica Biel. 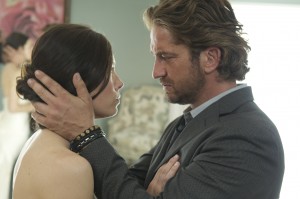 Without giving too much away, he basically becomes the football coach to his son’s team and spends the film fending off the advances of the ‘soccer moms’ aka Catherine Zeta-Jones & Uma Thurman amongst others.

His son Lewis was played brilliantly by a boy called Noah Lomax and I think we’re going to see a lot more of him. Why are American child actors virtually always streets ahead of other child actors?

Buy Playing For Keeps from Amazon