That lovely time of the year, when we set off for our annual summer holiday, is one of the most exciting times in our calendar. I don’t subscribe to the view that holidays are stressful.  After many months in the office I can switch off from the moment we close our front door.

However, when you’ve got an early flight to catch, it can be a bit nerve-racking doing battle with the UK’s motorways, knowing that one hold-up can jeopardise your chance of getting the flight, so the obvious answer is the ‘overnighter’!

We’ve done them loads of times; get to the airport the evening before, get the car safely stowed for its fortnight of rest and corrosion, unwind over a beer or two, and generally get as well into the holiday spirit as you can before actually flying to wherever you’re going. We’ve done expensive, where the G&T costs as much as a three course meal just down the road, and we’ve done cheap, where you get hot and cold running water….. (down the walls!). Both served a purpose, but on a couple of occasions now, we’ve used Premier Inn‘s facilities at Gatwick.

It’s an absolute breeze! Drive into their car park, check in, put hanging ticket inside car window and that’s it! Nothing more. The car park was actually at the hotel, so there was no need to move it once we had arrived. They’ve a really nice bar area for the aforementioned refreshment, a restaurant, where 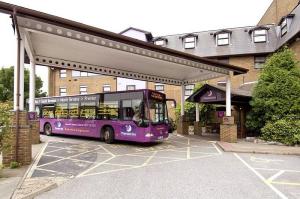 we were served a most hearty!!! portion of Steak Pie and an air conditioning unit that brought icicles to the end of my eyelashes. Our waiter was most accommodating though, and he kindly turned the Arctic chill off for a while.  Once Mrs C had regained her ‘boiling’ mode again we retired for the obligatory night-cap. Our room was perfect: roomy, air conditioned, comfortable, quiet. Everything you’d want and expect from a good hotel, but the prices are absolutely amazing! We have nothing but praise for the staff who were all, without exception, pleasant, helpful and friendly. Each room can accommodate Mum, Dad and two kids, but they also have interconnecting rooms available for even larger tribes.

Everything is so convenient. You can either walk the short distance across to the North Terminal or you can take one of the frequent shuttle buses to either terminal. The following morning saw us into the South Terminal, doing battle with the holiday hordes in ample time to rest and relax again in departures. Mrs Duty Free advised us that we’d won a mega-sized family pack of Chocolate Eclairs when we handed in one of those “You Have Won” bits of paper we found. What a pain, we had to stuff a few of these down to ensure we weren’t contravening the cabin baggage allowances. Mind you, looking at the size of the cases that some other passengers were dragging around, I think they were taking additional family members in luggage instead of on seats, so we had nothing to worry about!

We do this ‘enjoying 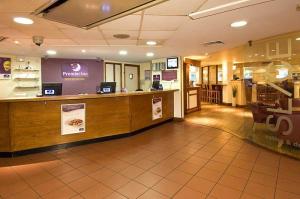 ourselves’ big-style when we go on holiday and can’t understand what causes all the fights, ill feeling, divorce, assault, murder that we read about in the popular press. Even when we arrived back tired, weary and ready to sleep, we popped back over to the hotel to pick up the car, and even then, it was a breath of fresh air.  No wonder Lenny goes there!  Everything was so well organised and the staff were so pleasant that we were reluctant to leave.  However, duty had to be done and we set off ready to prepare for next year.

One thought on “Premier Inn – Our First Choice at Gatwick”