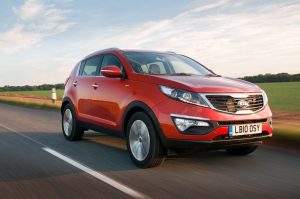 here are my thoughts:

I had the pleasure of driving the Sportage both last year and the year before.  It doesn’t pretend to be a ‘special’ car, and its price certainly keeps it well below that of many of its competitors.  What theSportage really does offer though, is value.  It’s a hell of a car for the price!

This year’s drive was the 2-litre diesel automatic, the 2-wheel drive version.  It’s built for a long motorway trek, I swear.  Why motorway? I hear you ask… it’s not a particularly fast car. No it isn’t, but those who have driven some of Britains motorways recently must surely agree that opportunities to even threaten to exceed the national speed limit are few and far between, and who needs to exceed them anyway?  If you can purr along at seventy, in a quiet environment, cruise control on, music serenading you and your passengers, then why would you want supercar performance?

After our run down to the busiest tourist destination in the UK on the busiest weekend of the year, we were still able to arrive relaxed, refreshed and non-the-worse for our five hours on the road.  Even the guaranteed Launceston bottleneck didn’t spoil the day.  Being perched just that little bit higher than you would be in a traditional saloon, it’s much easier to see what’s happening up ahead and therefore things don’t seem so bad.  I have to say though, that an automatic gearbox is an absolute Godsend on a day like that.

If I was put on the spot and asked what I particularly liked about the Sportage, I think I’d be a little stuck for words.  However, and this must reflect exceptionally well on Kia, if I was asked what I disliked about it, I would be equally speechless.  What it does it does really smoothly, inconspicuously, economically and comfortably.  It doesn’t turn heads in the car park, but surely that’s good!