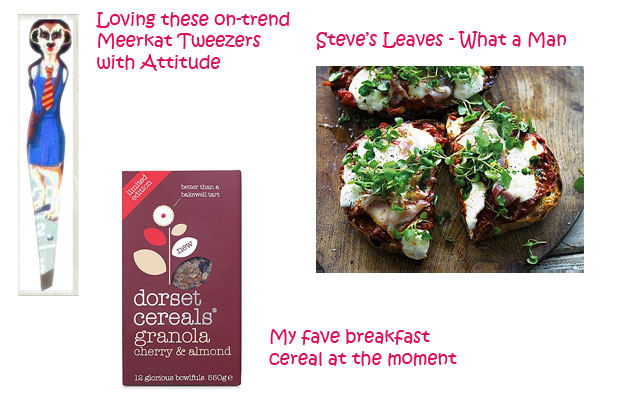 I bought a bag of Steve’s Leaves in Sainsburys the other day – Pea Shoots & Baby Leaves as it happens. When I got back home I googled him and became seriously intrigued by Steve’s Leaves site and blog. I had no idea there was so much to know about watercress. I quote from his site…”Steve began his PhD in the nutritional physiology of watercress in 1980 after deciding that studying the genetics of sphagnum moss wasn’t for him”! Sounds yawny, tastes fab!

I love Dorset Cereals although they are not our ‘everyday’ cereal – I’d eat way too much as they’re so nice and a box wouldn’t last any time at all. Their porridges are good but personally I’d prefer to make my own porridge, stir in a banana whilst its cooking and sprinkle blueberries on it before serving! Yum! Dorset Cereals Cherry & Almond Granola is my all-time favourite. Register on their site. I did and am now a flipping addict of their Spin The Bottle Competition. Do you know anyone who’s ever won because I never do. Not fair!

Tweezers with Attitude from Alida are brilliant tweezers and cheap too. The Meerkat tweezers pictured are adorable and I can imagine them appearing in many a Christmas Stocking this year!