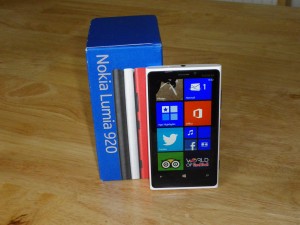 I’ve never been one to enthuse about the latest and greatest when it comes to things like mobiles, as I’ve traditionally stuck to quite basic offerings from Blackberry, Sony and HTC.

So when the opportunity to try the new Nokia Lumia 920 Windows phone arose I thought I’d grab the bull by the horns and give it a go.

The Lumia 920 is a very attractive phone, if a little big for my liking.  However, once you start using the superb colour touch screen you become drawn into everything it offers.  It is incredibly fast, with a host of standard applications that cover almost anything you need to use on a day-to-day basis.  The screen is a dream to use with an intuitive drag & drop action for almost everything and a fascinating ‘tiling’ option for the home screen where you can custom arrange your favourites in a pattern of your liking using small and large versions of the tiles to create your own personal mosaic.

Every screen is presented in a clear and attractive way, with subtle, yet very attractive animations, with menus being navigated in both a vertical and horizontal way. 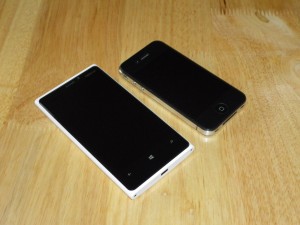 The Zeiss-lensed camera is exceptional and the quality of the photos I took was as good as those taken with my own Pentax Optio80 stand-alone. The Windows phone has its own Creative Studio to add instant filters and effects from the moment you take the photo, similar to the system more recently popularised by Instagram.  Everything ties-in seamlessly with your Windows Live account, so even uploading your snaps is done invisibly in the background.

A worrying issue was the fact that on a couple of occasions, the phone simply hung – i.e. stopped functioning, and the only way out of this was to carry out a ‘soft reset’ by holding down two buttons simultaneously until it started up again.  I have noticed from many of the Nokia support forums that this is a rather common and unfortunate problem amongst Lumia 920 users judging by the number of reporting the same issue.

One other down-side I found was the fact that you’re quite limited by the number of Apps available in certain categories.  There are literally hundreds of gaming apps available to suit all ages and tastes, but when it comes to finding, for example, an App to allow you to do your online banking, you are severely limited. With Android and iPhone, you have the support of most of the banks and retailers, as well as other developers out there.  I’m sure, in time, that many organisations will develop applications compatible with the Windows phone, but at the moment there is limited choice available.

For those who enjoy the large bright and intuitive Windows interface this is a fantastic, easy-to-use phone, which though large and heavy is an attractive and stylish unit.

So to summarise, while it was working it was a fabulous piece of kit, definitely meriting the thumbs up score but the hangs and resets let the side down a bit. Therefore I’m afraid I’m going to have to leave it with a less-than-favourable review.