After a night spent on the outskirts of Detroit in the Hilton Garden Inn in Novi, it was time to venture even further west to Chicago.  The journey down through Michigan State was quite entertaining, with us marvelling at place names like Climax, in Kalamazoo County, Sprinkle, Springfield (about the fourth one of those since Cape Cod… and still no Homer Simpson!), Valparaiso and Gary.

This was an interesting trip for me as it was in fact a repeat visit to Chicago; although my last visit was way back when I was only 9 years old!  Despite my youth at the time I have enduring memories of what was one hell of an adventure for a nine year old. 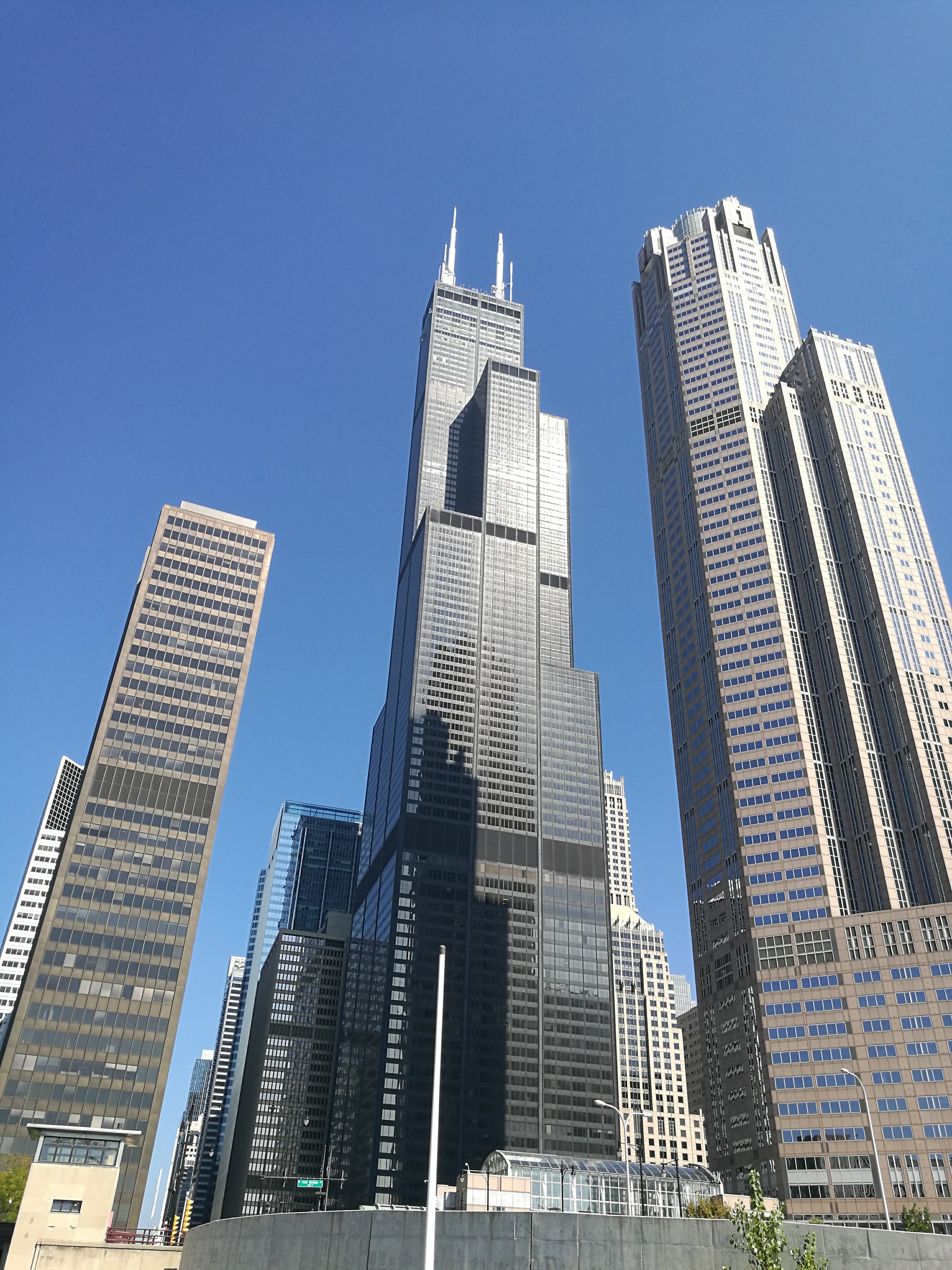 Parts of Chicago have hardly changed since back in the 30s, but large swathes have changed beyond recognition.

Our approach into ‘The Windy City’ brought us up from northern Indiana, driving on the Interstate 90.  This is not an experience for the faint-hearted I can assure you.  All is fine, our sat-nav trying in vain to point us in the right direction until our 12-lane-wide highway split into 4 different sections.  We ended up going into Chicago’s ‘Chinatown’ and actually marvelling at some of the street artwork.  But then….. Aaargghhh! Tunnels!  Miles of them, again many lanes wide and again splitting into different roads every few hundred yards.  After two or three minutes I had absolutely no idea whatsoever where we were, and all I could hope for was slivers of sunlight and to try to get outside under some clear sky to re-plan the route to our final destination, the AC Hotel on Rush Street, just a block away from the ‘Magnificent Mile’ on Michigan Avenue.

As it panned out we emerged into daylight only a short distance from where we needed to be and in spite of the one way systems, we managed to find the hotel and get parked up in its own car park with the minimum of fuss. 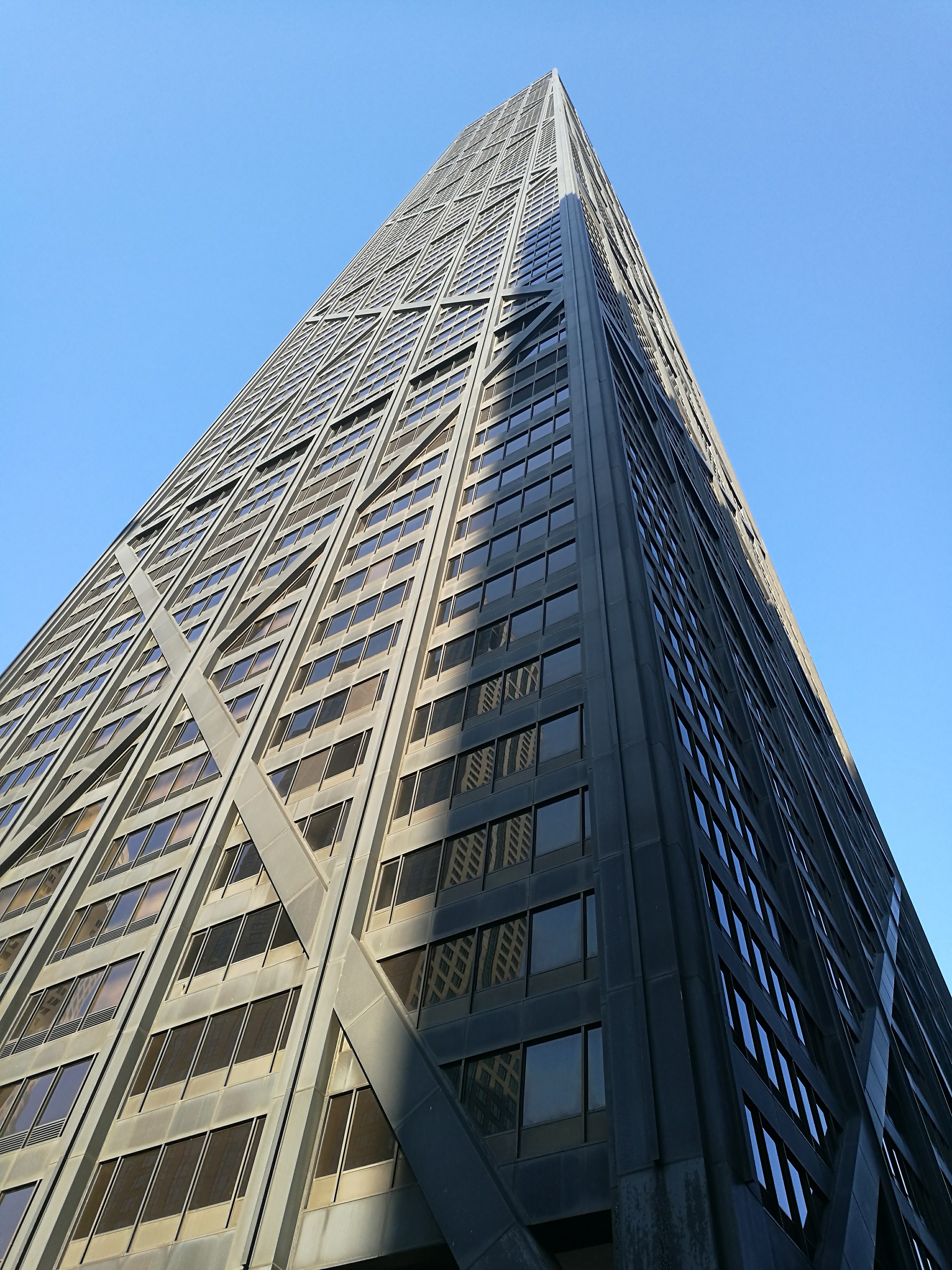 We were pre-armed with a Chicago CityPass each, so with minimal delay we hit the streets and wandered up to the John Hancock Center, home of 360 Chicago, a 1000+ foot high observation deck close to the banks of Lake Michigan, with great views of the skyline and out over the lake.  It really is awe-inspiring and warranted an impromptu bottle of beer while sitting watching the sun going down over western Illinois. 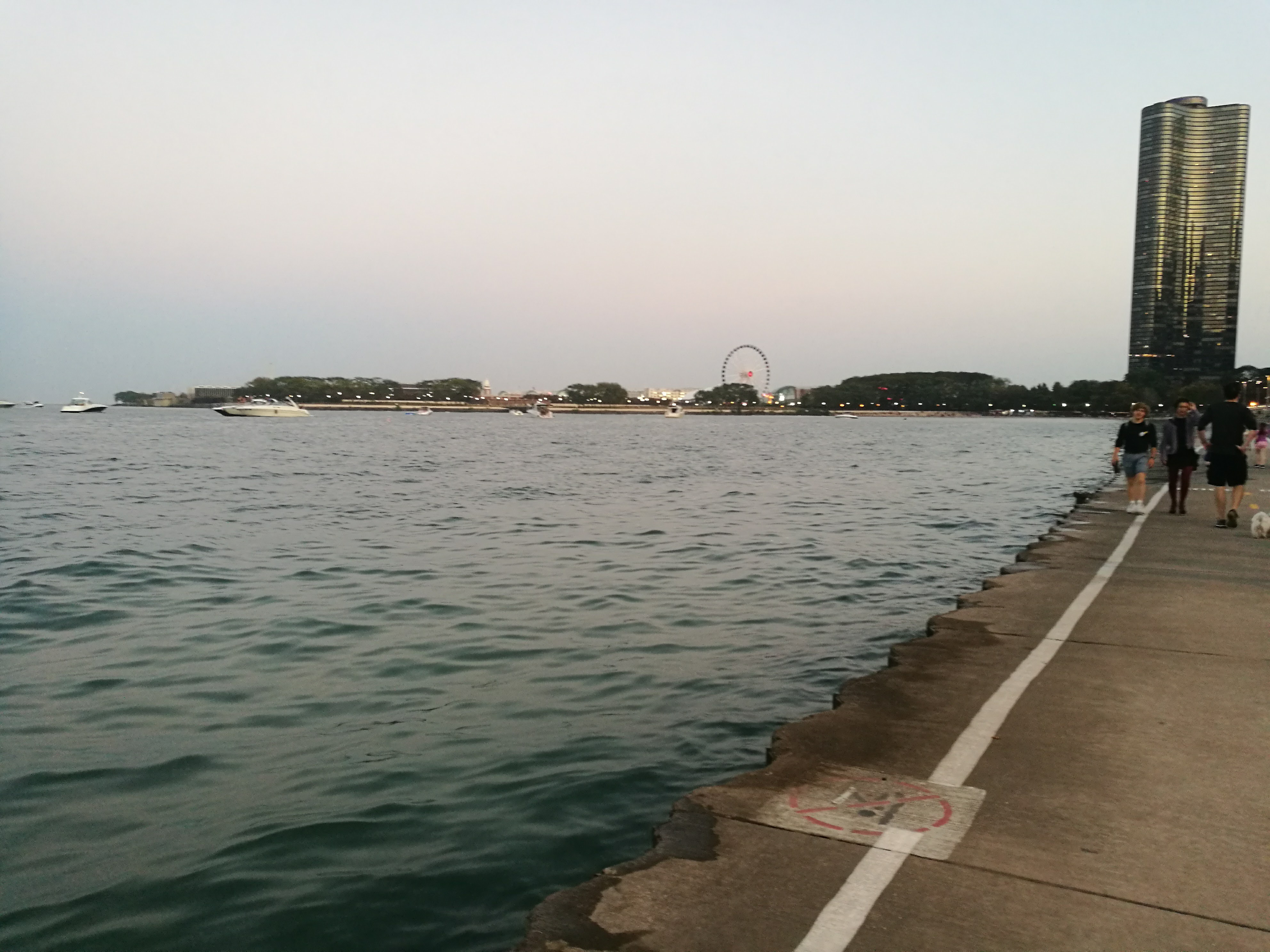 Later in the evening we went for a walk down Lake Shore Drive, skirting the banks of the lake, to the newly rejuvenated ‘Navy Pier’ a former Navy flight training school, now converted into an entertainment and leisure complex, with lots of attractions together with numerous eating and drinking places.  When we finally made it to our hotel we were fit to drop and settled down for a good night’s sleep in our contemporary, clean, fuss-free room.

The AC Hotel is a brilliant home-from-home in downtown Chicago.  It has a nice bright swimming pool, a fitness centre and the ‘Safe House’ restaurant in the basement is a real good-fun spy-themed night out.  Each visitor is assigned a codename and they then have to follow a series of challenges to leave when they’re done.  A fascinating and different dining experience.

Sunday saw us up bright and early and ready to make the most of our short stay.  A lovely breakfast in the AC Lounge, complete with free entertainment in the form of a lady clearly still under the influence of something she’d taken through the night, dancing and performing yoga moves while talking and laughing to herself. 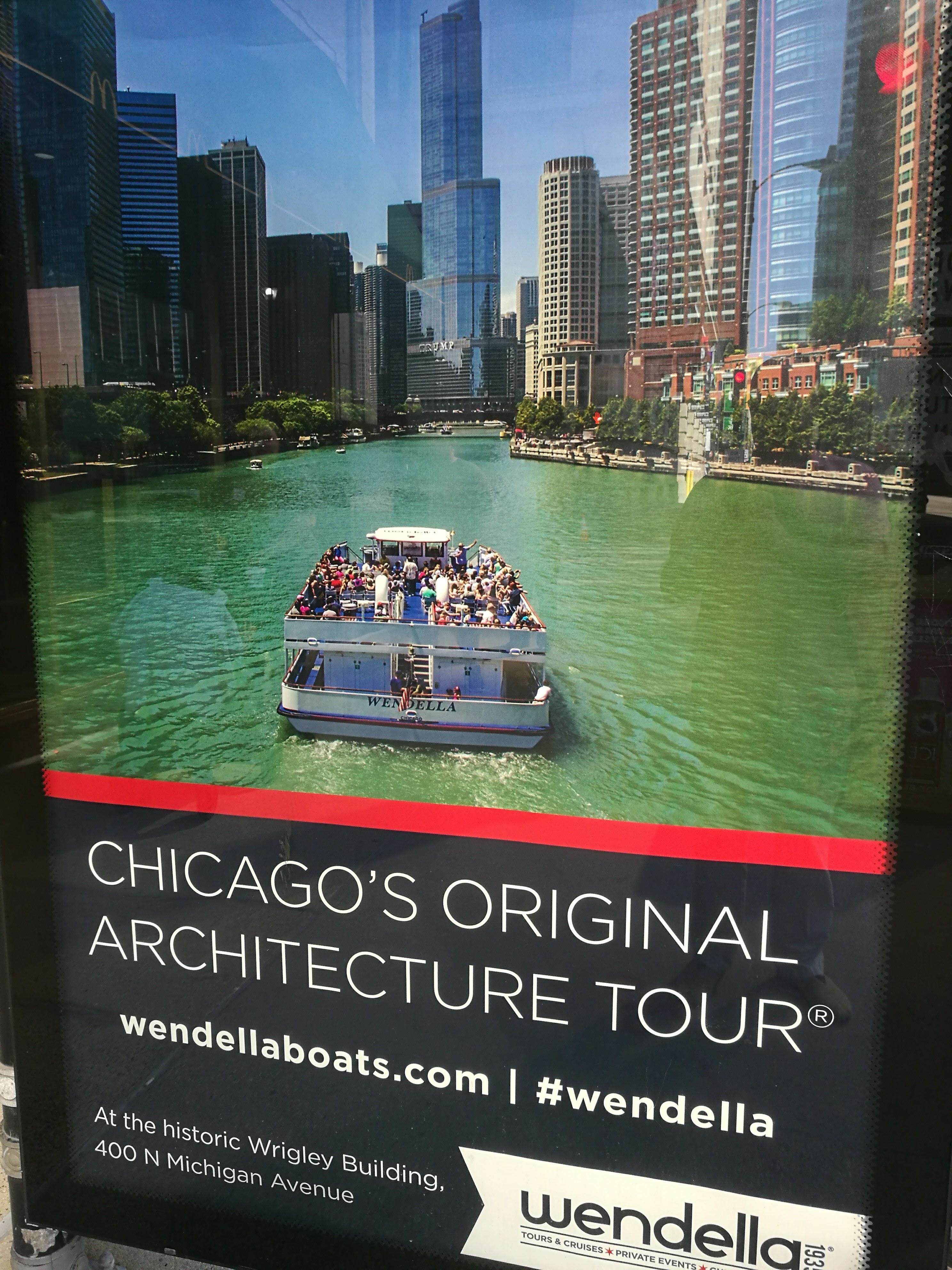 We spent the morning on a Wendella boat tour highlighting Chicago’s incredible architecture and marvelled at not only the scale, but the huge diversity of architectural styles that have made this city probably the most impressive skyline in the world.  Skirting the river in every direction there are behemoths of all sizes and shapes, from the absolutely huge ‘Merchandise Mart’ building, occupying an entire postcode to the apparently limitless vertical expanses of the Willis Tower and Trump Tower.  We learned a lot and enjoyed it at the same time. 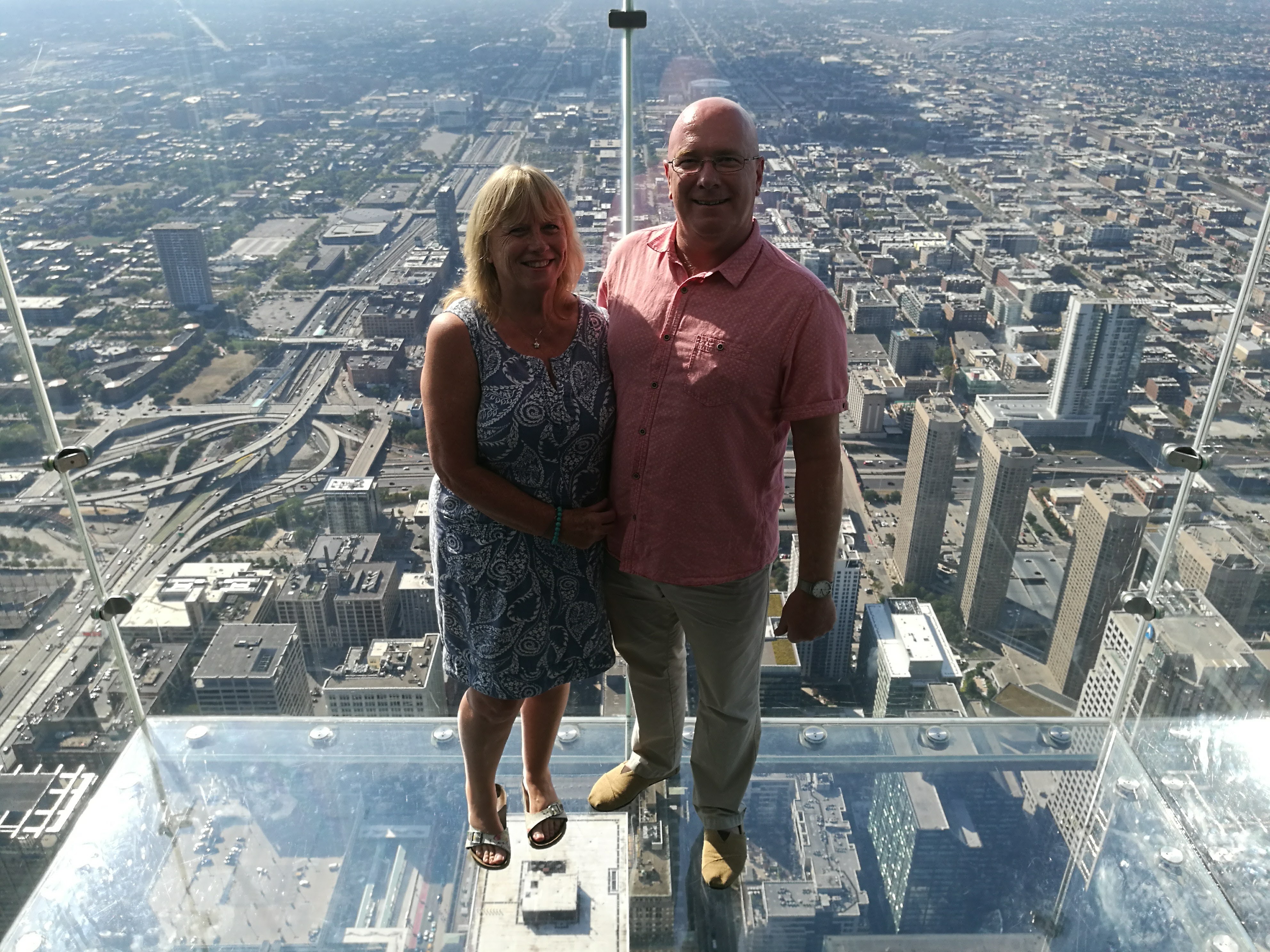 To see all the same sights from above we went up to the ‘Skydeck’ at the top of the Willis Tower with a view to standing on ‘The Ledge’, a glass box built out of the side of the building more than 1100 feet above the streets below.  I remember watching a documentary detailing Billy Connolly’s Route 66 adventure and laughing at his reaction to stepping out onto that glass floor.  Priceless!  Mrs C, however, also provided some entertainment to the other visitors, raising a big round of applause when she eventually summoned the courage to step out. 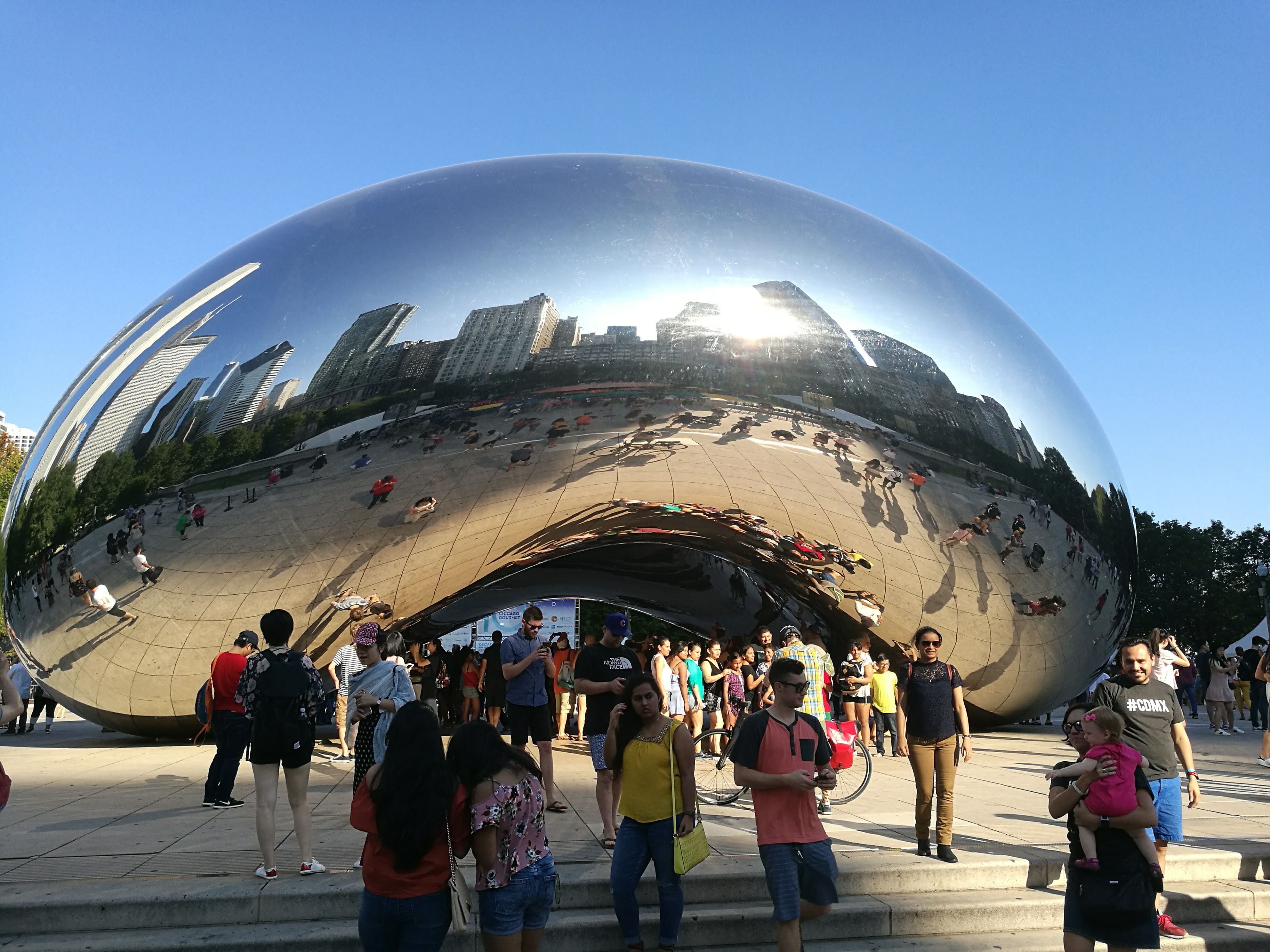 No visit to Chicago would be complete without a visit to Grant Park and the famous ‘Bean’ sculpture.  We walked round and around, taking photos from all angles, getting reflections and distortions from all directions.  No wonder it’s one of the most photographed attractions in the city.

Monday was our departure day and the official start of our Route 66 adventure, so starting at the intersection between Michigan Avenue and East Adams Street, we took a photo of the famous ‘Begin Route 66’ sign and headed west.  LA, here we come!

For information on the hotel above or indeed any of the hotels we’ve mentioned in our blog go to www.expedia.com .