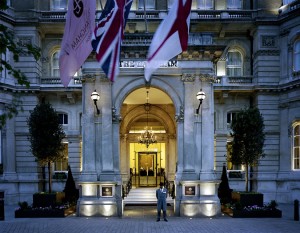 We went to London a couple of weekends back for a night at The Langham Hotel. One night wasn’t really enough but sadly it was all we could afford: as we were in London for Saturday and Sunday and it was a 5 Star Hotel, I think that still comes into the category of luxury weekend breaks though even if we only officially slept there for one night!!

The Langham is in the West End just off Oxford Circus so smack bang in the centre of all the ‘action’ if that is what you want. We just wanted peace and quiet and we certainly got that in the tranquil Langham. 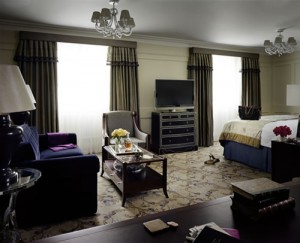 From the minute we walked through the grand entrance, checked in and weregreeted by name and taken personally up to our rooms, we felt spoilt and very special. Our  luxurious room was stunning and the bed was absolutely massive with pillows and cushions galore! To be honest I’d have been happy to stay in the room and just snuggle-up in the pillowy goose-down duvet with a good book and a glass of something sparkling, but it would have been a shame not to explore. 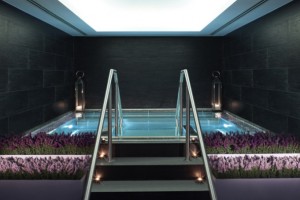 We had booked ourselves into to The Chuan Spa and after walking through a series of maze-like corridors and going down several levels, we eventually found it and were amazed at the size of the place. Remember this is the centre of London where space is at a premium. We had a lovely swim, tried out the Jacuzzi and sauna and generally ‘relaxed’. The changing rooms were lovely and clean, dressing gowns and towels were in abundant supply and the staff couldn’t do enough for us. The relaxation area was stocked with loads of healthy refreshments and magazines  – in a nutshell The Spa was pretty much faultless. 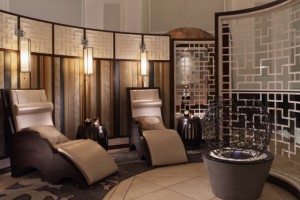 I’d booked in for a treatment called  the ‘Oskia Signature Glow Facial’ and I loved how soft and hydrated the skin on my face felt afterwards. It was wonderfully relaxing being on a waterbed for the facial and as expected I fell asleep. Surely that’s got to be a testament to how good the facialist was!  I’m not entirely sure my face looked younger after the various anti-ageing lotions and potions were massaged-in, but I certainly felt better for the whole hour and a half of pampering.

Most of our evening at The Langham was spent  in the sophisticated and very ‘cool’ Artesian cocktail bar aka the ‘best cocktail bar in the world’.  There’s a 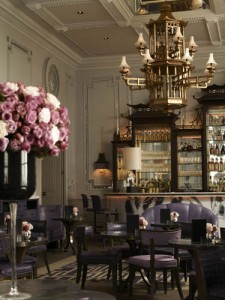 lovely informal atmosphere there and the staff seem to know what you want before you even seem to know yourself.  We had a couple of cocktails each and boy were they potent!  Mr. C had something called an Artesian Punch and I had a pretty Pink & Gold to accompany the delicious ‘nibbles’. It must have been a good evening as try as I may, I can’t remember the names of the other cocktails imbibed.

It would have been the cherry on the icing on the cake if we could have secured a table at Michel Roux Jr’s ‘Roux at the Langham’ but it was fully-booked. Never mind there’s always a ‘next time’…….

We only spent 24 hours in The Langham but what a 24 hours it was. We left feeling happy, pampered, spoilt, full and very, very refreshed. A perfect break you could say!

For those who need to know, we parked at the brand new Q-Park in Oxford Street – a really safe and secure car park with entry and exit only for those with a parking ticket. I loved that they offer free umbrella hire for if you’ve forgotten your brolly and the weather takes an unexpected turn for the worse.