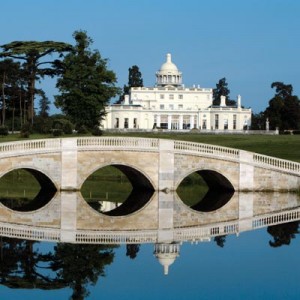 We have just celebrated Mr. C’s very ‘special’ birthday in true style at the majestic and truly magnificent Stoke Park.

Stoke Park is a grand hotel in every respect and I don’t think I could sing their prases enough to be honest.

From the minute we pulled up at the door of the old Mansion until we checked out a couple of days later, we were relaxed and our every need was catered for. I’d go as far as to say that our ‘needs’ were often anticipated by the brilliant staff before we even knew we had the need! Stoke Park is a luxury hotel in every sense of the word and the staff there make their guests feel like the most special people they have ever welcomed.

We had a room in the new Pavilion building, a short walk from the original old Mansion house. Our room was an Executive Double and I loved it. The room wasn’t quite as big as some of the 5 Star hotels we’ve been to but it certainly had everything we needed plus a lot more. We walked into the room to find a lovely basket of fruit and some hand-m

ade chocolates. These were ‘tested’ straightaway and declared to be so scrummy I just had to keep on ‘testing’ them! The bed was enormous and  deliciously comfortable. We both slept like the proverbial logs on both nights. The bathroom was a brilliant size with a lovely bath (big enough for both of us),  a roomy rainfall shower and plenty of luxury pampering products. Our room even had a comfy sofa where we could sit and watch the massive TV and continue eating the yummy chocs or look out of the window at the picturesque view.

We had breakfast in the really informal San Marco the first morning and Humphrey’s on the second morning. On both occasions, the food was spot-on. Breakfast is served till a very civilised 11am and coffee was brought to the table with hot milk (yay!) straightaway. (I hate having to wait ages for coffee when I go down to breakfast in hotels so Stoke Park gets lots of Brownie Points on the breakfast score!) When I went over to the buffet area there weren’t any croissants left so I asked one of the super-efficient staff members if they had any. Immediately I was asked if I wanted plain, chocolate or almond and the breakfast chef then proceeded to make me my very own mouthwateringly good almond croissant from scratch. I was well impressed! It was one of the best almond croissants I’ve ever tasted (although Lainston House and Pret a Manger are pretty good too!)! The Birthday Boy had Eggs Benedict both mornings and was full of praise. Having more of a sweet tooth than him, I opted for the freshly-made Waffles with Maple Syrup on one of the mornings and asked for some bacon to go with them – so, s 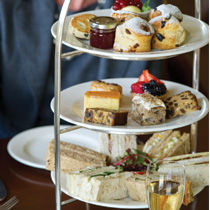 Champagne Afternoon Tea was a real highlight for us. The scones were to die for and the view over the grounds made me feel like I was in some kind of Jane Austen novel. Dinner in Humphrey’s Fine Dining Restaurant was the sort of treat you’d expect from a restaurant with two AA Rosettes. The staff were marginally over-attentive but not in an annoying way and anyway when the food’s as good as this, who cares really?!

Walking through the immaculate grounds, it is clear why Stoke Park pops up in so many films. Bridget Jones and a couple of James Bonds to name but a few…. I don’t play golf and frankly don’t see the attraction but Mr. C declared himself to be impressed with the Championship golf course. Personally I don’t feel the need for too much activity on a weekend break and I much preferred ‘chillaxing’ with a book in The Atrium in The Spa. Amy in The Spa gave me a ‘tailor-made’ Thalgo facial which made me nod off almost instantly – always a good sign when it comes to spa treatments. If I had one criticism of the Spa areas though, it would be that the temperature was a tad too high. I know we’re all walking around in dressing gowns but still…..

I would say that we had a pretty much perfect weekend in Stoke Park and as we’re already saving for another visit, I think you can draw your own conclusions.

4 thoughts on “A Luxury Weekend Break in Stoke Park”