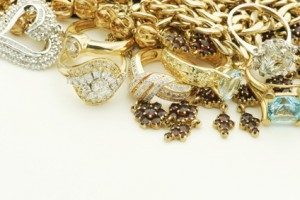 Over the years my 3 daughters and I have amassed a fair amount of jewellery, knick-knacks, trinkets and yes, some tat.  All of this stuff needs putting somewhere and we all have lots of modern and antique jewellery boxes and trinket boxes of varying designs and sizes, scattered in our bedrooms.  And all the boxes are filled with jewellery (both junk and ‘proper’ for want of a better word). 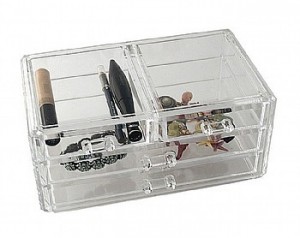 came home from Uni with a whole room-full of her Portsmouth life which needed storing until next Term. She can’t keep the things in her own room as it’s too small so I thought I’d make room elsewhere in the house by tidying-up, throwing loads out and donating bagfuls to charity. Whilst doing this, I took a good look at my ‘jewellery’ situation and decided to do a good sort-out.

Decluttering is something I have to do fairly regularly to keep sane as otherwise my house would be like that of one of those people from a Channel 5 documentary. 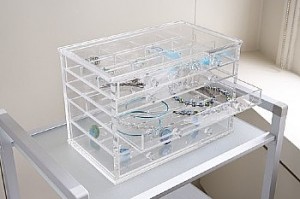 You know, those people who, for whatever reason, simply can’t bear to throw anything away.

Well I was pretty brutal in my decluttering day. Necklaces bought in a NEXT Sale and never worn went in the charity bag along with many a ‘holiday bangle’. T-shirts which have been too small for a long time but kept in anticipation of the ‘day that never comes’ when I might fit into them again? Yup, charity bag for them too! 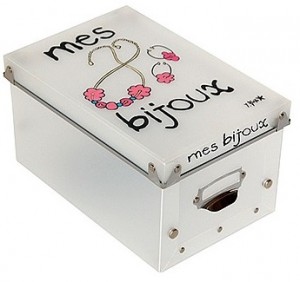 I’ve still kept a few of my treasured trinket boxes but the bulk of my jewellery is now in my new jewellery boxes from The Holding Company . They’re see-through which means a lot less faffing around looking for particular items and nice and contemporary-looking too. I even picked up a couple of their cheap and cheerful Bijoux Boxes for the less-special trinkets I simply couldn’t bear to throw away – memories of Mothers’ Days gone-by!