It’s funny how experience helps understanding. The last few weeks have taught me a couple of things: mainly that I’m definitely not getting any younger and that I can now relate with total sympathy to those who are teased for over-egging the pudding when it comes to describing the problem of passing a kidney stone.

In the run up to Christmas it’s always nice to look forward to a few days off, the cosiness of a warm house and a certain amount of 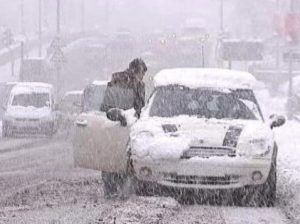 over-indulgence to get you through. Christmas on this occasion proved to be anything but as expected.

Firstly, the weather! The Ooohing and Cooing of ‘snow’ from the female contingent heralded the arrival of the first signs of the ‘big freeze’ that ground the country to a halt and cost the economy billions of pounds. It also thrust a nice dose of Flu my way, rendering me the best part of useless for a week. I finally managed to get up and about, although at nowhere near 100%, by the 23rd.

A very pleasant, if subdued, few days followed, culminating in a New Year’s Eve visit to the in-laws. Something wasn’t right from the start of the day. A sensation I had been putting down to wind or similar was ever present and ever increasing. We all sat around the table for lunch and I put on my bravest of smiles and pretended everything was OK still. However there are always limits for everything and the point at which I could sit still was soon passed. I made my excuses and left the room to do something. I didn’t know what exactly, but something! Pacing from room to room, sit down, stand up, visit toilet, leave toilet, lie on settee, stand up, sit down, get glass of water, sit down, stand up, walk to toilet, and so it went on.

By this stage I had no idea what to do. The pain had taken hold and obviously had no intention of letting go for some time. Even breathing normally, let alone conversation, had become almost impossible, as had the ability to concentrate on something as difficult and complicated as smiling! Such torture left me with no choice but to recruit Mrs C to abandon the social festivities and take me somewhere. I didn’t know where because the power of rational thought had long since been taken away, so anywhere was fine. Luckily, she decided that a doctor might help me decide, so we went to see our GP, who was still there until mid-afternoon.

“Gall bladder” was the consensus. Take some of these pain killers and come back if things get worse. Two hours later, and with beads of sweat now running down me, we contacted the local hospital’s out-of-hours service for a second opinion. “Gall Bladder” said the lovely doctor. If you want we can ask the surgeons to take a look at you to confirm. By this stage any offer of help was more than welcome, so I agreed and was led around a labyrinth of corridors to the Surgical Assessment unit to be assessed. “Gall Bladder” declared the Junior doctor who examined me. Take some stronger pain killers and we’ll start you on some antibiotics straight away. At this point he explained that it was probably in my best interest to stay at the hospital while they fed me with antibiotics intravenously. He also wanted a senior doctor to authorise a bed for the night. In the meantime, I was sent to X-Ray so they could try to see what was going on inside.

So I sat and waited for a while and though there had been a slight reduction in the pain, it started coming back with a vengeance just before midnight. Just as the chimes were about to sound and the prematurely-lit fireworks were crackling away outside the senior doctor arrived and said… guess what!

No, not Gall Bladder! Renal colic resulting from passing a kidney stone. Ah! This was beginning to make sense now. So I was despatched to a ward where a chorus of others snoring, farting and sleep-induced mutterings helped take my mind off the pain that was still doing its best to drive me insane.

scan the following morning, a charming Urology man came to tell me the real ins and outs. “You have a stone measuring approximately 6mm in diameter that has passed from your kidney into your ureter”. This is apparently quite large and right on the threshold at which they consider intervening to help it pass. However he seemed confident that nature would take its course and this basketball of a crystalline structure would defy all the laws of physics and find its own way out in time.

What it boils down to though is my complete admiration for the National Health Service and the way they dealt with the situation. OK, the initial diagnoses were a bit off the mark, but it was obvious that something wasn’t right and they made sure they found out what it was quickly, efficiently, and considering this was on one of the hospital’s busiest nights of the year in a very thorough and professional way.

I was released the following day with a sackful of painkillers and relaxants and with details of instructions and the necessary follow-up routine. I hasten to add that the stone is still there, on its way down, pushing hot skewers into my flesh as it progresses, but I am reassured that whatever happens it will be alright. If it hasn’t popped out after a few weeks, the dreaded intervention will be actioned as promised.

Well done and Thumbs Up to the NHS at the University of Wales Hospital in Cardiff, I say! 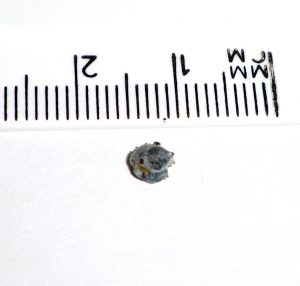 te:
On a dark Saturday evening, while sitting in an armchair and shouting at the TV screen for something or other, there was a ‘popping’ sensation down below.  What on earth??? Half an hour later, when visiting the loo, the cause became apparent when this little critter emerged!  Angry little devil, isn’t he!  Never mind, I’ve taken out my revenge by getting him sent off to a lab for analysis.  That’ll teach him to go around spoiling people’s Christmas holidays!