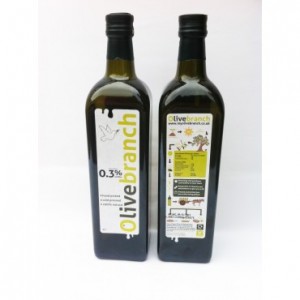 Turns out there’s olive oil and then there’s OLIVE OIL – and Olive Branch do the latter version. Although I’ve been using olive oil for years, I don’t think I realised until recently how delicious a really good olive oil can be.

Olive Branch’s olive oil comes straight from the olive groves of Crete and as the people of Crete have one of the highest life expectancies in the world, then they are obviously eating lots of the right things & I think it’s safe to assume that olive oil is one of them! Olives are packed full of antioxidants so your free radicals will be banished with every mouthful.

The olive oil from Olive Branch is kind of peppery and citrussy at the same time and it tastes as good on its own as in cooking. Just dipping some nice fresh bread into it all on its own or with balsamic vinegar is really scrummy.

Apart from in cooking of course, olive oil has many other uses. After a Spring holiday in Sri Lanka, the skin on my legs went really dry. I had some reservations but thought I’d try a recommendation from a friend who suggested rubbing some olive oil on them. I did and it worked and No, it did not smell at all strange. Subsequently I’ve read about people who use it as a face moisturiser. Well I haven’t tried that yet but if I do, you’ll be the first to hear about it.