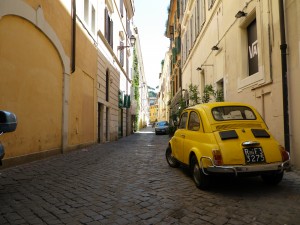 Years passed and various holidays became yet more bars on the global gate until a ‘special’ birthday gave us the opportunity to arrange a ‘special’ trip to see the city she had wished to see for so long.

There appears to be a rather common myth that Rome isn’t the easiest of places to get to – and to get around, but not only that, there’s also its reputation for petty crime and pickpocketing.  However, you have to understand that this is exactly what they are – myths!  Only two hours by plane from London, and a public transport system second to none, Rome is one of the easiest and most rewarding city breaks one could hope for. 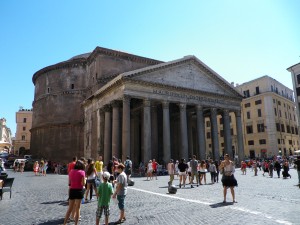 The first thing that strikes any visitor to Rome is the way that the old and the new blend almost seamlessly into one another.  Almost every street has a fascinating historical story to tell and, due to the fact that the city is so compact, you can see almost all its famous landmarks in one or two days without setting foot on a motor vehicle in the process.

Life as a tourist in Rome revolves around the next gelato / coffee shop / pizzeria that happens to be on your chosen route.  Pounding the cobbles can often take it out of the weaker ones amongst us but regular refreshment makes it all that more rewarding at the end of the Roman day.

We chose to stay at the Ripa Hotel in the popular and lively Trastevere are of the city.  A modern, contemporary hotel that’s within a short walking distance of the myriad of pizzerias, bars and cafés that litter the narrow winding streets around Santa Maria square.  It offers a clean, fresh and modern feel, with large well-fitted-out rooms and a big bright breakfast room where a tasty and well-presented buffet was available each morning. 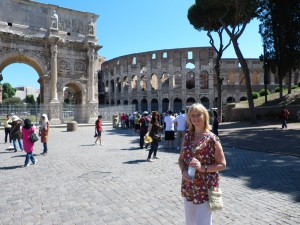 Our walking route took us on an anti-clockwise route around the city, starting at our hotel and then crossing the River Tiber before visiting the Circo Massimo,  Arco di Constantino, Colosseum, Colonna di Traiano, Museo Centrale del Risorgimento, Fontana di Trevi, Piazza di Sagna (Spanish Steps), The Pantheon, Piazza Navona and finally, after a walk along the delightful ‘Via Giulia’,  settling for some of the nicest cold beers we’ve ever sipped in our lives back in the Trastevere area.  All this took only a few hours, but some of the sights we took in we’ll remember for the rest of our lives.

On our second day we walked in the opposite direction up to the Vatican, where again the breathtaking proportions of St Peter’s Basilica impressed us so much.  We even ventured to the top of The Cupola – aka “the Dome” – where the views over the city are nothing short of amazing.  However, it must be said that being a part of such a magnificent scene has its drawbacks, as we were among the tens of thousands of others who all had the same idea. 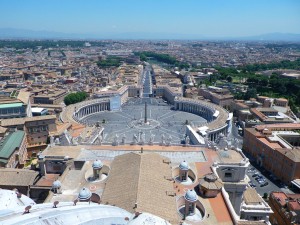 We would thoroughly recommend going prepared for some long, hot queues.  Take bottled water, a sun hat and wear comfortable rather than fashionable shoes and clothes.  You’ll thank us for this advice in time.

Getting around most parts of Rome needn’t be expensive.  Yes, there are taxis in abundance, but the public transport is frequent, cheap and easy, with buses and trams around the central area costing only €1.50 a shot and trains to and from the main airport at Fiumicino several times per hour for only €8.00.  The system is all so simple too.  Tickets can be bought at the numerous little newsagents and shops around the city.  They are then time-validated once you board.  Simple!

We ate at a few of the charming little restaurants around Trastevere but particularly liked the ‘Arco di San Calisto’, just off Piazza Santa Maria and the ‘Ponentino’, off the Via Della Lungaretta, for their simple, yet inexpensive, Italian fayre and wonderful atmosphere.

We deliberately left out a few attractions so that we have a definite excuse to return.  Mind you, who needs an excuse!  We look forward to the next ‘special’ birthday or celebration with great anticipation.  It was a truly memorable time in a truly memorable city.

British Airways did us proud on their Heathrow to Rome service too, with their usual unfussed, efficient organisation and efficiency!