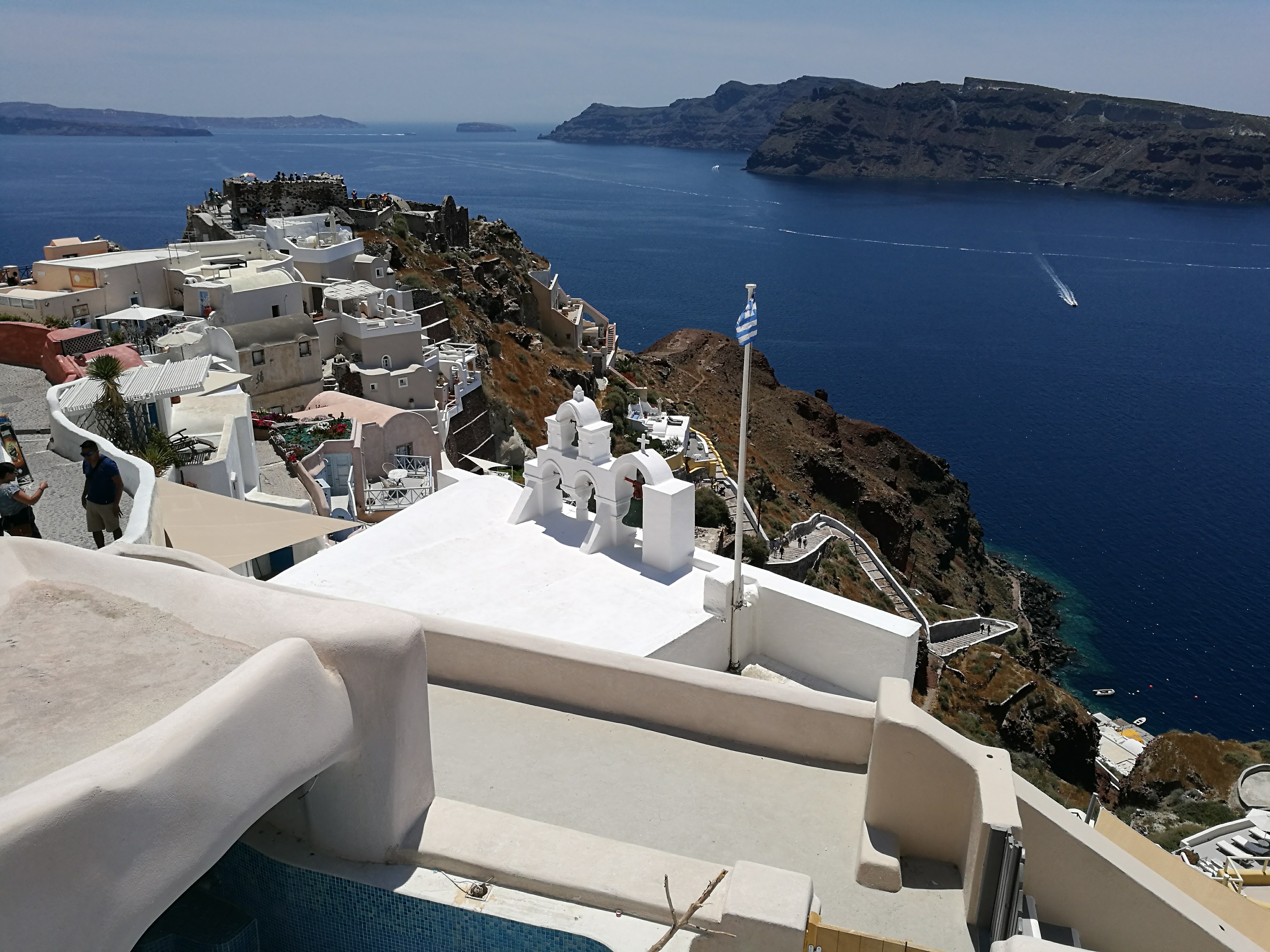 So, we were excited about our forthcoming visit, especially as the reason for the visit was to be there for our daughter’s wedding in Santorini.  It was also going to be as part of a much bigger trip that was going to take in Crete and Northern Italy. 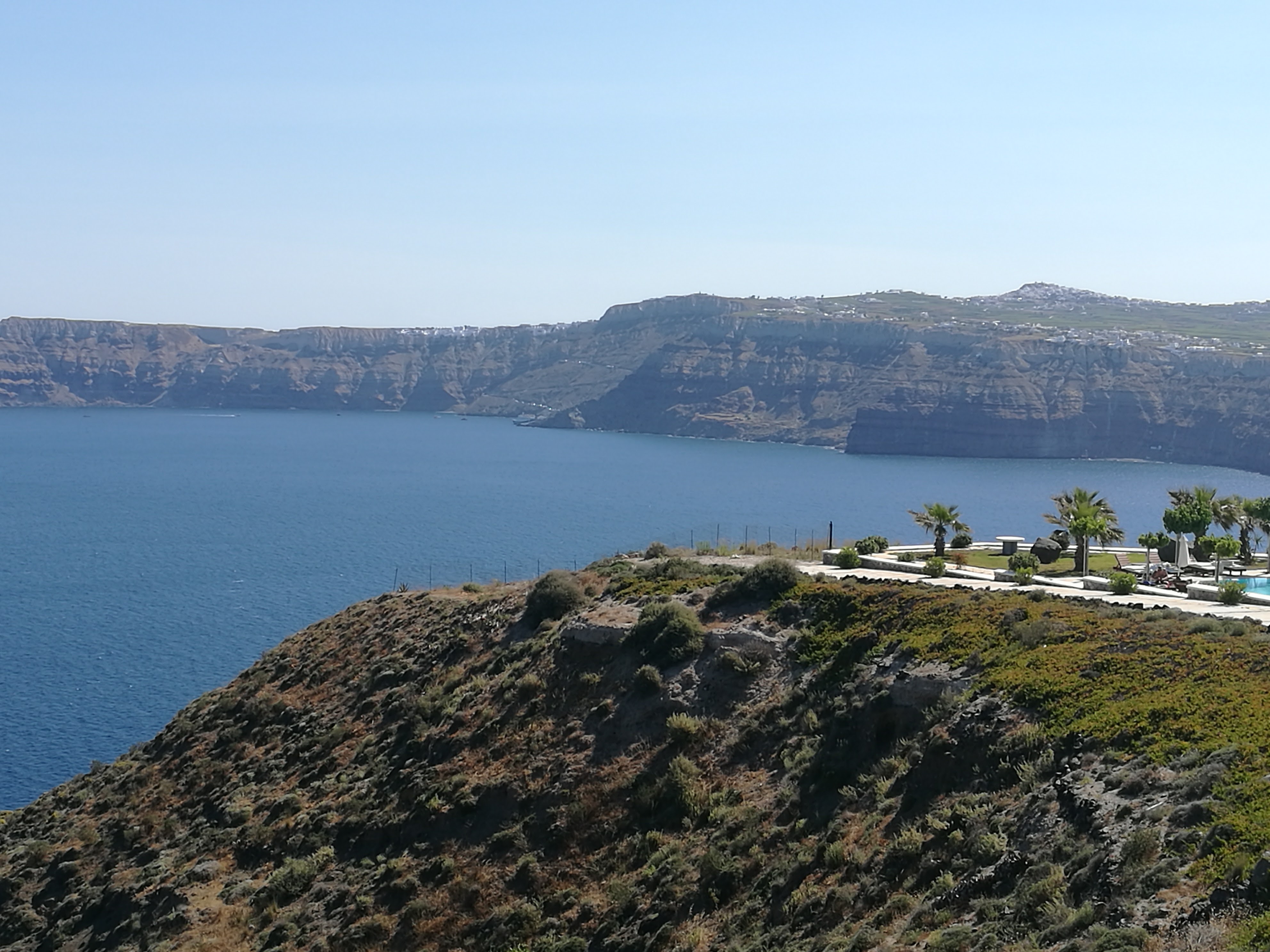 As our flight was scheduled for an early (06.30) departure from Gatwick and we had to travel from Cardiff, we decided that an overnighter at Gatwick was in order.  We got to the very nice Sofitel at around 5 pm and then did what any self-respecting couple en route to a much looked-forward-to holiday would do and popped down to the bar for a nice cold beer and a bite to eat.

No sooner had we sat down when the phones started bleeping.  Oh, for goodness’ sake, lets just mute them, we thought.  ‘EasyJet announcement’ was sprawled across the reminder bar. ‘Your flight to Santorini tomorrow has been cancelled – Rebook for free here’.  Eh?  No, can’t be, surely!  Due to industrial action by Greek Air Traffic Control tomorrow your flight has been cancelled.

Luckily the Sofitel is connected by bridge to Gatwick’s North Terminal, so we popped over to talk to EasyJet Customer Service, who were as confused as we were, especially as, by this point, one of our phones was showing ‘Cancelled’ and the other was showing ‘Delayed’.  Nonetheless, we were told to turn up in the morning at the supposed ‘delayed’ time in order to check in.

We did as we were told and managed to get away only 4 hours behind schedule and then landed in Santorini late afternoon. Sourcing a hire car for Santorini was dead easy and we were off exploring in no time at all! 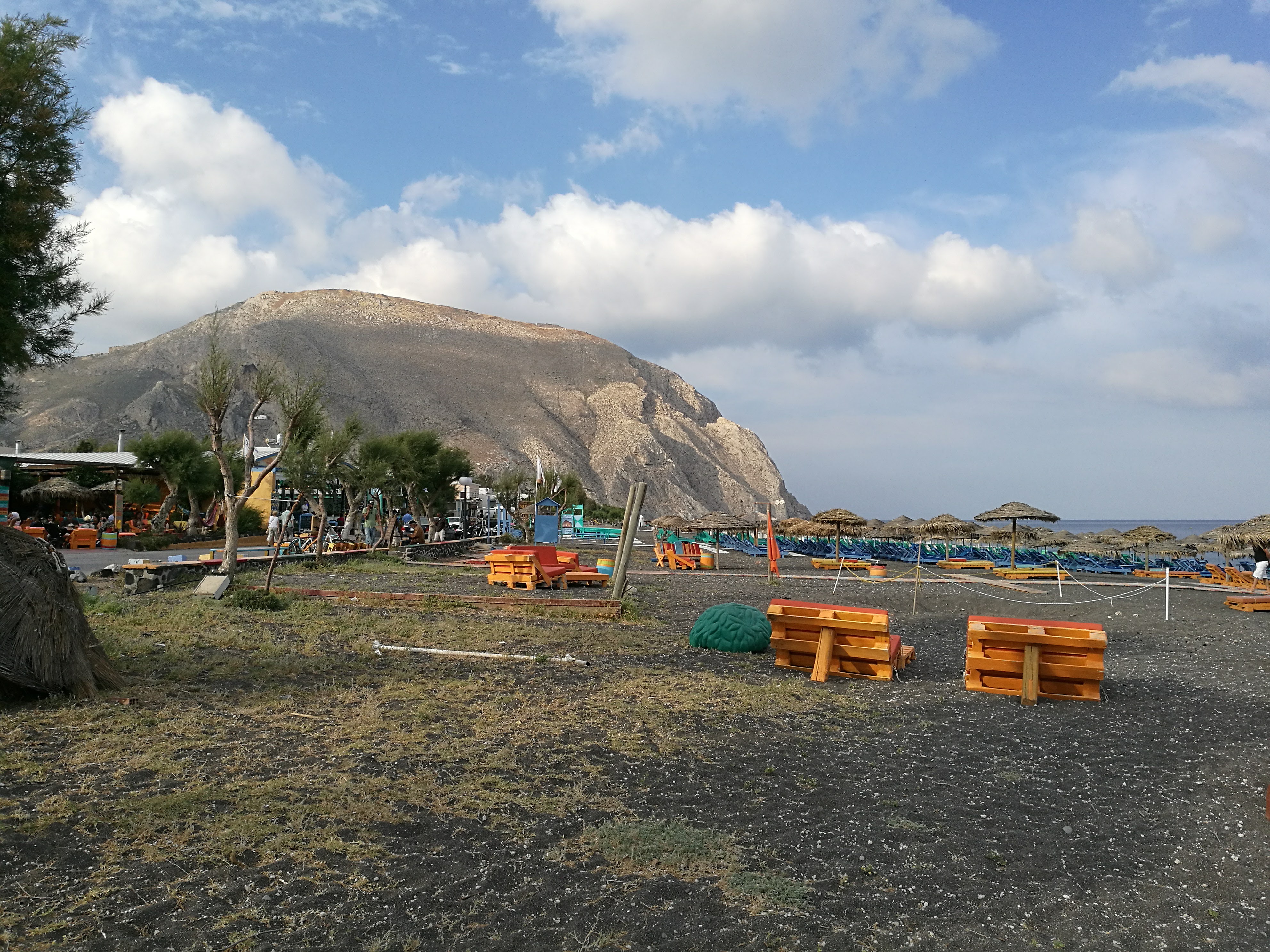 Santorini is an island of two halves: the impressive ‘caldera’ half and the less impressive, but in our opinion equally nice, southern half, with its black and red beaches, flatter landscape and quieter pace of life.  Our first few nights were spent in Perissa, a little beach resort on the southern tip of the island, with some pretty little streets, numerous bars and restaurants and a picturesque hilly backdrop with a white church perched halfway up.  It was relaxing and chilled, marred slightly by the cold wind that decided to plague us, but we had a lovely time, staying at the strangely named ‘Greek Goddess Spicy’ B&B, which turned out to be a little gem, nestled in the back streets, but within a short walking distance of the beach. 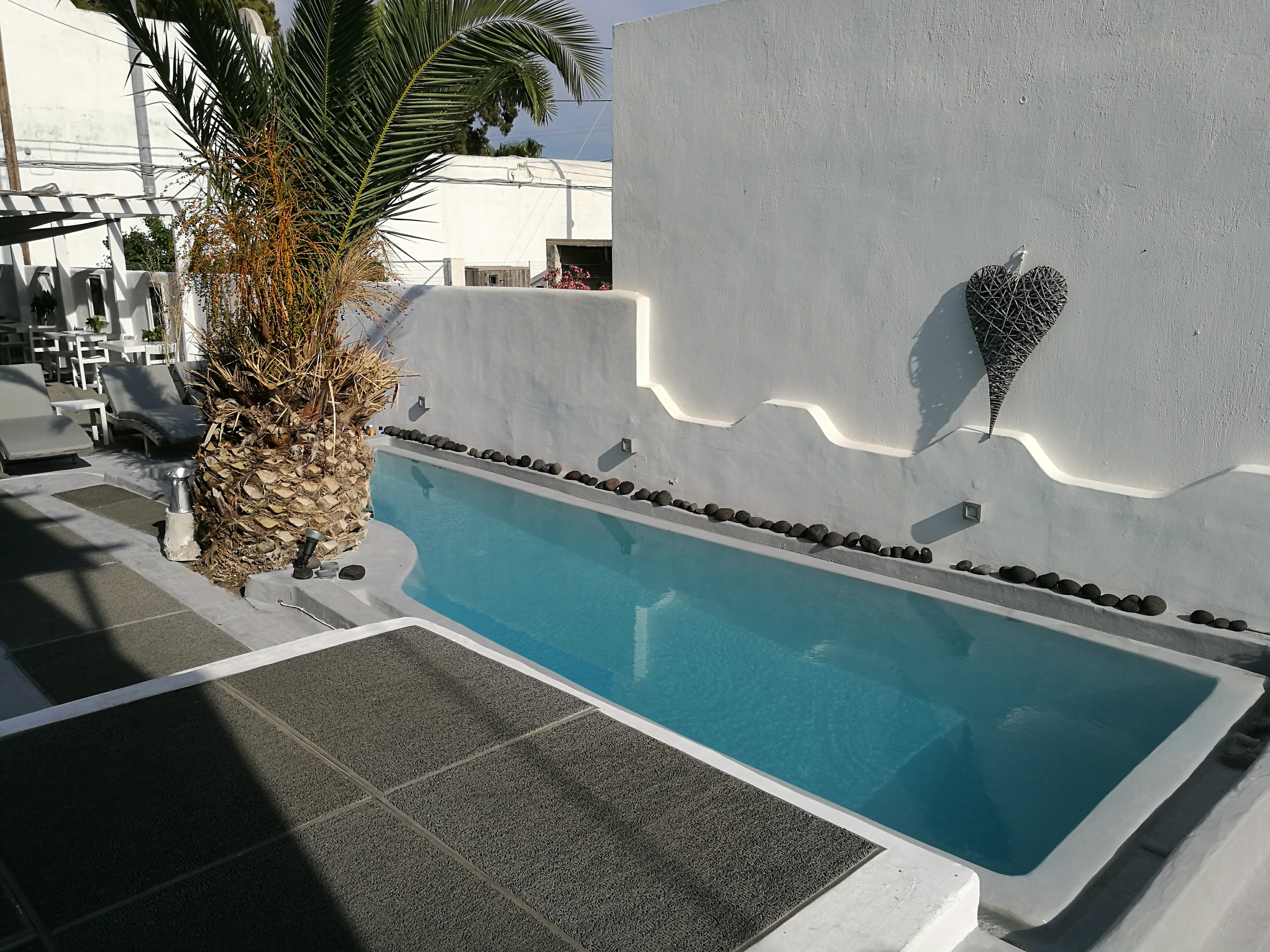 A few days later we hired a car and ventured up to our second point of call, the Afroessa Hotel in Imerovigli.  If prizes ever had to be given for stunning views, then this must surely be a gold medal winner.  Teetering on the highest point of the island it looked out over a deep blue sea and the precipitous hills that surround the bay.  Truly stunning scenery! 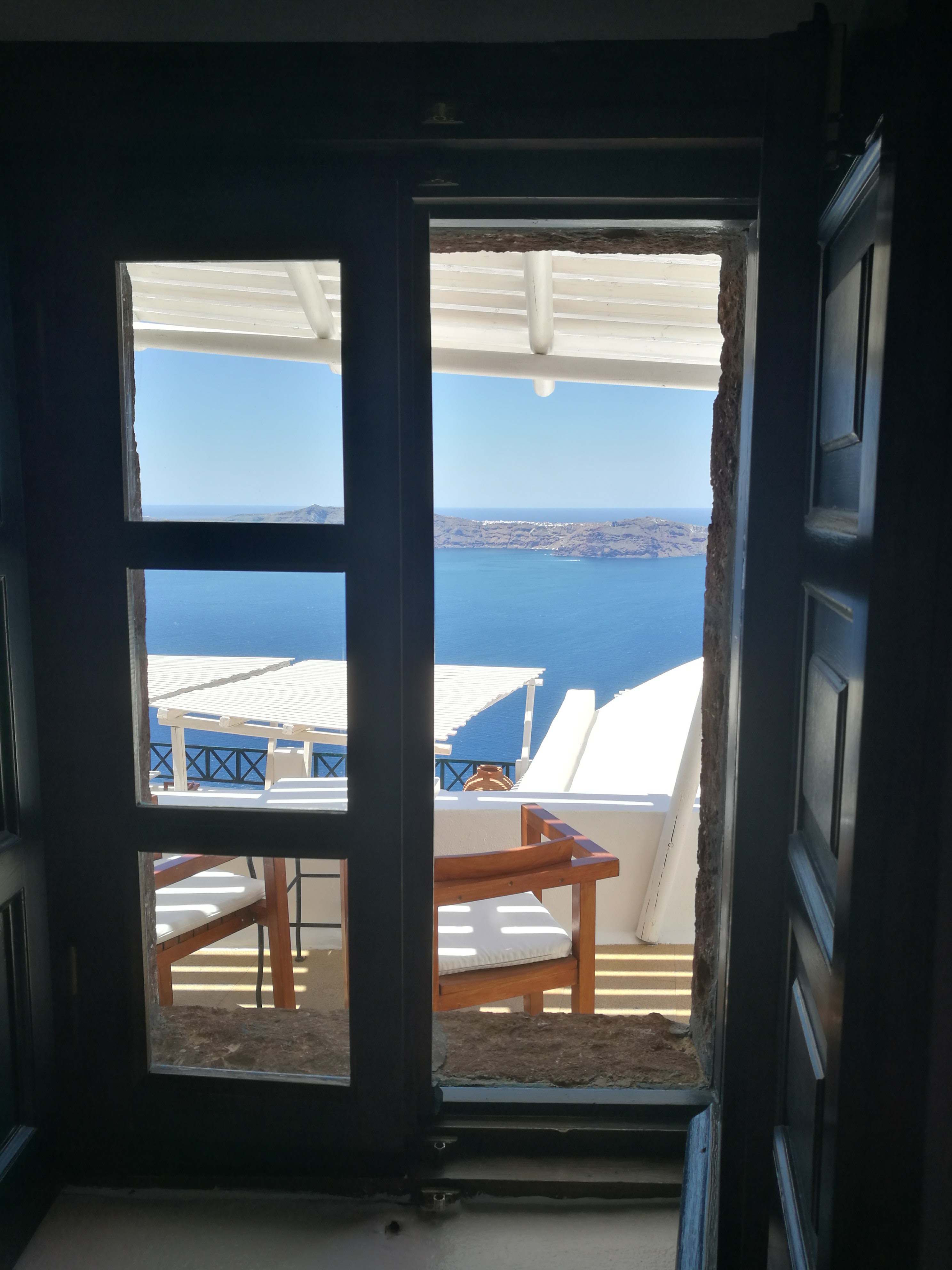 The Afroessa is a small, but lovely hotel.  Having only nine or ten rooms, it had a bar, restaurant and swimming pool, although despite our bravery was the coldest pool we’d been in for many years.  Bracing, to say the least. 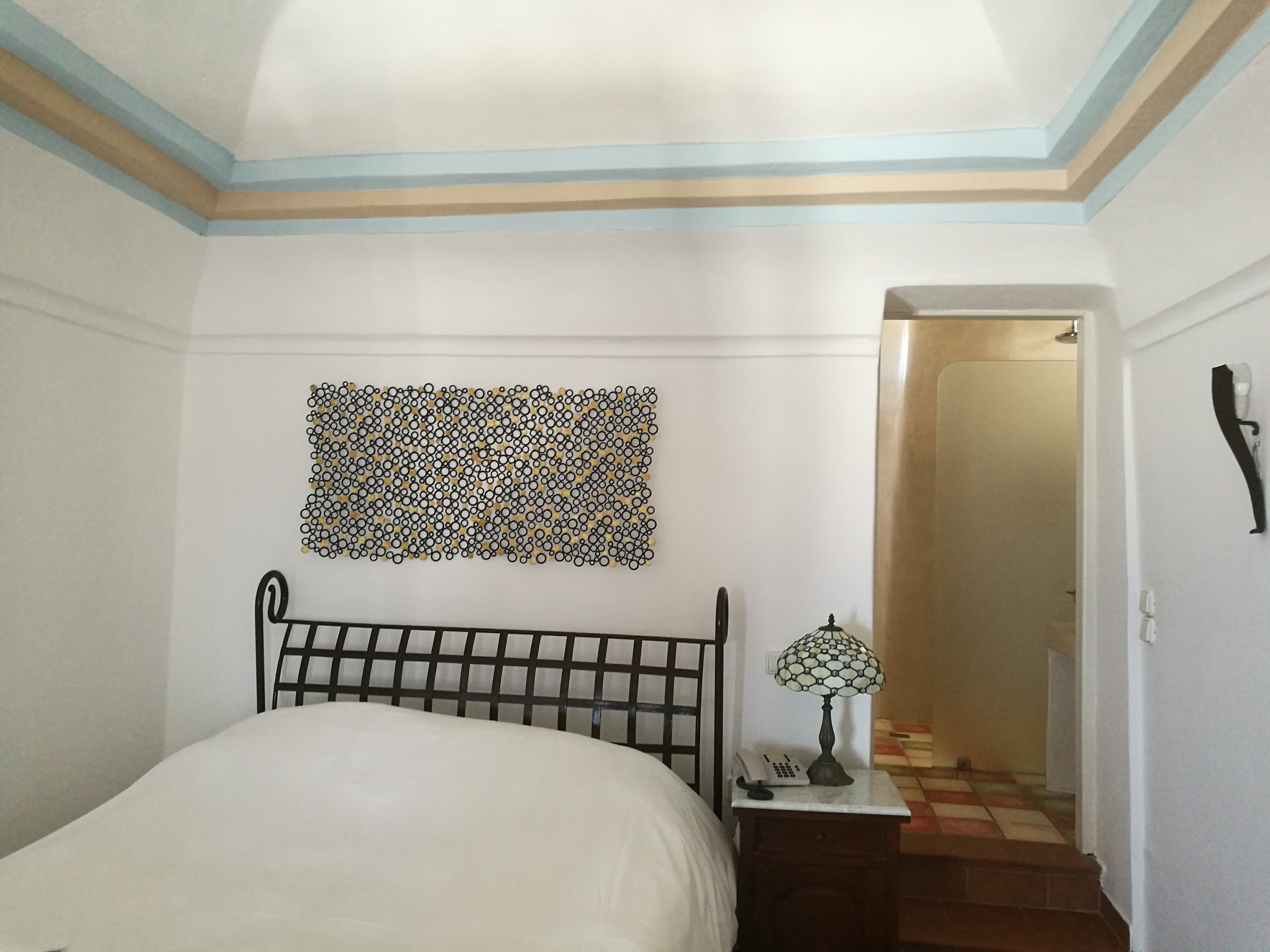 There’s a coastal path that runs along the caldera all the way from Oia in the North down to the southern side of Fira, the main town/city.  So the following morning we took a walk along the path, past lots of other hotels and more breathtaking views, into Fira.  It was a cloudy, windy, cold morning, and by the time we’d jostled our way through the throng of cruise tourists and selfie-stick storm troopers we arrived in what we found to be an expensive, unfriendly, over-commercialised and very crowded dump of a town centre.  It was hard to move around without tripping over souvenir stands, bumping into the myriad of cameras and smartphones trained on anything and everything that moved – or didn’t.  The cafes offering breakfast until 11, were kicking us away at 10.30 saying that they’d stopped serving breakfast, but they would kindly let us have a Cappuccino for a fiver each.  Pah, enough of that!  Back to our hotel, where we could sit in peace and quiet, get shelter from the cold, gale force winds and just sit and admire the view.

A subsequent visit to Fira, well away from the cable car area proved to be a lot nicer, with some charming little streets and interesting shops and cafes to be found. 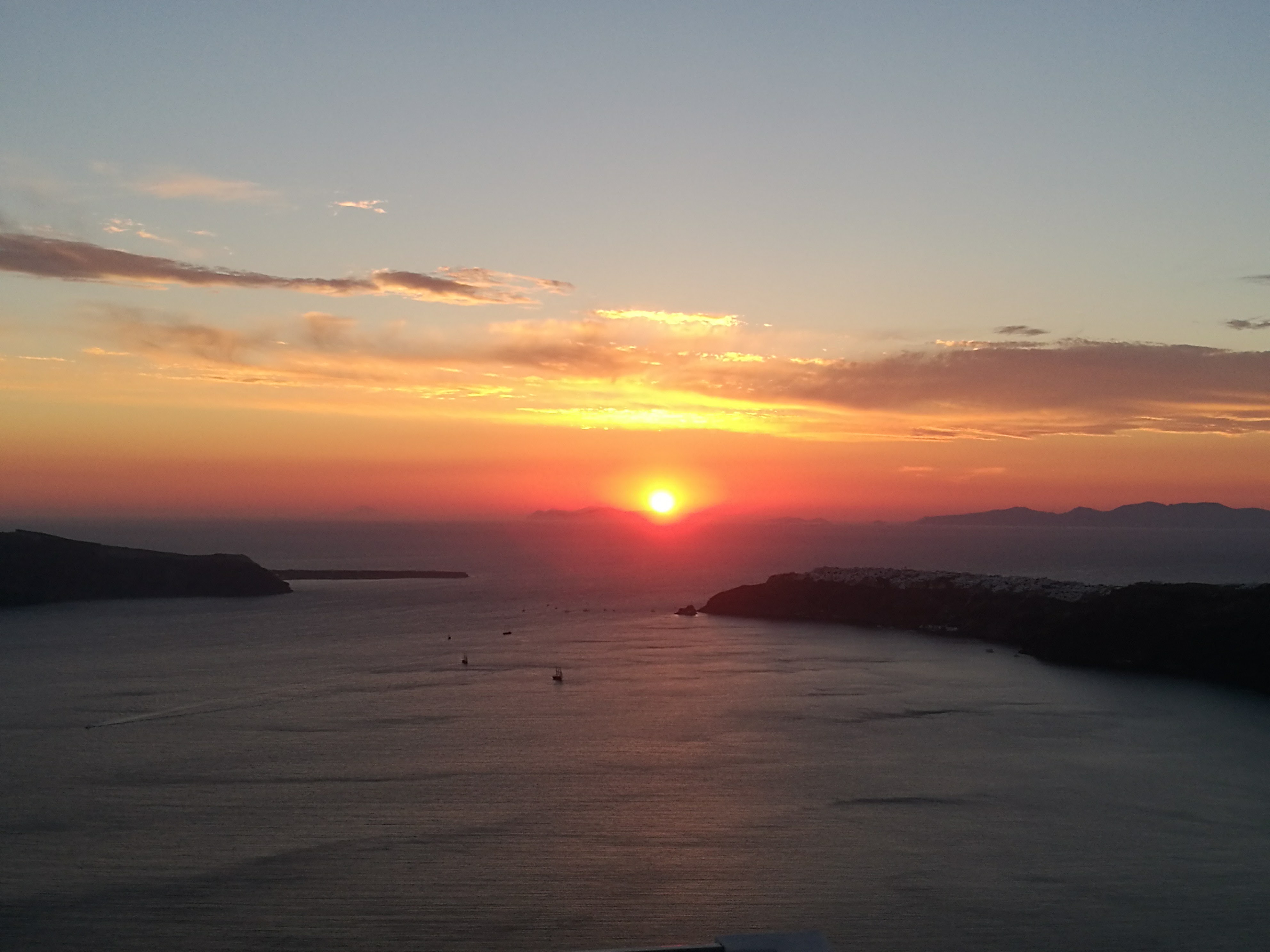 When the sun shines, Santorini is outstandingly beautiful and very impressive.  It’s well worth hiring a car or bike to get away from the very overcrowded touristy centres, although wherever you are on the island there’s an omnipresent fleet of cruise tour buses shepherding hundreds of camera-wielding visitors around.  The visitor centre down at Akrotiri is absolutely fascinating and well worth the visit.  We found some quiet corners and these were little havens of extreme beauty, as yet unspoiled by the crowds.  It’s such a shame, because the island is absolutely magnificent in what it can offer.  The trouble is, it’s offering it to too many people now we thought.  On some days you can see five or six huge cruise ships sitting in the bay, offloading tens of thousands of tourists onto what is essentially quite a small island.

PS: Read what Mrs. C has to say about our daughter’s wedding here