Auckland to Sydney, just three hours separates them but the difference between the two countries is apparent from the minute you land. New Zealand, stunning as it is, is quiet and chilled. If it was a colour, it would be muted tones and conservative in nature.  Sydney, Australia, on the other hand, though similarly relaxed, would be bright orange or pink, and loud, very loud! 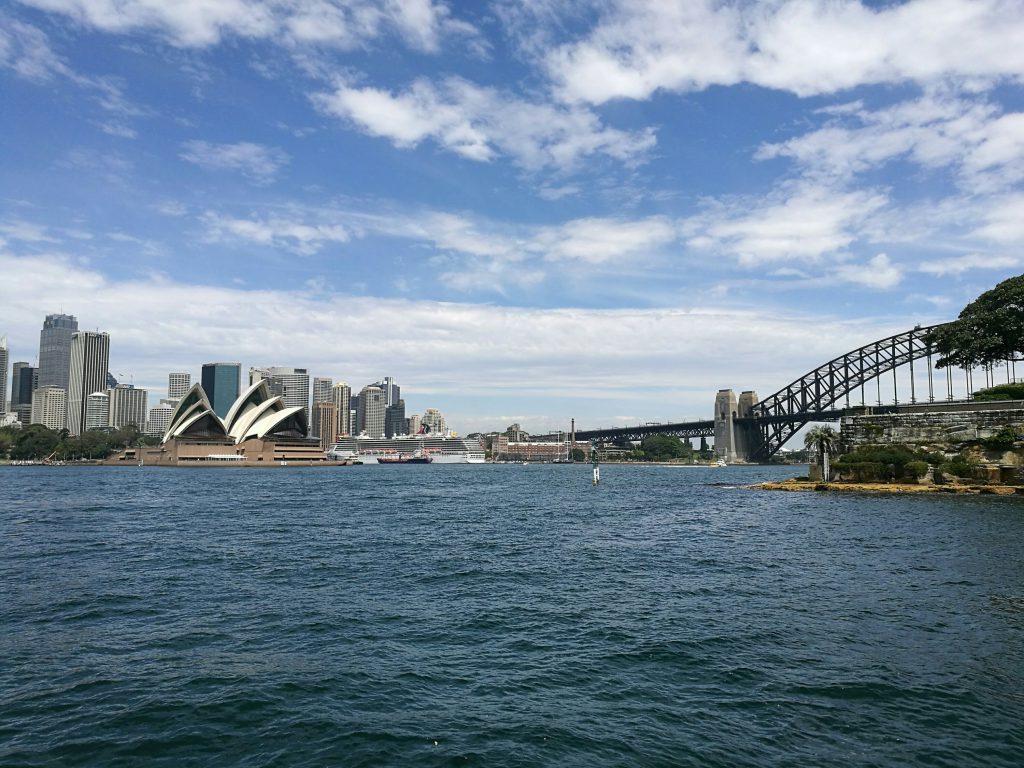 Sydney’s one of those places everyone raves about so it’s hard not to have high expectations. And we all know that the more you expect something to be great, the less likely it will be. Sod’s Law or Murphy’s Law, I’m never quite sure…… 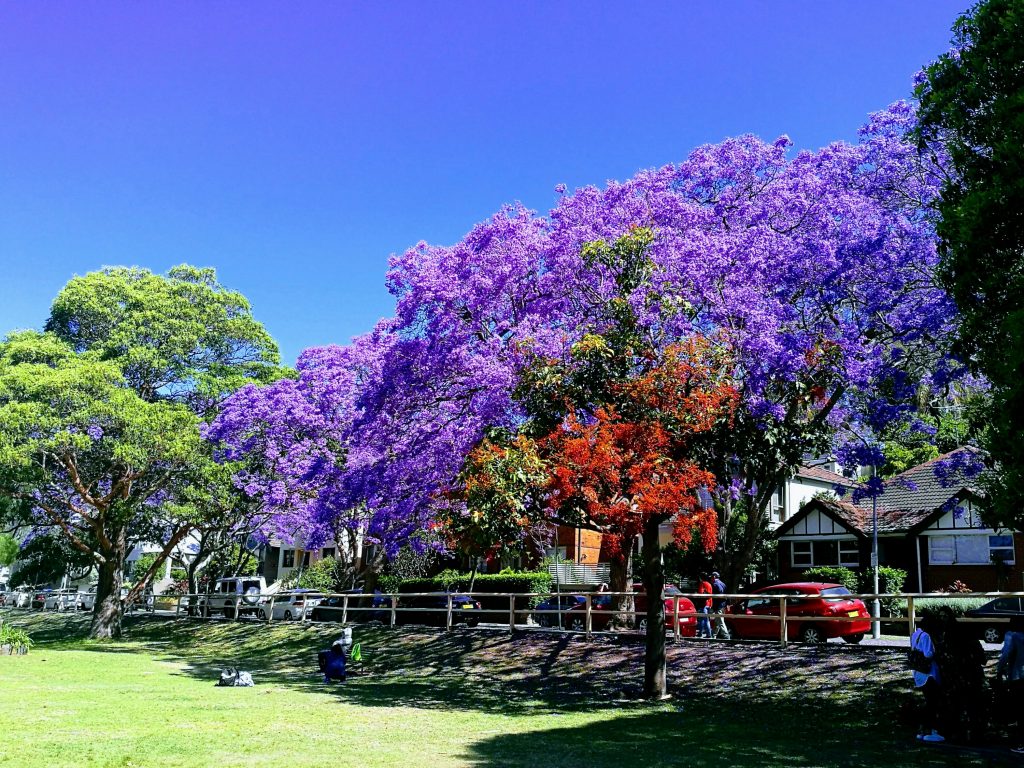 Anyway with expectations at an all-time high,  we started off by finding the little Airbnb we’d booked pretty much last-minute. Hotel prices are extortionate in Sydney and we couldn’t find anything affordable that looked like the sort of place we wanted to live in for 4 days. AirBnb have come up trumps for us a few times already this trip but this property really took the biscuit. A studio in North Sydney with views of The Harbour Bridge from its balcony. Unbelievable and only £50ish a night. We couldn’t believe our luck to be honest. The streets around us were filled with the most gorgeous lavender-coloured Jacaranda trees, which seemed to have become a tourist destination in themselves. An Instagrammer’s dream in fact. The number of people doing Selfies standing in the middle of the jacaranda-lined avenues was ridiculous really but they must have taken some beautiful shots! We got a few but no way were we going to queue for our turn to sit solitary in the middle of the road for the ultimate shot. 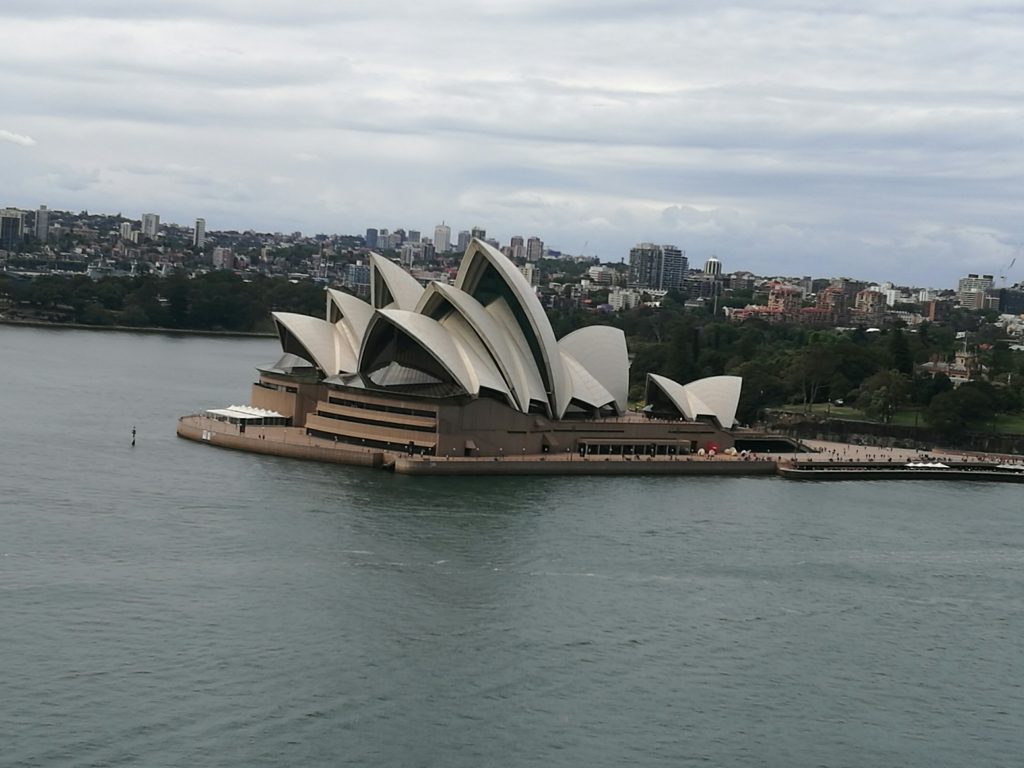 Walking over to Circular Quay the next morning took about 30 minutes over ‘the bridge’ . Yes it was a bit uphill to start but hey, the hill took you to one of the most famous bridges in the world so even in my post-pneumonic state I didn’t mind too much.  (We found out the next day when Mr. C did the famous Bridge Climb that Sydney Harbour Bridge is nearly 90 years old and what a feat of engineering for that era!) My first view of The Sydney Opera House from the bridge caught my breath a bit. I’d always imagined it but never thought I’d see it in the flesh. It was creamier-looking than I’d pictured in my head and if truth be told, a little smaller. There again it was a long way away!

On the subject of the bridge climb… over to Mr C…

I’d seen it, I’d driven over it, I’d sailed under it several times, I’d been over it in a train, I’d walked the length of it, but the one thing I hadn’t done yet was climb to the very top of it.  There’s no doubting that whichever way you look at it, Sydney Harbour Bridge is an amazing piece of engineering and its scale is breathtaking.  It’s only when you step out on to the metal framework beneath it that you really begin to appreciate just how big it really is.  Every car or truck that clunks over a bridge joint, every train that rumbles beneath the pylons booms and sends a vibration through the whole structure, amplifying and echoing between the steel girders. 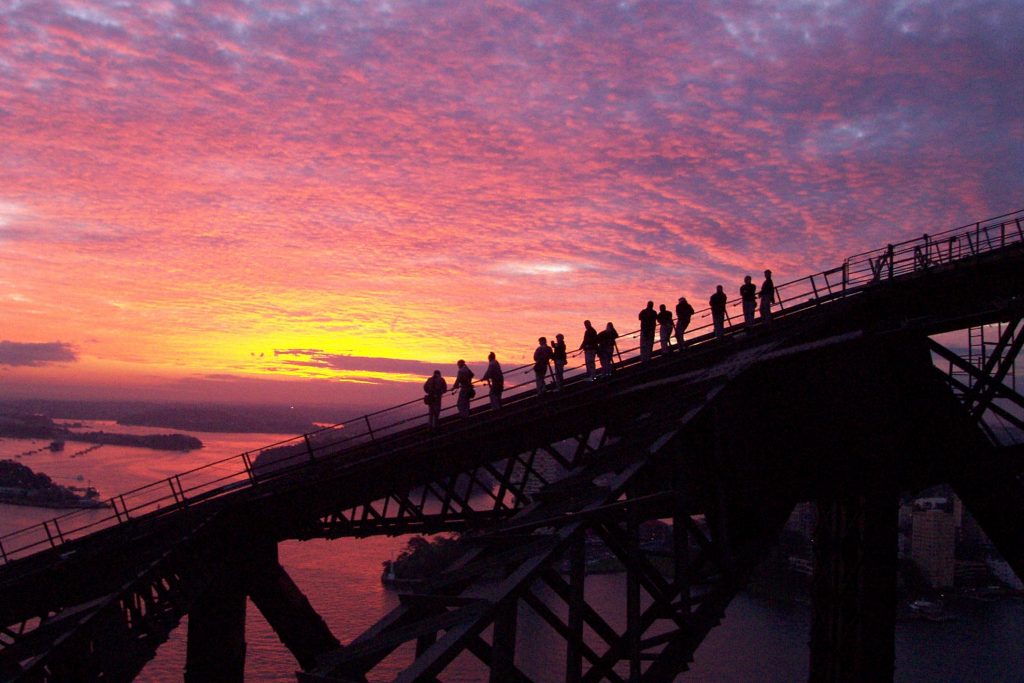 After a very comprehensive introductory briefing, which included health declarations and a compulsory breathalyser, we were all given our rather fetching boilersuits to don before getting all harnessed up ready for the big climb.  For obvious reasons, the last thing anyone wants is for something to be dropped from up there, causing injury or damage to anyone down below, so there’s a very strict procedure, including airport-style metal detectors, ensuring that nothing gets through that isn’t firmly attached to your harness.  Even my specs had to be tethered on to my boilersuit just in case. 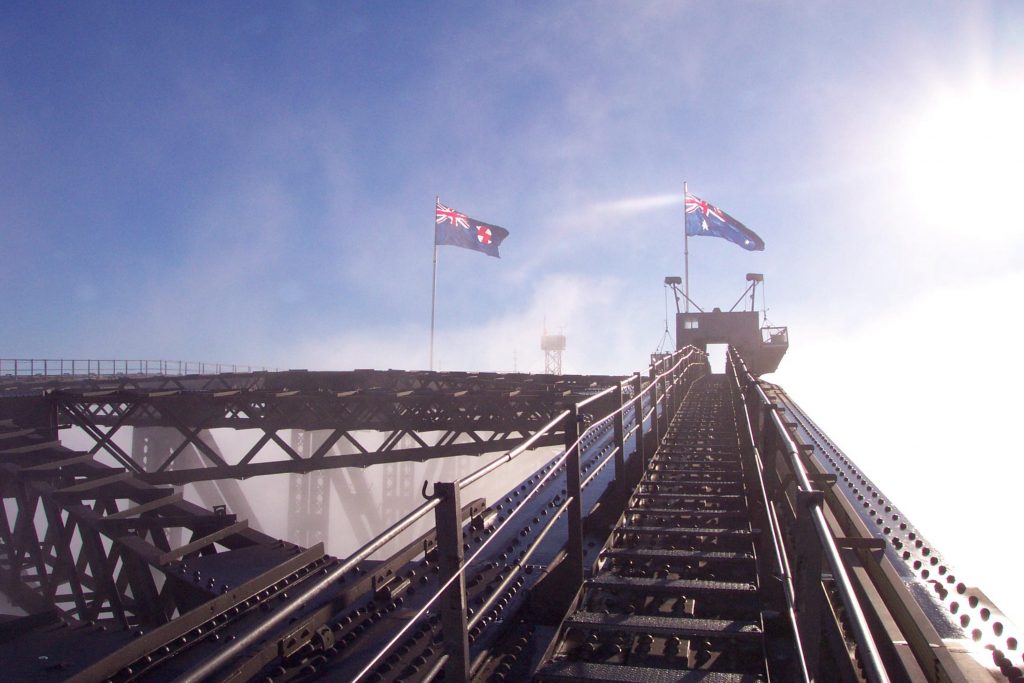 The first part of the climb involves following a walkway below the bridge out to the pylon and then onto a rather daunting series of steel ladders that take you up to the ‘shoulder’ of the coat hanger, as some of the locals affectionately refer to it as.  From this point you’re out in the open air right up on the top surface of the bridge, climbing slowly but surely up the hundreds of steps towards the flags and aero beacon at the top.  The sensation of turning around and looking down onto Circular Quay is spectacular and I can imagine that anyone with a fear of heights would find this point the most daunting because you get to really appreciate the true scale of the structure.  Not only do you have the enormous drop to the water below, but you also have the 8 lanes of rumbling traffic and two railway lines way down below you too.  Even on a relatively calm day, this is where the wind starts to whip around you too, making the whole experience seem even more precarious. 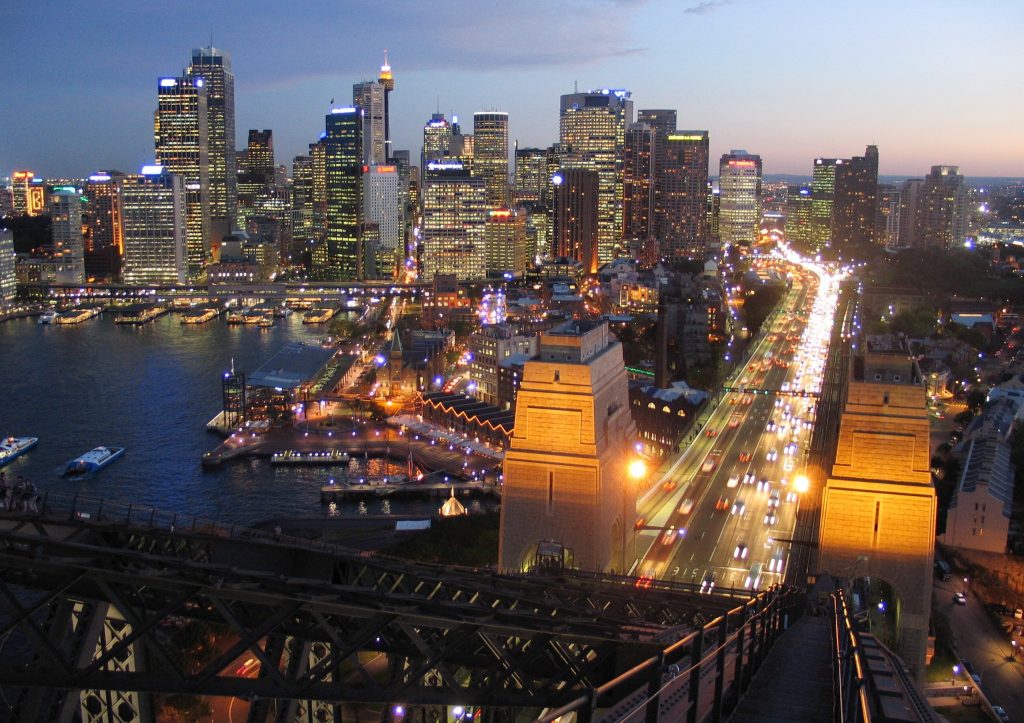 Reassuringly, the whole experience is done with safety being a top priority.  Those who pass through the initial vetting are secured to the bridge structure at every point by a ‘slider’, which connects each climber to the bridge frame throughout the climb.

Reaching the top, you get a great sense of achievement and it’s very hard to describe the sense of awe you experience when you look down both sides of the arch to the pylons below at each end.  You can’t help but imagine how great a task it must have been building such a huge structure over 80 years ago and how proud the engineers who did so must have felt when it was completed.

My guide for the Bridge Climb was Dean, who had been guiding visitors up and down the bridge for over 16 years.  His commentary was very educational and laced with some good old Aussie humour throughout too.  It was a thoroughly enjoyable and unforgettable experience and one I’d recommend to anyone with a bit of puff left in their lungs and a sense of adventure.  For those with a genuine fear of heights, there are tamer alternatives such as the pylon observation platform or simply a stroll along the bridge footpath which runs alongside the road. 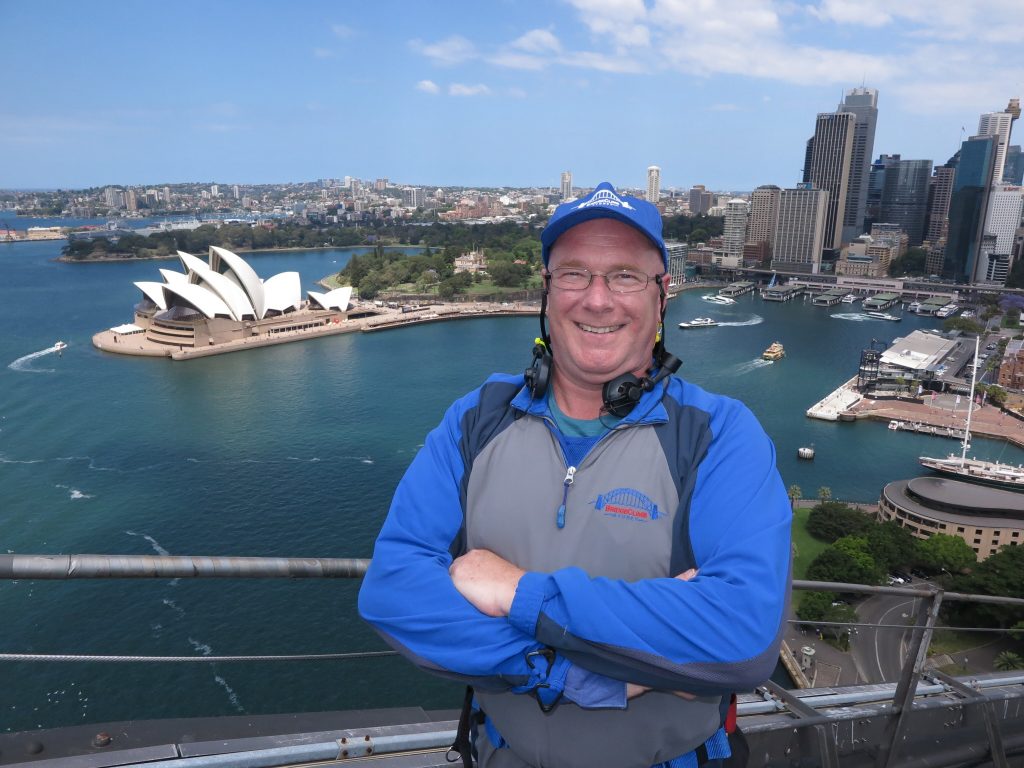 I can now authoritatively say that I’ve done just about everything I could to see and experience the harbour bridge from all perspectives.  And what perspectives they are!

and back to Mrs C…

Off the bridge we walked and as we were on our way down to The Quay, we passed one of those ads, outside a restaurant on Argyll St in The Rocks area,  proclaiming ‘Buffalo Wings 10 cents Wednesday ‘! As luck would have it, it was Wednesday and as both of us are partial to Wings anyway, our fate was already decided. So off we trotted into El Camino Cantina and asked the nearest barman if we’d imagined the price outside. Turns out there was a bit of a catch as you had to order a beer. No hardship there then. It was boiling outside and Beer o’Clock is all the more satisfying when you’re hot. 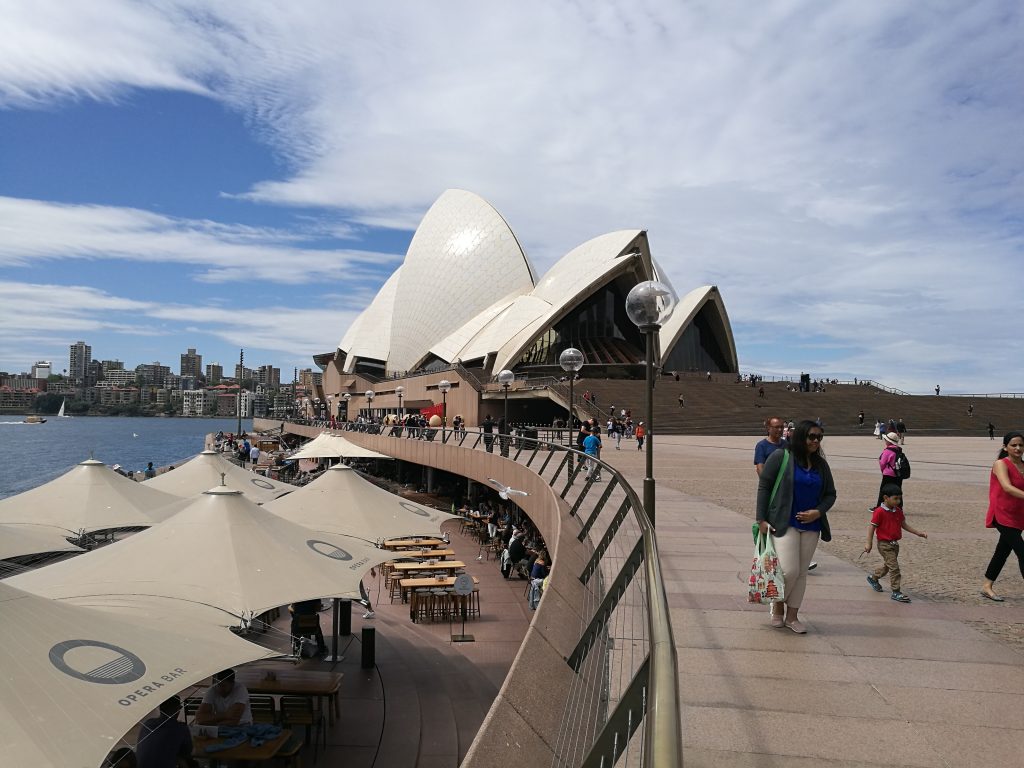 Circular Quay, when we eventually got there, was buzzing, and close up The Opera House appeared much whiter and much bigger. Strange?! There was a real cosmopolitan mix of people wandering around and it turns out that our previous observations about the huge number of Orientals was justified. Apparently in the last census, for the first time ever, the number of Chinese living in Sydney has surpassed the number of Brits.

We had been planning on pushing the boat out and going to Bar 36 at the top of The Shangri-la hotel for cocktails at sunset but we read so many negative reviews about the prices, the jostling for a decent table and the limited time slots that in the end we didn’t bother. We did however go to Mode Bar in The Four Seasons next door instead. No we didn’t have the view of the Sydney skyline but we had some superb cocktails and snacks and a whole lotta fun.

We ventured over to Darling Harbour one day at a tour-guide’s suggestion but I found it a bit of a let-down after Circular Quay. In my humble opinion, Cardiff Bay has the edge over it and it’s cheaper too. Granted the building work going on, the huge coach parties queuing for boat trips and the massive cranes photo-bombing every half decent pic, didn’t help matters. Nonetheless as is our wont, we found a booth in an al fresco Italian restaurant on the quayside and whiled away a Happy Hour or two with an icy cold Corona! 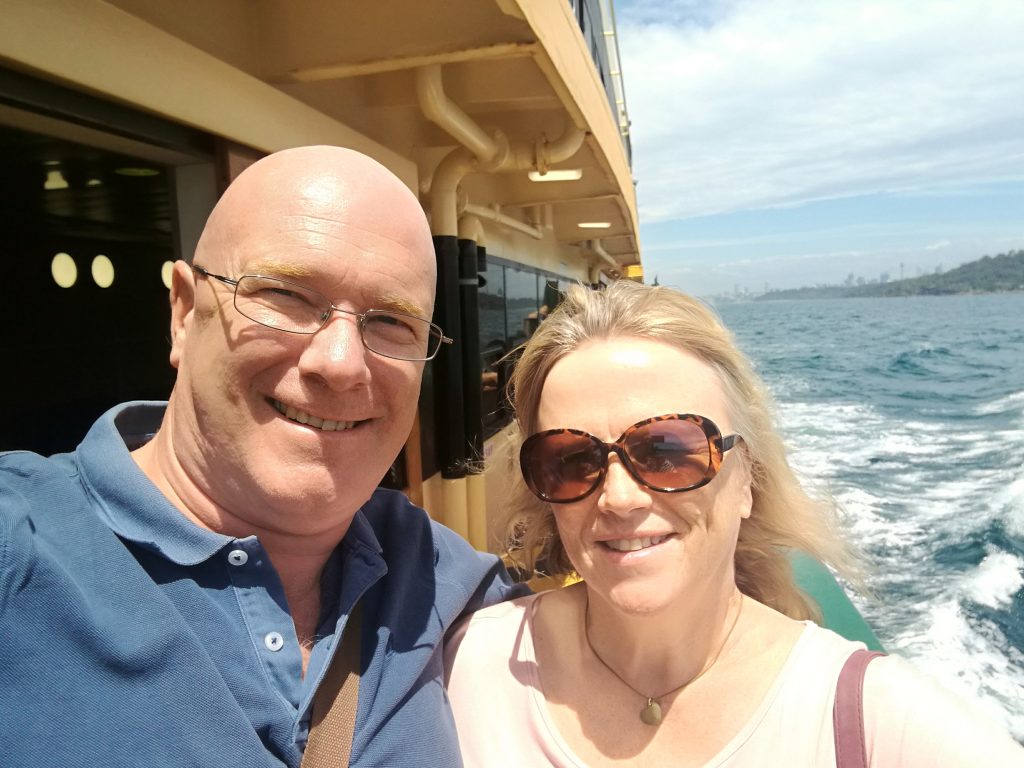 We’d been told that taking the ferry to Manly Beach was a must-do and what a lovely way to travel too in such a beautiful place. We bought a couple of Opal Cards (a kind of Aussie Oyster Card) to keep the costs down and got on the ferry near our flat in North Sydney and then changed onto the Manly one at Circular Quay. It was a lovely, relaxing boat trip with stunning views all around and comes highly recommended.

So were my high expectations met? You betcha and then some……

Cool isn’t one of those words that comes easy to me. Yoof-speak and me don’t really get on. Like lol and omg, I always cringe a little bit when I hear cool. I know, I know, it’s in the general lexicon now and anyone can say it ….. so I will. Sydney is cool! It’s fun, it’s flipping expensive, it’s hilly and very photogenic but more than anything it’s cool!

So goodbye Sydney, we’ve had a blast!