How were we to top the last few days? What was North Island going to offer?  Could it possibly get any better?  South Island gave us some of the most impressive, most beautiful and most ‘awesome’ scenery we’ve ever seen.  Auckland airport greeted us with grey skies and a cold southerly wind and after a complete fiasco with our car rental booking we were out on the road heading for our AirBnB in the outskirts.  Thankfully it was a lovely room in a new modern house and our host was friendly and welcoming – unlike Auckland’s now rainy weather! 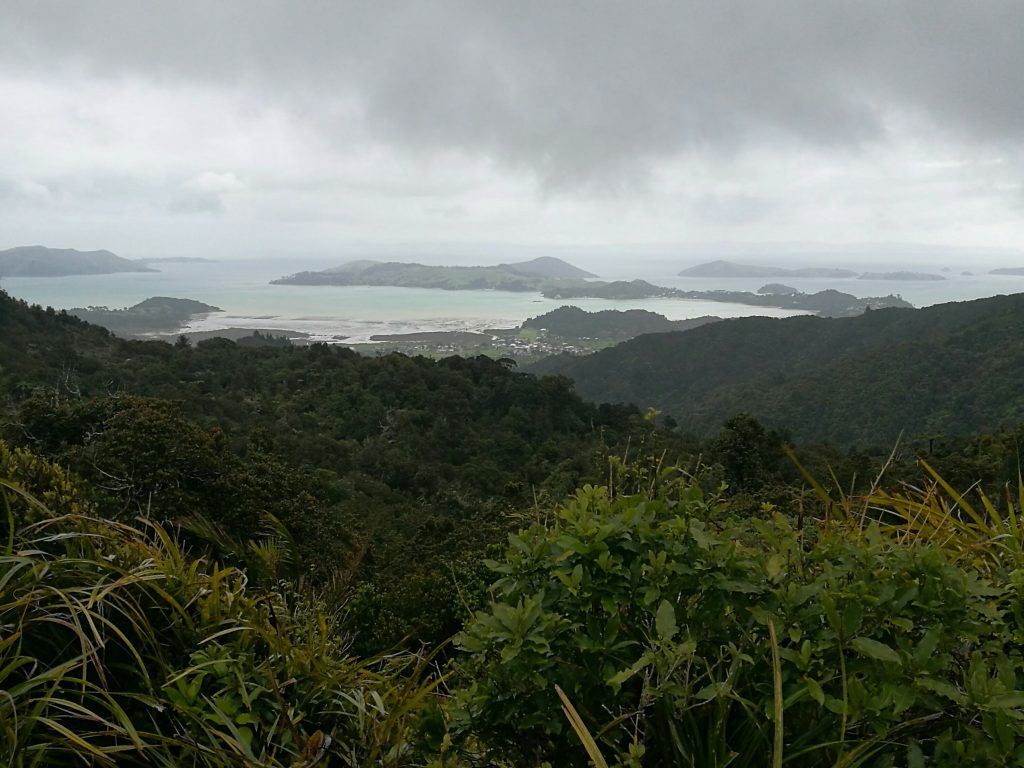 The following morning we set off to see Coromandel Peninsula.  Setting off through Auckland’s busy suburbs in the pouring rain we turned off to the east and after passing through Thames we turned to follow the coast road up to Coromandel itself.  It was wet, grey, windy and generally unpleasant, but we still managed to see lots of the winding roads and rocky headlands on the way up.  After a short lunch break it was time to turn up into the hills to cross over to the eastern side of the peninsula, so climbing up through the hills on those impressive and challenging roads we just about reached the top when a break in the clouds allowed us to take a quick snapshot back down the hill.  No sooner had we blinked, the clouds descended again, leaving us back in the murk. 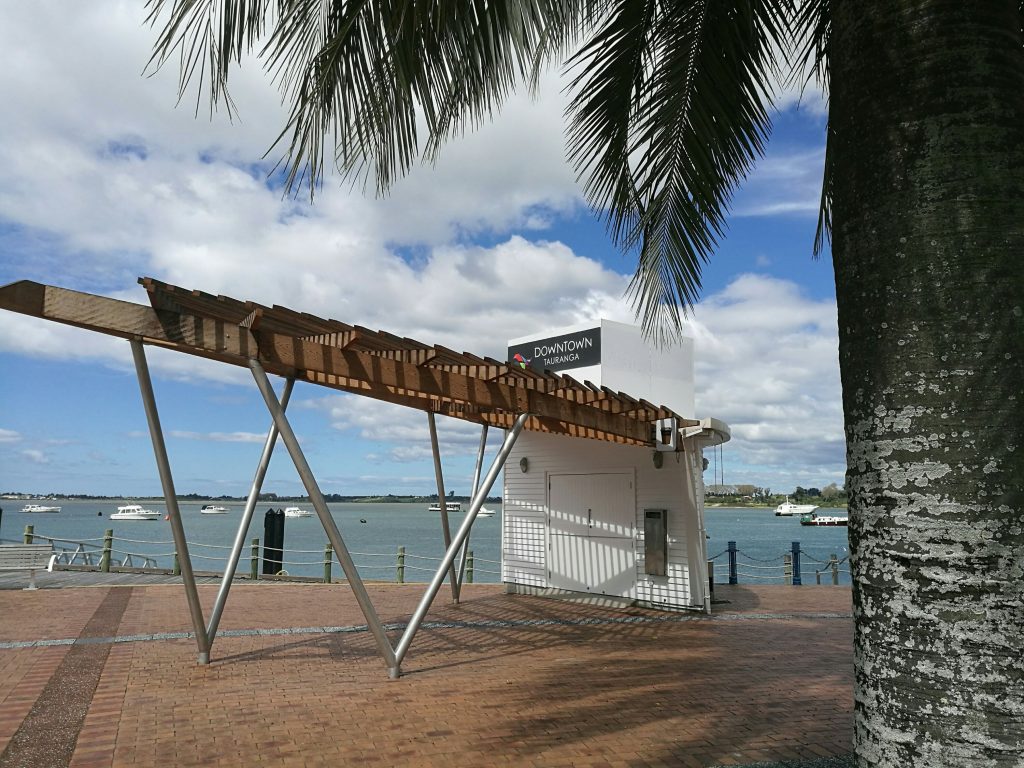 We were staying the night at a small hotel just outside Whitianga.  We chose it for its ratings in the hotel booking sites – very good on all counts – and booked their best room.  Little did we know until we got there, its ‘en-suite’ bathroom was accessed by going out through the door and into the driving rain and wind, down two flights of stairs (still outside) and into a little bathroom tucked beneath the stairways, all the while trying to preserve your modesty whilst on display to other guests using the communal lounge.  Outside loos are a thing of the dim and distant past in my memory book, but an outside bathroom, well, can you imagine Mrs C’s face when reality struck?

Despite a night of toilet trauma and some rather bracing early morning showers we then drove further down the coast to Mount Maunganui, where we’d be spending a few days with relatives, many who I hadn’t seen for many many years and some who I’d never met. 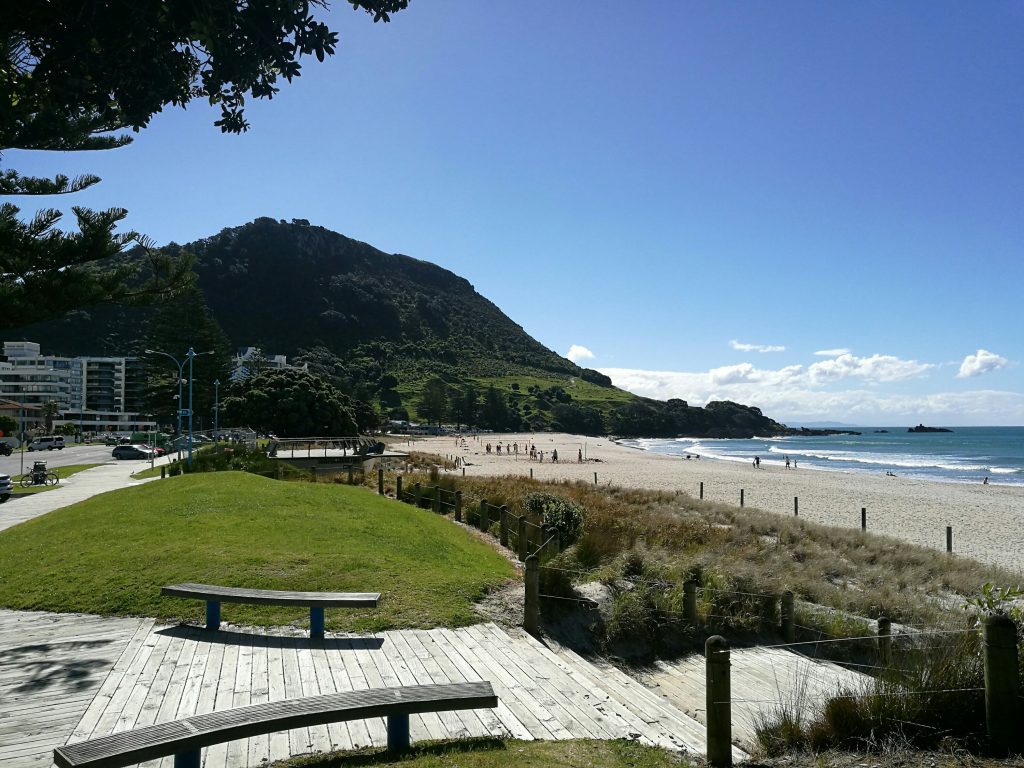 Mt Maunganui is a nice place.  A friendly, sociable, pretty, ‘nice’ place.  We popped down to Tauranga, its maritime neighbour on one day, and after reassuring ourselves that yes, there are just a few humans out and about there, we headed back to have what was to be a HUGE pizza with a pint in the ‘Astrolabe’ bar on Maunganui Road.  When I say huge, I mean it was the largest pizza I’d ever had.  They refer to it as their ‘half metre pizza’ for very good reason!  There are lots of lovely places to stop and sit for an afternoon drink in Mt Maunganui and on one afternoon the sun actually popped out to show its face.  It was an opportunity we were determined not to miss and we walked down the beach in the sunshine before having a couple of sundowners sitting outside the Mount Brewing Co. 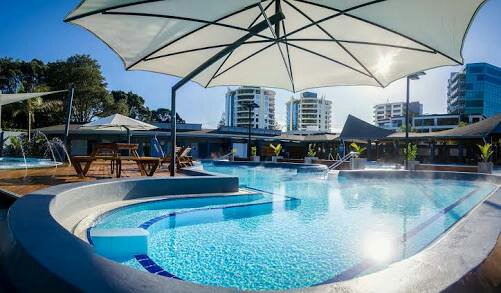 One experience we were determined not to miss was the Maunganui Hot Pools.  Situated at the foot of Mount Maunganui, these are outdoor geothermally-heated salt water pools.  We pre-booked an 8am slot on one day and braved the wind and rain again to cross from our apartment to get changed into our swimsuits ready for our dip.  It’s so invigorating being in a warm (hot, some would say) saltwater pool with the cold wind and rain lashing your shoulders and face.  We spent ages there, occasionally sitting up on the side of the pool to cool down a bit and to take a quick drink from the drinking fountain.  You dehydrate very quickly in that sort of environment!  It was a lovely start to our day, and with a pre-book entry fee of only $5 (NZ) each (around £2.60) it was great value too. 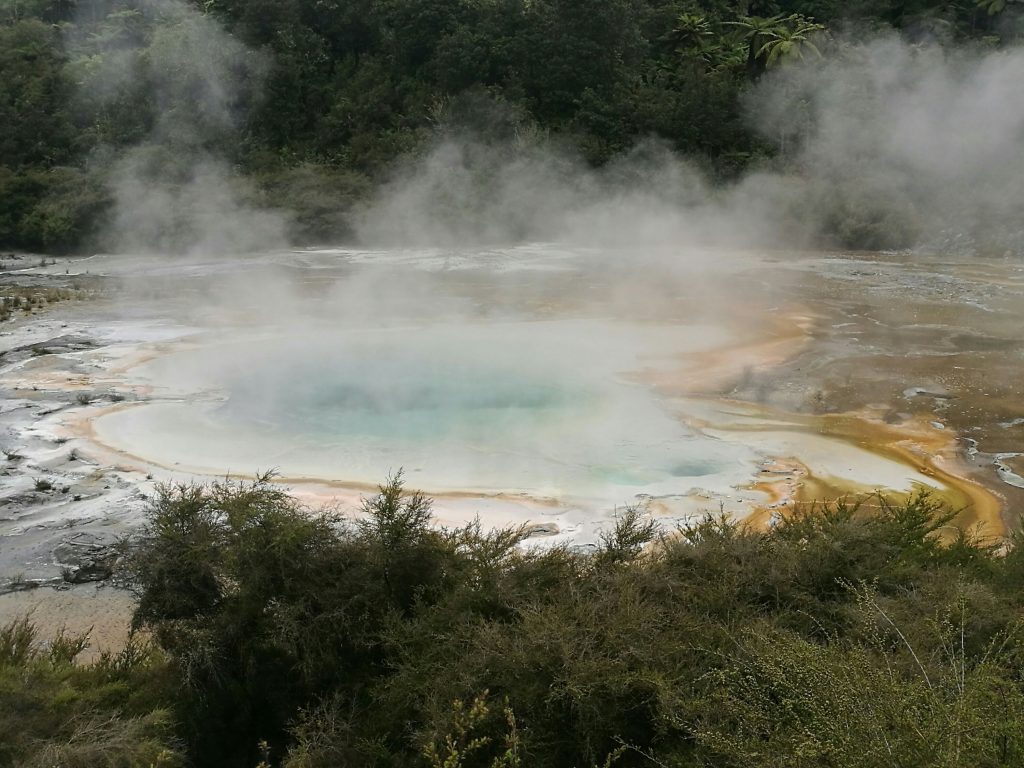 It reached a point where we really didn’t want to leave ‘The Mount’, as it’s known locally, but being travellers with an itinerary, needs must.  So we set off early in the morning and after some goodbyes and thankyous we headed south to visit Rotorua and the surrounding area before completing our North Island trip.

You know when you’re getting close to Rotorua by the smell, a really pungent sulphury rotten-egg type smell.  There are lots of geothermal ‘events’ in the area and we chose to visit Orakei Korako geothermal park because reviews described it as a little less commercialised and crowded than some of the other attractions nearby and less prone to invasion by large tourist groups such as those we’d encountered many times previously on our travels.  It was absolutely amazing.  Nature at its most raw, with bubbling springs, hissing geysers, boiling mud pools and some truly staggering scenery all set around an active fault.  And, as hinted at, it was quiet, very few people interrupting the sounds and sights of the park.  It was a truly unforgettable experience and well worth the extra drive off the beaten track to get to. 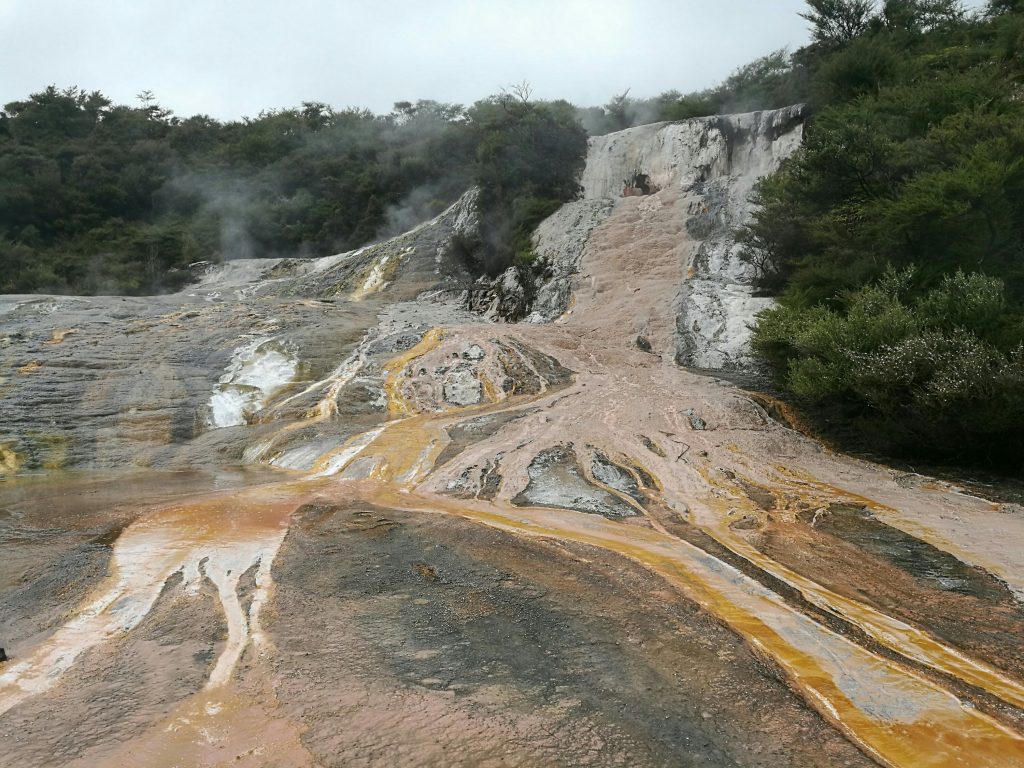 After getting our breath back and hitting the road again we headed across the island to our next destination – the famous Glowworm Caves at Waitomo.  Again, an unforgettable experience, with a walk through some truly spectacular caves, finishing with a boat ride in complete silence through a cavern completely lined with the pinpoint lights of glowworms all around.  The local guide was excellent, making the whole experience memorable and entertaining.

After staying at a motel in Otorohanga – accessed via a time-warp into the 1960s – we finished our visit to North Island with a stay at a contemporary and comfy airport hotel at Auckland before an early morning flight over to our next destination – Sydney.

Our hotels and accommodation were sourced using Airbnb and expedia.com