South Island, New Zealand proved to be as idyllic as we’d expected.  Apart from our fleeting but gorgeous visit to Cape Cod, the bit of our adventures I’d most been looking forward to was New Zealand. Unfortunately the journey there, all 13 hours of it, had to be borne first. We had the cheapest round-the-world flights we could find so weren’t expecting an upgrade. Nonetheless, it would have been nice. The Air New Zealand flight we were on from Los Angeles to Auckland was reasonable enough I suppose. It was telling though that we had more legroom on the domestic flight from Auckland to Christchurch and that was nearly 12 hours shorter! 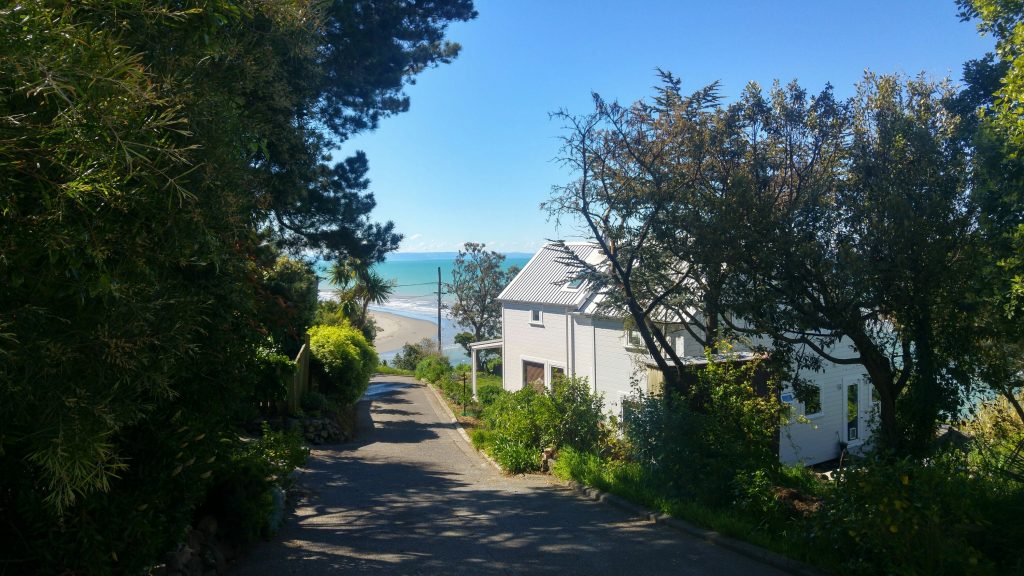 Anyway enough of all the whingeing, we got to South Island in the end and boy was all the discomfort and airport hanging-around worth it! We lucked out big-time with our AirBnb just outside Christchurch. We were staying for a couple of nights in Sumner which in itself is a pretty idyllic place. Our modern and well-equipped studio was part of an architect-designed house the like of which you could imagine Kevin from Grand Designs rhapsodising over. Our view was nothing short of spectacular and I feel very envious of anyone who can wake up to that view every morning! 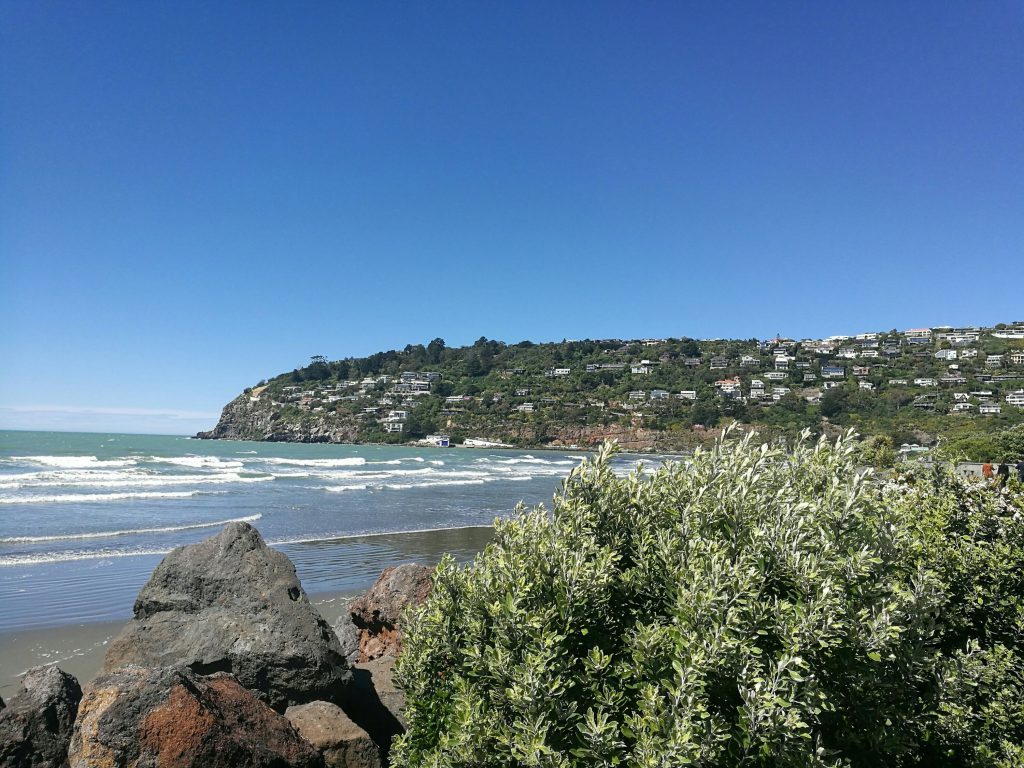 As you can imagine, we slept like the proverbial logs that first night and next morning we were raring to go, albeit slowly in my post-bronchitis state. We’d been told by our AirBnb host Chris that we really should go to see the ‘earthquake damage’ in Christchurch. We’d obviously been planning on going there anyway but it seems that the quake and its aftermath has become a ‘huge thing’ here. Not surprising really when you consider how high the death toll was. Hagley Park was an unexpected delight and we had a lovely walk through The Botanical Gardens. 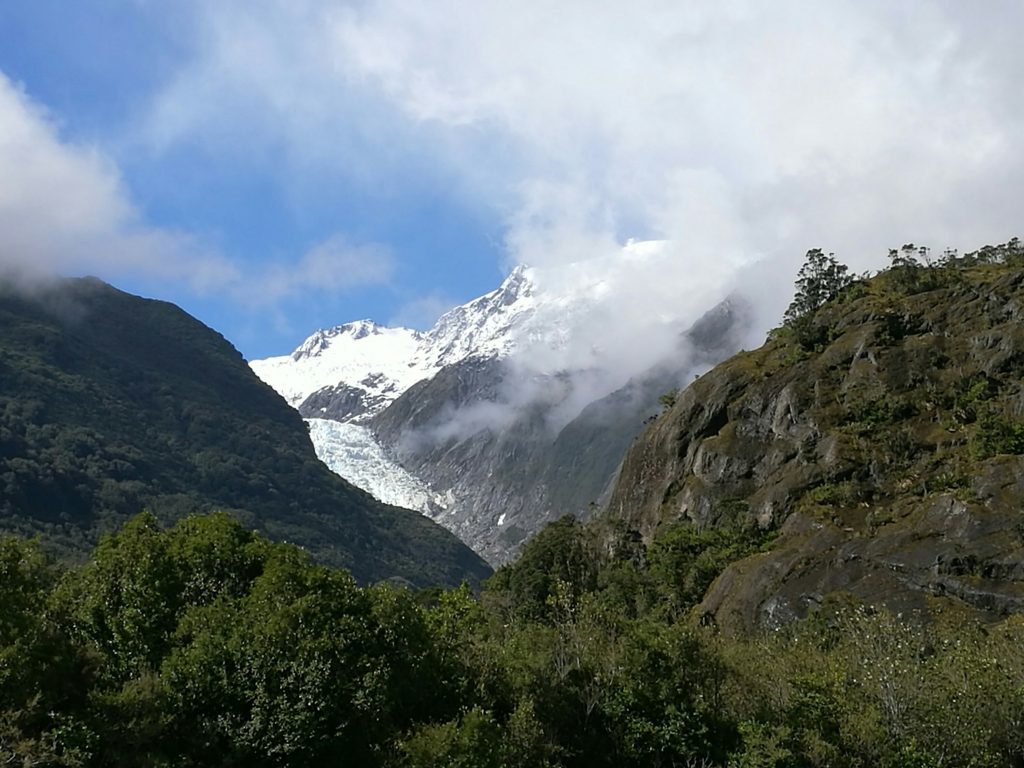 Our next port of call on our tour of The South Island was Franz Josef and its famous glacier.  Our arrival was greeted with ever-looming grey clouds, which before we knew it turned into driving rain.  Not the best glacier-viewing conditions really.  So we donned our waterproofs and found a warm and comfy hostelry and ordered a couple of local beers to try.

Post-bronchitis/pneumonia didn’t seem the optimum condition in which to do a heli-hike up the glacier next day.  I can only imagine how much that cold air would have made me cough. I was bitterly disappointed and certainly didn’t want Mr. C to miss out because of me. He was adamant though that he didn’t mind so on we went to Wanaka. 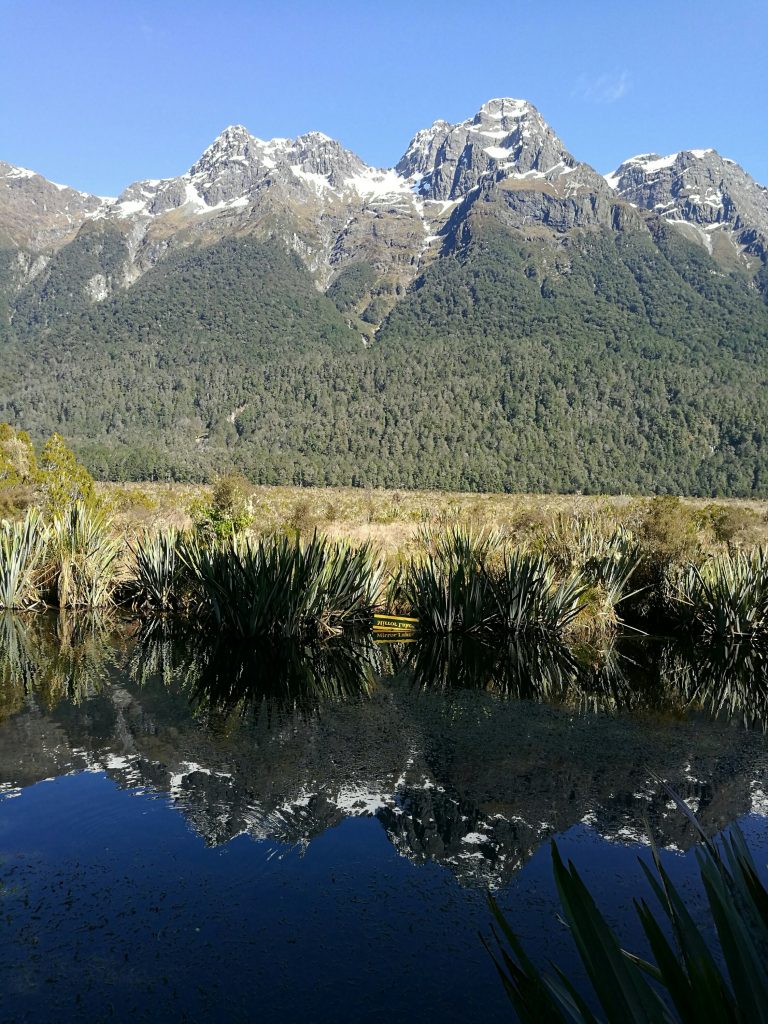 South Island is incredibly beautiful and it’s as if there’s a ‘Wow moment’ around every corner. No sooner has your jaw dropped at the sun glittering on the tops of the snow-covered craggy peaks on one side of the road, than you have to pull over at one of the many viewpoints to admire the bluey-grey tumbling waterfalls on the other side. We saw lakes where the reflections in their mirror-like surfaces were actually better than the real thing. Many of those lakes, not surprisingly, are called Mirror Lakes. Unoriginal maybe but very apt. 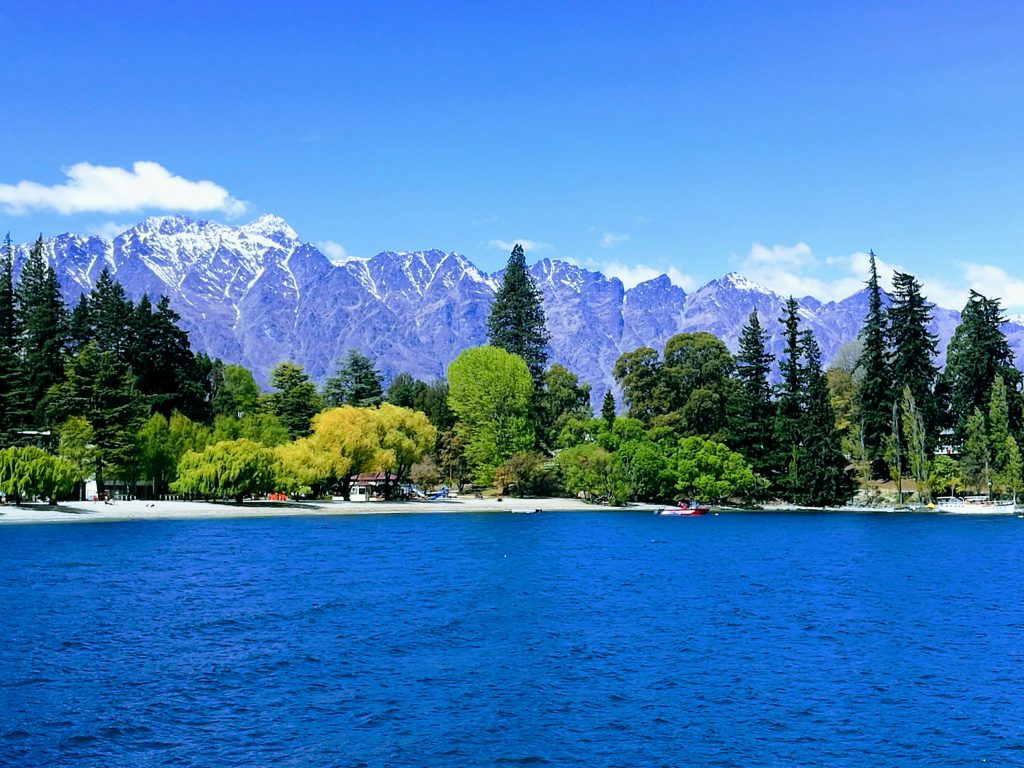 Mr. C seems to have a photographic memory when it comes to routes and names of places we’ve been to. I, on the other hand, can barely remember the names of places I’ve lived near for past nnnnnnty years. So many of the places we stopped at began with a W or T and ended in an A or O that they kind of blur into an amorphic Wangamatadingdong after a while. What I can say though is that I’ve never been to a more beautiful place in my entire life. I truly envy the Kiwis who wake up every morning to sights like the ones we’ve witnessed over the past few weeks. 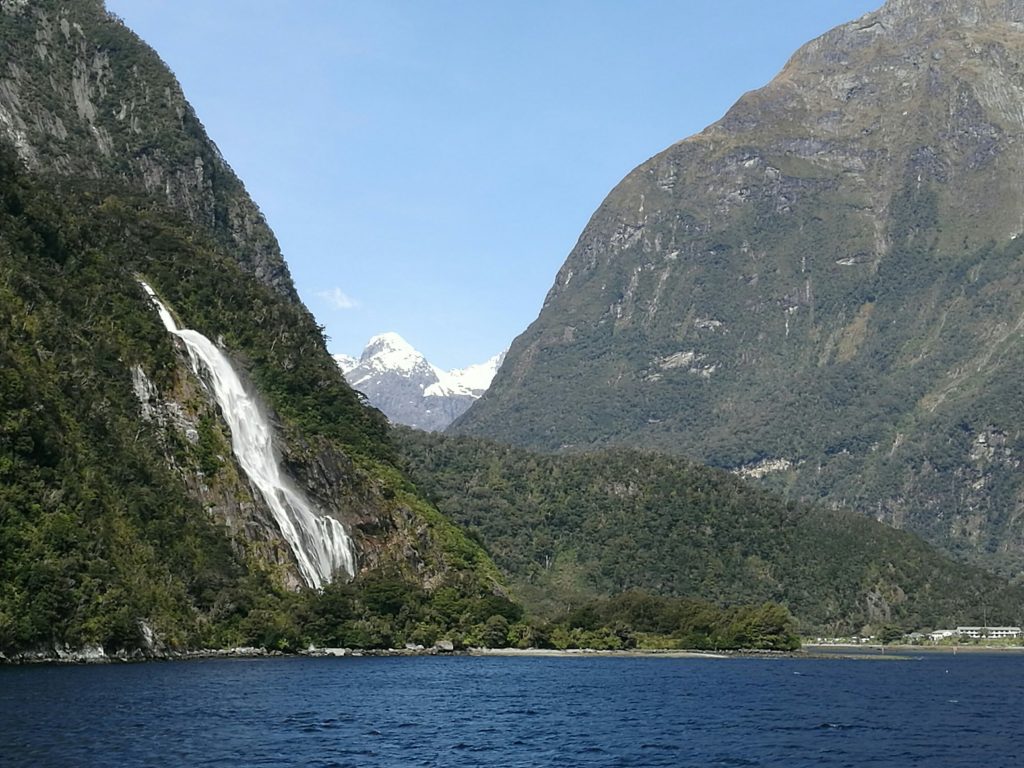 Queenstown was memorable for many reasons, not least of which, for the infamous Fergburgers which two of ‘the daughters’ had told us about. Mr and Mrs Ferg seem to have the monopoly on the best burgers in town, so much so that they’ve ventured into the world of gelatos and baked goods. Queenstown was probably the busiest place we went to but because of its setting on Lake Wakatipu, it seemed peaceful, even restful. We went on a coach trip to Milford Sound on one of the days in Queenstown. A long drive yes but through truly awesome scenery and what a final destination! 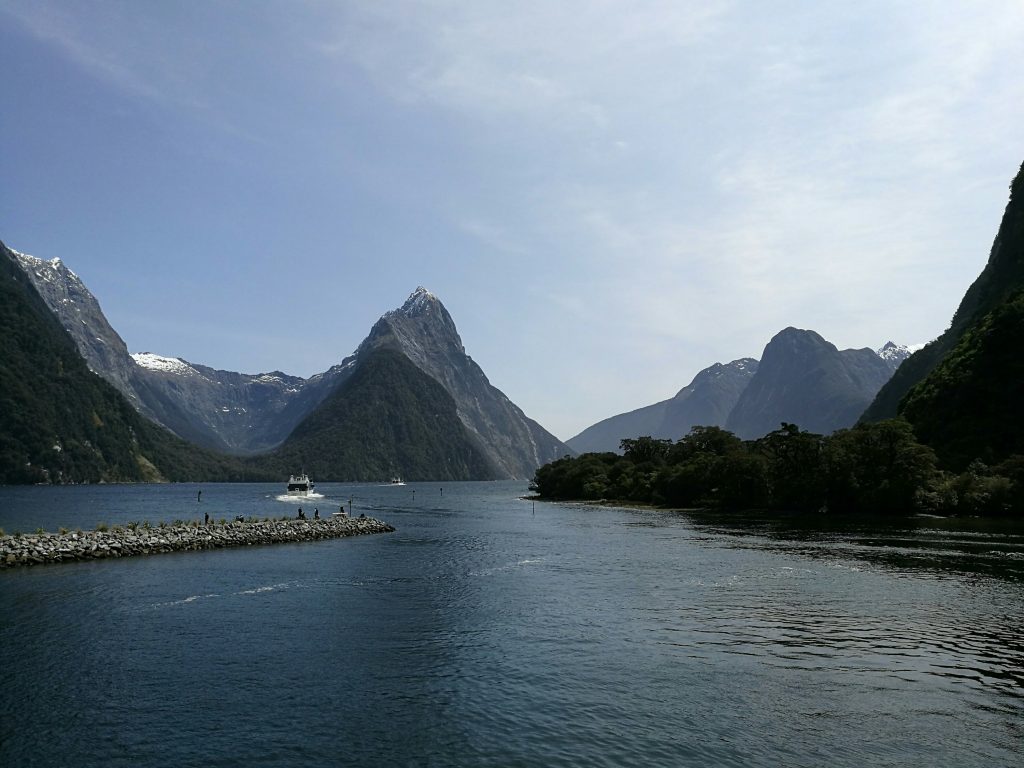 We often laugh when a waiter describes a steak as ‘awesome’.  How on earth can a simple slab of beef on a plate be considered ‘awesome’?  Milford Sound and its approaches on the other hand… they really do leave you speechless with their sheer magnificence.  It’s very hard to put into words the scale and majesty of the landscapes.  Even good photos don’t do them justice. 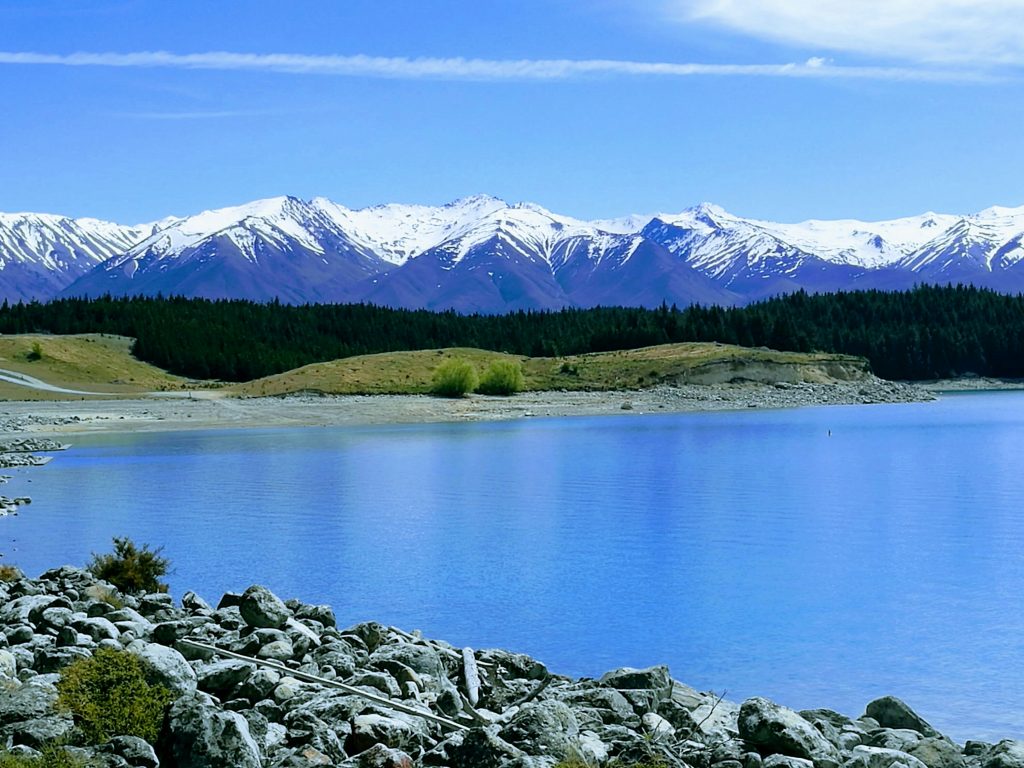 … and the final words from Mr. C, my chauffeur?

“There’s also something about the roads on South Island that seems to focus you in to each landscape, whether it’s a snowy peak at the end of a long straight that seems to disappear into the horizon or a windy road that goes over the brow of a hill suddenly confronting you with a real picture-book scene.  It really is like nowhere else I’ve been to.”

Our hotel stays were mostly booked through expedia.co.uk

Many thanks to www.alamo.com for their superb service with our hire car.