It’s a while since I had a good rant about anything.  Anyone who really knows me will vouch for the fact that I’m generally quite a tolerant person, and it takes a lot to rattle my cage.  However, that doesn’t mean to say that certain things don’t stir up my grumble bugs from time to time.  There’s a sign on our living room door which says something to the effect of “A lovely lady and a grumpy old man live here”.  Am I grumpy? 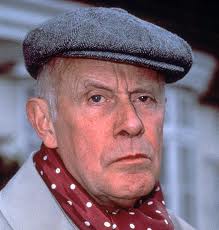 I suppose I have my moments, but there are other times when I’m decidedly anti-grump and will try to get others to see the lighter side of things.

As they often say on ITV, the following are the results of my pet hates vote and they are – in no particular order …

1.    Long addresses: In our business there’s a fair amount of dealing with addresses, whether they’re traditional geographic addresses or the newer and supposedly far more simple electronic ones.  The event that brought this to light was a few days ago when we were doing a little contact-management maintenance work.  Why, when an email address is supposed to be concise, simple, quick and all the other things electronic communications are meant to be do a large percentage of the employees of Public-Relations companies have email addresses that would challenge North-Walian mainline railway stations for waffle factor.  Why don’t PR companies do just a little bit more research when it comes to choosing internet domains?  I know that many of the shorter domain names have been gobbled up by the resellers, but it doesn’t take too much looking around to find a short-ish domain name that is appropriate to their company name?
Having typed probably fifty or more contact addresses into our own records recently I found myself becoming irate at the number of so ridiculously protracted email addresses out there in the PR industry.  Why would someone realistically choose (and this one’s fictitious) jennifer_wright-harrington@alongnameprandcommunicationscompany.uk.com not choose jen@company.co.uk instead?  Admittedly, it’s not always the individual who’s at fault here.  Any IT professional worth his or her salt would realise that the longer an email address is, the greater the margin for error at the remote end.

This brings me on to those street addresses…
I’ve been reliably informed by a couple of sources at the Royal Mail (you know… those ones whose work force is doing its best to destroy whatever is left of that wonderful and historic institution) that all you need to ensure a successful delivery is a house or building number – or name – and an accurate UK postcode. Let’s say we live at Number 141, BS18 4GE.  That would get anything to us there.  It’s easy, leaves little room for error and saves paper and ink.  What about some of those I’ve whinged at lately?  (This one’s fictitious too..) Daffodil Cottage, Buttercup Close, Daisy Road, Flowerbed, Gardenville, West Horticultshire, England, United Kingdom, FB12 4BC.  Even those plebs who can’t find their way to the bathroom in the morning without a sat-nav would be able to find “Daffodil, FB12 4BC” by simply typing it into their little battery-powered brains.  So why labour over such an unfeasibly large work of literature for an address?  Beats me!

2.    Tailgaters: You know the ones… those who seem to want to try to intimidate by driving so close to your rear bumper that they must be choking on your exhaust fumes.  Just down the hill from ‘Chateau C’ is a T-junction that at certain times of the day requires a small helping of either bravado or cheek to get out of if you don’t want to end up waiting for half an hour while the rush hour finishes.  A right turn manoeuvre at this junction is an art-form and I like to think I’ve pretty much perfected it now.  All that’s required is a bold statement of intent when a large enough gap appears.  It’s the only possible way of getting out of there.  Waiting for a clear road is simply not an option.  So there was I a few weeks ago, doing my usual, and sneaking through the small, but useable, gap that became available.  At the very worst it necessitated one vehicle slowing for a couple of seconds to keep a safe distance after I’d pulled out.  Oh no, not for Mr Angry with his aggressive chip-on-shoulder mentality and his “My wife abuses me at home so I’ll take it out on everyone while I’m suitably anonymous behind this gas-guzzling roo-barred road-hog machine” attitude!  Anyone would think I’d stolen his best copy of Trainspotters Monthly.  The stream of traffic was moving along at around 25 mph, which my own car, though by no means a high-performance specimen, achieves in just a few seconds.  So why did he then have to drive up to around ten inches from my rear bumper, leaning on his horn and gesticulating some sort of  orchestral conductor’s movement in close proximity to his own windshield.  That sort of thing starts to wind me up too.  However, at the same time, it gives me great pleasure in a situation like that to follow the advice of all the advanced driving manuals and to slow down until a safe distance exists behind.  If I’d have sped up, he’d still have been there with his testosterone-fuelled alter-ego frothing at the mouth, only inches behind.  How lovely it was to see him suffer as a result of his own stupid actions.  It even happened to me very recently in some leafy village somewhere in the Midlands while we were returning from our narrow boat adventure.  Only on that occasion it was a woman, not a man.  I reckon she’d messed up her HRT dosage that morning!  How sad!

3.    Cold Lattes…  If you’re paying a premium price for a ‘good’ cup of coffee, the very least you’d expect is for it to be hot.  Mrs C and I are frequent patrons of the various coffee establishments scattered around town and we generally have lots of good things to say about them.  Yes, we are self-confessed coffee-snobs and take great pride in our own abilities when it comes to producing that irresistible ‘proper’ coffee.  None of your Nescafé mediocrity for us.  Fresh beans into the grinder and milked steamed, not microwaved!  On the rare occasion we happen across a den of coffee apathy (mentioning no names – Warminster services on the A36!) we have a really good mutual whinge and even though it doesn’t make the coffee taste any better, it makes us just happy enough for us to make it to the next refreshment post.

My goodness, this is getting ridiculous.  Running out of time and only 3 done!  I must be an old grump after all.  Don’t you just hate those who labour a point or three?

One thought on “Those Pet Hates”