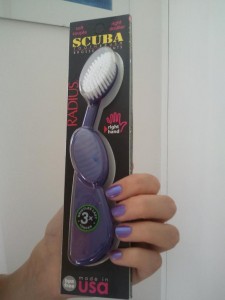 I have just started using a Radius Toothbrush and am reserving judgement properly until I’ve been using it for a few months.

Radius claim that their toothbrushes last for up to 9 months which is loads longer than ordinary toothbrushes. Apparently their bristles don’t absorb water and this means they last longer. Well, we’ll see!

I am rubbish with toothbrushes and am forever having to buy new ones because the bristles on mine have gone all soft and bendy. The Radius bristles are said to reduce enamel erosion too, so I’ll be interested to see if this is proved correct as I’ve just been told by my dentist that I have erosion on one of my teeth – probably from over-brushing.

As you can see in the pic, the head is huge compared to other toothbrushes and it’s also got a strange handle. Apparently the handle is ergonomic to ensure that the teeth are brushed at a 45 degree angle which dentists recommend. I’ve got a right-handed handle but my daughter has a Left Handle for obvious reasons. I’ve got to say that the brush feels really strange in my mouth but I’m sure I’ll get used to it. I have the Scuba version which has a rubberised handle for exuberant brushers like me.

I’ll post again in a few months and say how it’s going with the Radius Toothbrush. It’s early days yet – but so far, so good!