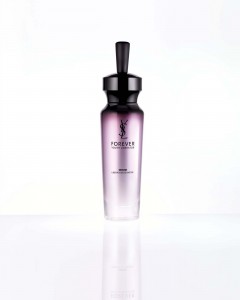 Yves Saint Laurent’s Forever Youth Liberator Serum is a new skincare product which, according to the ‘blurb’ anyway, is based on on glycobiology.

It seems that the sciencey bods at Yves Saint Laurent have discovered that as we get older the number of glycans in our skin  diminishes. Apparently this leads to the cells ‘locking’ and and consequently delays the skin’s regeneration. Yves Saint Laurent say that their Glycanactif™ unlocks the cells to reactivate them and ‘liberate the youth potential’ of the skin.   Glycobiology is clearly going to be a pretty big deal in the future and this has already been recognised as the new science already has 7 Nobel Prizes to its name!

Enough of the mumbo-jumbo and complicated stuff and down to the nitty-gritty now. I’ve basically been trying this serum for around 3 weeks or so and I’ve got to say that from Day 1 , it made my skin feel really silky and smooth. I’ve read on some other blogs that lots of women said they had a definite glow after using the product. Sadly I wasn’t one of those lucky ladies. I haven’t noticed a decrease in the number of wrinkles and fine lines but it’s fair to say that once I’ve put the product on, there is a kind of blurring of the finer lines.

So the Youth Liberator Serum hasn’t so much made the wrinkles go but it does appear to cosmetically reduce their appearance. Does that make sense? There were a few days over the Christmas break where I even went make-up free (mascara aside) as I felt that the YSL product had given me a bit of a soft-focus look.

I do like the serum but to be honest I don’t think it’s worth the high price. There are other face serums available which seem to do a similar job and until I have proof, presumably over a much longer period of time, that the Yves Saint Laurent Forever Youth Liberator Serum is going to permanently reduce the look of my wrinkles then I will carry on using the alternatives which are around.