My daughter Maddie & her boyfriend Lee have recently returned from a short spa break at the Ocean Hotel in Butlins, Bognor Regis – here’s what they had to say.

“I didn’t know what to expect exactly because I’d never been to a Butlins of any kind before but we were pleasantly surprised!

The room we stayed in was called an Atlantis room and altough there were only the two of us, it would be perfect for a family of four as there’s a separate ‘Kids’ Den’ in the room with two single beds. The rooms were really spacious and very stylish and contemporary. We really loved the mood lighting and the lovely little balcony we had! There was a flat screen TV in the room but to be honest we didn’t really watch a lot of it because we were

so busy the whole time. Every time the cleaners came into our room they left a towel in the shape of a cute animal. I had to take a picture of this elephant towel to show everyone!

We were surprised by how much was going on in and around the resort. When Butlins say they have something for everyone, they really do mean it – there were funfair rides, go- carting, a climbing wall, crazy golf, a huge swimming pool and loads of restaurants, cafes and pubs. We ate out the one evening in Turner’s Restaurant

which was recently opened by Michelin star chef Brian Turner who I am reliably informed used to be on ‘This Morning’ regularly. The food was scrummy there and not too expensive either to be honest.

It’s got to be said though that neither of us were impressed with the food in the Kaleidoscope restaurant which came as part of the Dinner, Bed and Breakfast deal we were on. The dinner was more like the sort of thing you’d get in a school canteen – cold potatoes, congealed gravy and chicken that was more bone than meat. The Breakfast was sa bit better and we enjoyed it much more on the second day as we’d kind of sussed out what was ok to eat and what was not!

When we arrived we went straight over to the Ocean Spa where we were fortunate enough to have the whole spa area to ourselves for nearly two hours. I loved the spa (although I did think that the orange plastic chairs weren’t really in-keeping with the rest of the

spa area, which had a lovely spa-y feel to it!). There was a really nice warm pool where you could turn on bubbles and jets of all kinds, a sauna, steam room, Disco showers (with music playing while you shower!), an outdoor hot tub and a snow room. The snow room was something out of the ordinary but it was way too cold for me! Give me heat anyday! Lee had never been to a Spa so wasn’t particularly looking forward to going in but he ended up enjoying it so much that he couldn’t wait to go back the next day for his ‘treatment’!

It was a little bit busier the next day but it was still incredibly relaxing. After another two hour spa session, we were booked in for our treatments. Lee had a ‘Full Body Comfort Lomi Lomi Hawaiian Massage’ and he says: “It was amazing. I felt so relaxed and so cleansed afterwards. All the staff were lovely and made me feel really welcome.” 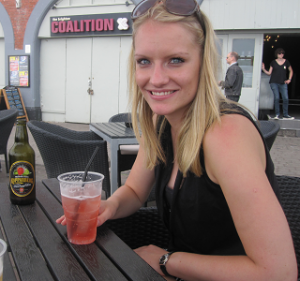 y treatment was a Mini Massage followed by a Radiant Revival Brightening Facial. I love having treatments, and in particular facials, done and this one was so good (one of the best I’ve ever had!) I kept dropping off because I was so relaxed! Here’s a list of all the treatments available at the Ocean Spa. I really would recommend having one. To end our last day at The Ocean Hotel, we had a few relaxing drinks sitting outside the Beachcomber Inn.

We only had two nights at the Ocean Hotel & Spa but when we left we both agreed that we could happily have spent a lot longer there. It feels like we only experienced a tenth of what is available to do at Butlins.”