To a soundtrack of The Eagles, Fleetwood Mac and other stalwarts of the soft-rock world on ‘The Bridge’ at Sirius XM, we mosied on down Route 66, stopping off to take pics of 1920s petrol pumps and to drink coffee in diners which looked like they hadn’t changed one iota since the late 60s.

Other than a simple stop over in a little hotel outside Springfield Illinois, our first main place of interest was to be St.Louis.  St Louis’ significance is that it was one of the earliest crossing points on The Mississippi River and was therefore considered to be the gateway to the West. Hence its name, The Gateway Arch.  It’s also at the confluence of the two great rivers, the Missouri and the Mississippi. 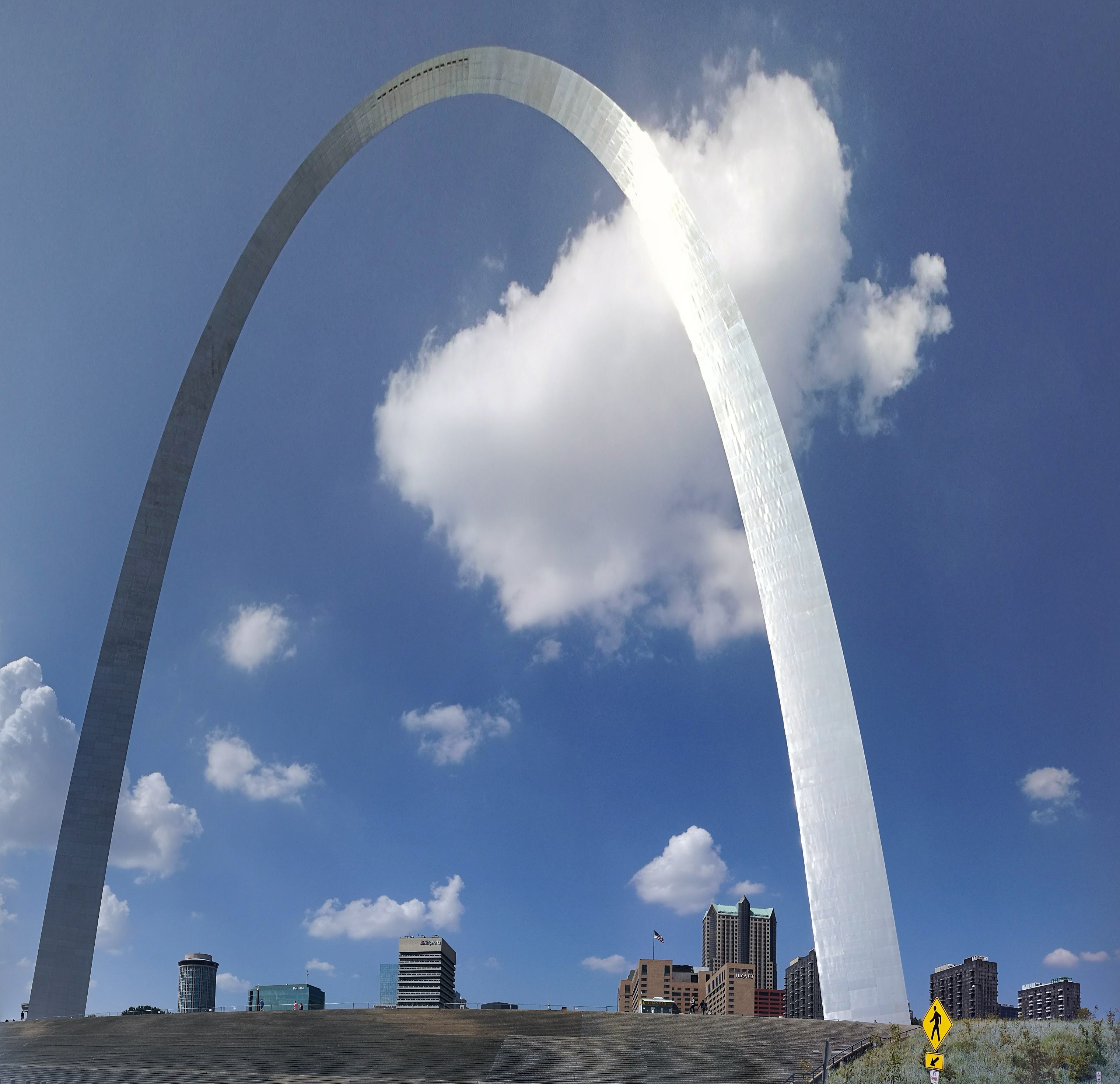 The Gateway Arch in St Louis was one of the must-sees on our list, not that I’d ever heard of it until a few weeks ago. Driving into St Louis over the Martin Luther King memorial bridge, we could see the famous Arch dominating the skyline. I had no idea how enormous it was until we reached it. We’d walked from the car park about a 15 minute walk away, in ridiculously high temperatures and I swear I was semi-delirious. It wasn’t far off 100°F and I was too!

One thing we’ve noticed is that the Americans love their flags. Driving through the various suburbs, cities, industrial parks, malls, people’s front doors, wherever, there are American flags of every size. Some of them literally dwarf everything around them. 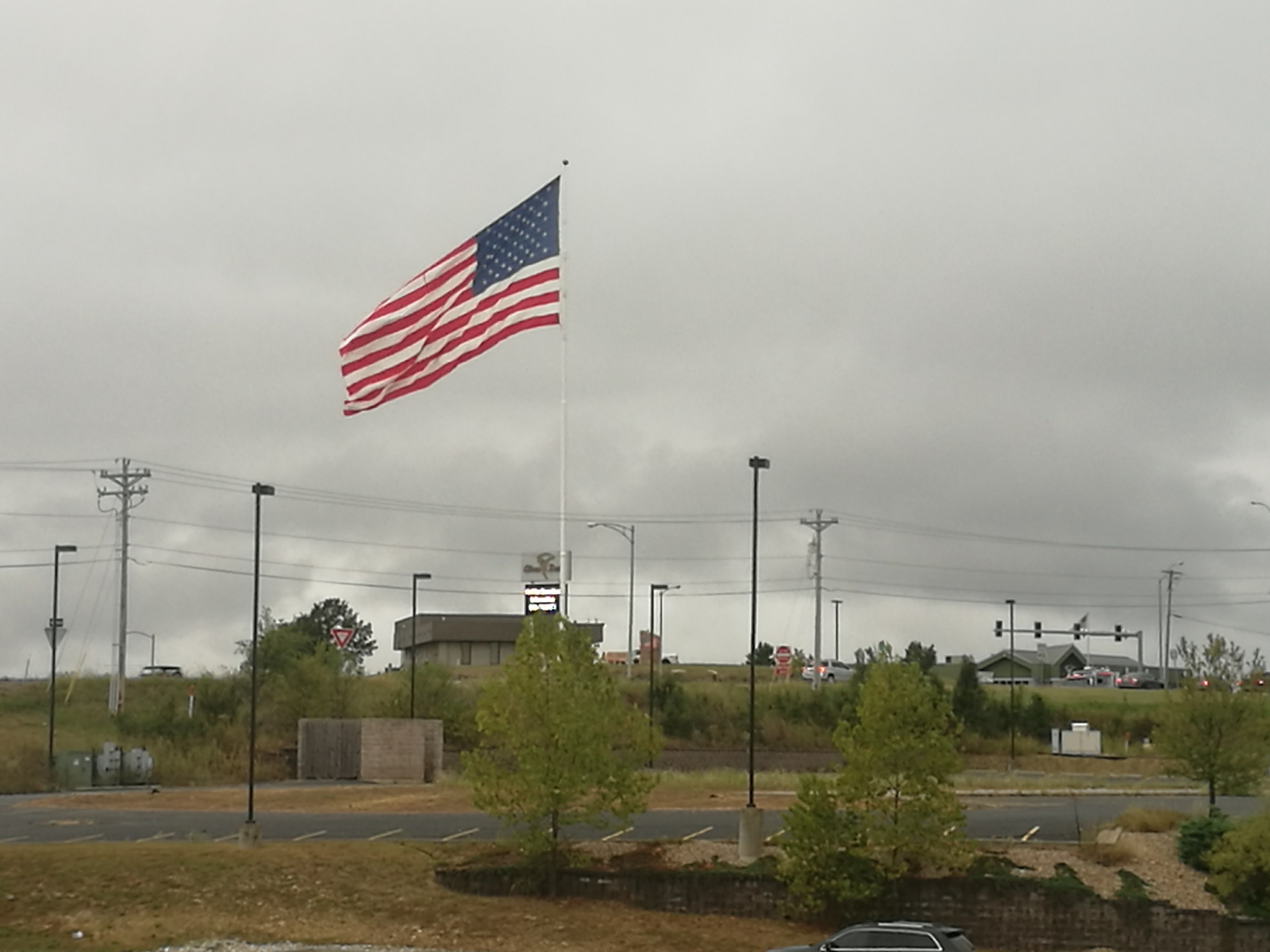 Wednesday started with the welcome break in the weather that had been promised for days. Raining, grey and significantly cooler we set off for Tulsa. An interesting day for Route 66 geeks today apparently as we passed through three states – Missouri, Kansas and Oklahoma. 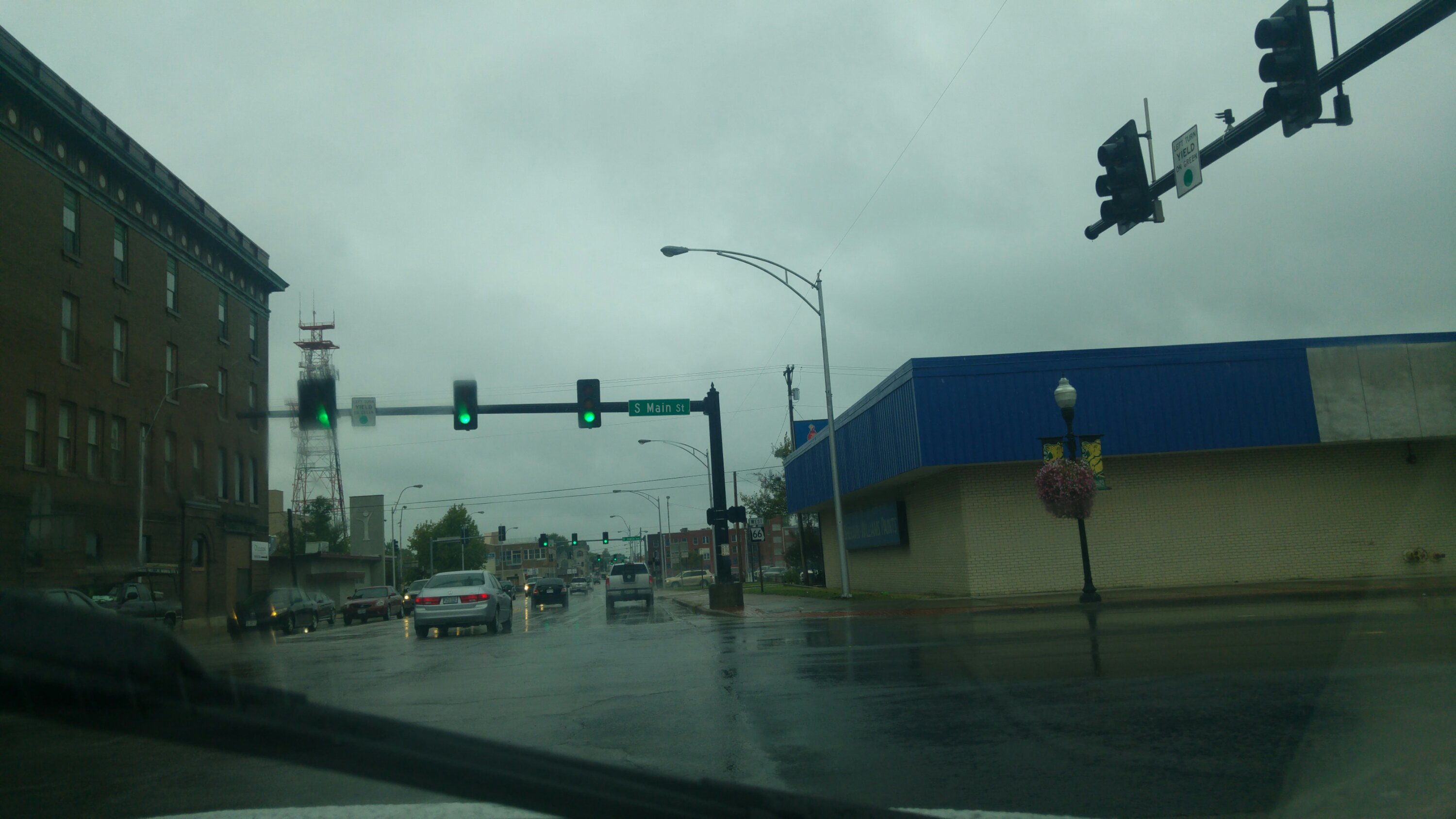 Passing a sign on the side of the road ‘Hitchhikers May Be Escaping Inmates’ didn’t exactly inspire confidence so after a quick check that our doors were firmly locked, we carried on our merry way past six police cars with flashing blue lights and a posse of State-Troopers staring at an upturned car! Have we mentioned before how stupidly fast people drive here? 70+ feet lorries overtake us with frightening frequency thundering down the roads.

This current stretch of Route 66 runs parallel with Highway 44 so we’ve been hopping on and off to see various ‘interesting’ bits.  One thing we seem to be finding every day is how impoverished, neglected and dilapidated many of these places are.  For whatever reason, one expects the USA to be an advanced, prosperous and idyllic place to live, offering the textbook cosmopolitan harmonious lifestyle that the rest of the world envies.  The truth seems to be quite different.  It’s sad, poor, unsafe and positively frightening in places.  So many of the people we see are really down-at-heel, some unwell, and many seem to be existing rather than living. There’s also an omnipresence of rust.  Anything and everything that’s made of metal seems to be rusting away; bridges, billboards, water towers, road signs… even the poles holding up the aforementioned flags seem to be rusted and neglected. 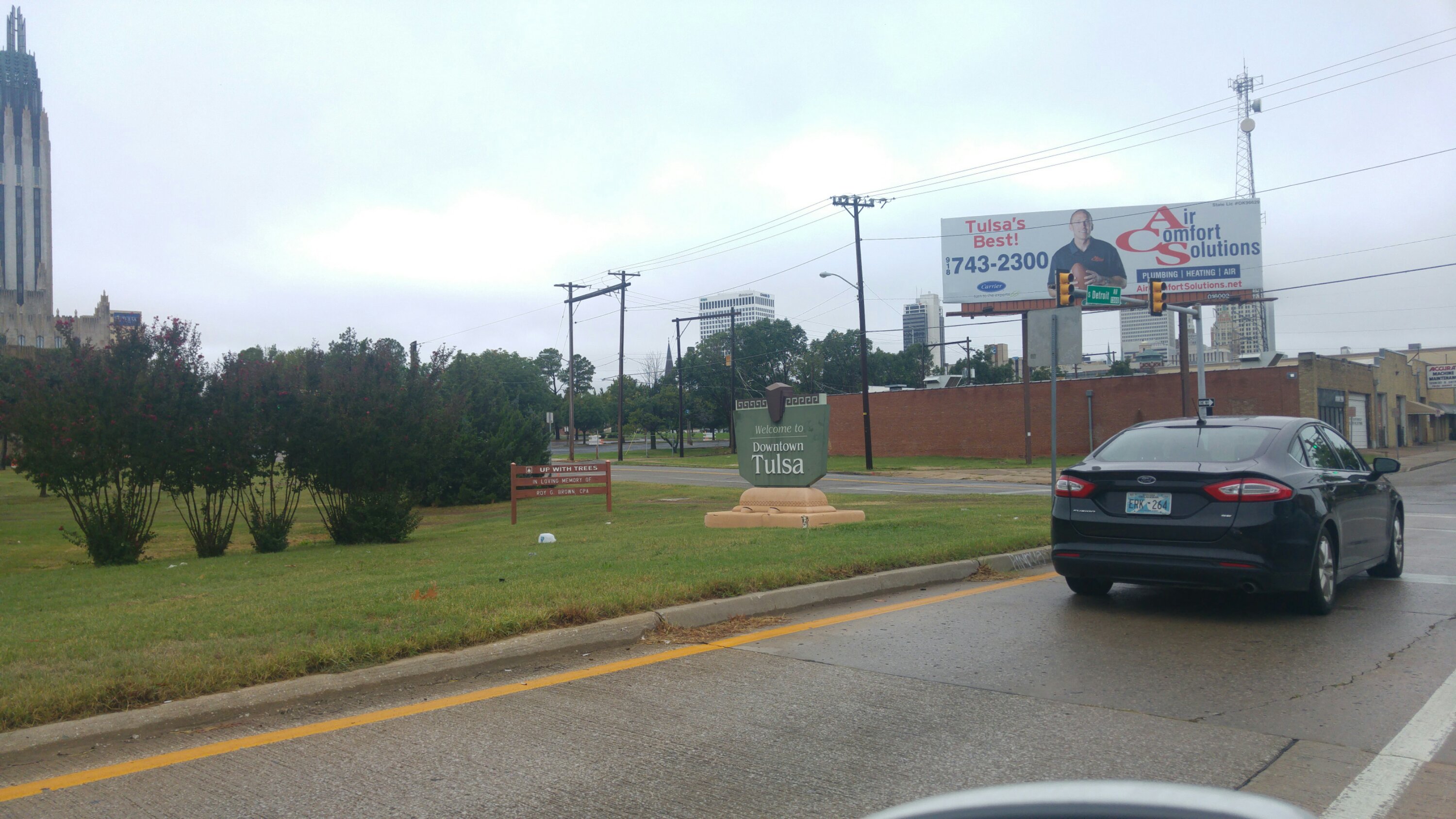 Walking through the streets of Tulsa last night was quite a scary experience too.  It was very quiet, scarily quiet, and the only people we saw on the streets were either begging, out of their minds on whatever substances they’d been taking or hanging around street corners in menacing groups of hooded, shady characters.  According to the research we’d done in advance the place to go was the Blue Dome area. A lively, hip and trendy place to hang out.   So we went there and it too was under the spell.  Deadly quiet, menacing and not a very pleasant place to be. 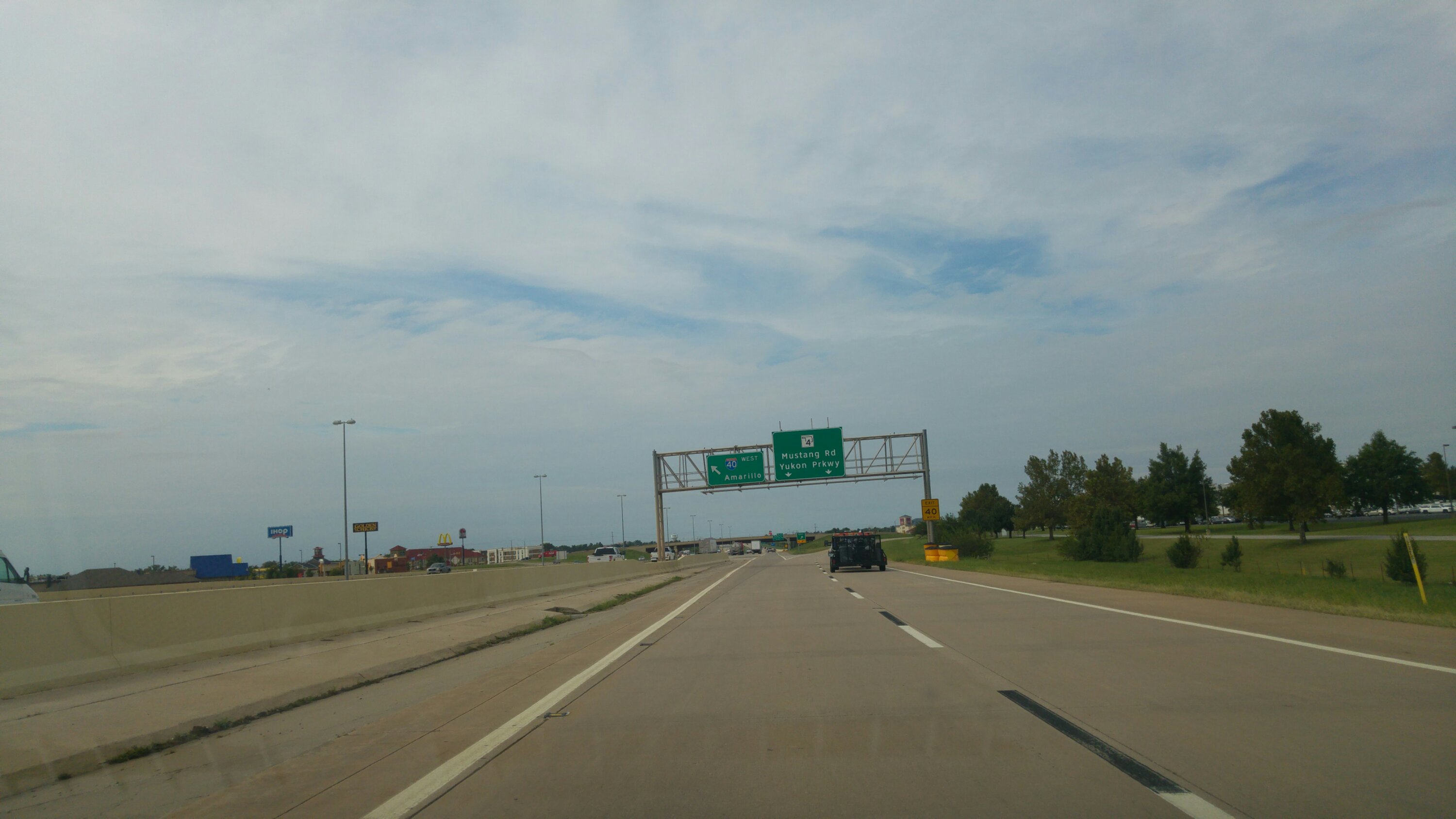 As we continue to travel west on Route 66 we’re optimistic that things will improve as we get closer to the west coast.  We must now be in what must be one of the worst and poorest areas, surely!!?